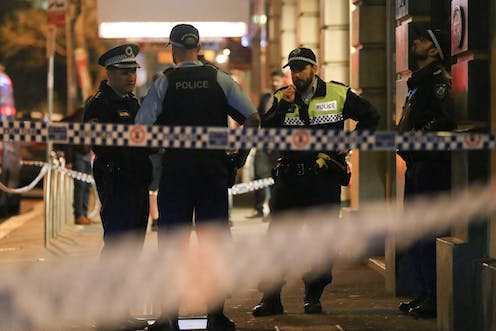 When news of the stabbings in Sydney on Tuesday afternoon came through, one of the first tweets about the incident came from Sky News reporter Laura Jayes.

Immediately it got retweeted and sent around the world, and I might have retweeted it myself, but for the voice whispering in my ear from my former BBC training, “two agencies and a correspondent.” This was the news editor’s mantra for having multiple sources for reporting breaking news back in the day.

But who would wait for that verification process to go through its paces today? If an eyewitness has seen or heard something, and it is reported by a reputable news organisation, isn’t that already two sources? As expected, it was the Wild West on Twitter that day, and news was updating constantly. On a breaking news story with video clips rolling in, people rush to retweet and they rush to judgement.

A storm then erupted on Twitter, with angry voices accusing Jayes of being variously “Islamophobic” or “unhelpful” and Sky News of being guilty of “stupid journalism”.

But was Jayes not correct to report what she had heard? One of her sources was her sister, who was at the scene at the time. Might a sister not trump a news agency or a correspondent in terms of verification? When news breaks, journalists search for the five Ws: “who, what, why, when, and where” plus how. It’s a journalist’s job to make sense of what is happening and to provide some answers. Video clips that flooded in from the street appeared to show Mert Ney indeed calling out “Allahu Akhbar”.

Of course, simply saying this doesn’t mean he is a terrorist, in the formal meaning of that term, linking his actions to a defined organisation. As Bernard Lane noted in The Australian a day later,

parroting a single Arabic phrase can’t be enough to make a sworn jihadi, and yesterday police knew of nothing to link Ney to terrorist organisations.

Exclusive footage later broadcast on Twitter by Channel 7, shot through the window of a police vehicle, again showed Ney repeating calls to Allah, saying he would protect him.

So, what do we have here? A man with known mental health issues, on the run after an alleged “domestic violence” incident in which he is reported to have attacked one of his sisters. Is this therefore about mental health, misogyny, religious conviction, terrorism or shades of all four? We cannot know this for certain now – in fact we may never know this. What we do know is that people with mental health issues have sometimes loudly proclaimed religious affiliations while carrying out violence.

Back in March, on the day of the Christchurch mosque killings, I wrote a piece for The Conversation, calling on people not to share the live video of the murders or the extreme right-wing manifesto of the killer.

I outlined why I thought this was a bad idea – namely, that it perpetrated and reproduced the hatred, might incite copycat killers and could cause problems for the prosecution (in finding jury members who had not seen the video). The platforms and media that had posted the video later took it down.

On day three of this particular Sydney drama, the NSW police commissioner Mick Fuller has not changed what he said on Tuesday night: that the attack was not being treated as a terrorist attack and that the perpetrator acted alone.

After coming under attack, Laura Jayes defended herself, saying:

While one can argue that journalists bring along their own baggage and slant to their stories, what she asserts is essentially correct. A good journalist should aspire to report the facts, as verified and known. As I have written before, conspiracies can fester when people feel the media is self-censoring and they are not being told the truth.

The argument here is not about republishing hate manifestos or showing people being killed. Rather, this is a clear case of a journalist publishing what she believes to be the case as recounted to her by someone whom she trusted. And I think she should. Once you have a trusted source, and a video to back it up, why wouldn’t you report what was said? People with sinister motives may go on to twist this information to their ends in further tweets, but the reporter simply reported what was said.

As we all become more sophisticated in reading the nuances in these sorts of stories, we can understand that just because somebody with a mental health condition shouts out an invocation to god, it doesn’t mean they have terrorist connections. They could in fact be scaremongering to try and provoke what is commonly called “suicide by cop”.

Reporters cannot hide obvious facts, as evidenced by video. Instead, adding information, background and context to stories, as they become available, is the best approach. And Laura Jayes did this,

Personally, I have no problem with Jayes’ reporting of this incident, but others might have different thresholds of what they think is appropriate disclosure. In this age of social media filming of breaking news, a video of somebody shouting and brandishing a weapon won’t get taken down, unless it shows the actual crime. Some media, on the other hand, may choose not to go there, which is their choice. Let’s keep the channels of discussion open.