Concerns are growing about Chinese influence on Australian universities. Some universities are reviewing research partnerships with Chinese state-owned companies after the ABC’s Four Corners revealed links to technology being used by the Chinese Government to carry out mass human rights abuses against the Uygur ethnic minorities in Xinjiang.

There are also reports the attorney-general’s department is looking into whether activities conducted by Confucius Institutes at Australian universities potentially fall foul of Australian’s foreign interference laws.

And the protests in Hong Kong against China’s controversial extradition laws have spilt over onto Australian university campuses, leading to scuffles between pro-Hong Kong and pro-China activists.

It’s a tough balancing act for Australia: being alert to the Chinese Communist Party’s potential for domestic influence and interference, while maintaining a relationship critical to our economic and strategic interests.

In March, foreign minister Marise Payne announced a A$44 million National Foundation for Australia-China Relations to “turbo-charge our national effort in engaging China”.

If Australia wants to understand China as a foreign policy partner and strategic actor, some of that effort should be directed at improving our collective understanding of the ruling Chinese Communist Party (CCP): its structures, its leaders and its military wing, the People’s Liberation Army (PLA).

Such expertise is spread dangerously thin across Australia’s universities and, to a lesser extent, think tanks.

The CCP calls the shots in China, internally and externally. Unless we understand the Party’s objectives, how its leaders think and make decisions, our policies are likely to come up short. Australia must develop the intellectual acumen to see the world through China’s leaders’ eyes to manage the relationship on its own terms.

During the Cold War, Western governments recognised a strategic requirement to better understand the Soviet Union. They encouraged universities to develop specialist language skills and expertise on the Communist world.

Australia’s location, its alliance with the United States and its reliance on China for trade, mean knowledge of the party leadership’s machinations matters more to Australia than Cold War Kremlinology ever did.

Chinese language is widely taught in Australia, including through Confucius Institutes. But China Studies, as a discipline, is not currently structured or incentivised to develop expertise on China’s ruling CCP or the PLA.

Since the mid-1990s, Australia’s empirical research expertise on China (and Asia more broadly) has declined.

Few Australian universities offer courses on Chinese politics, while those that do tend to be historically focused. The study of Chinese culture, literature and philosophy and other subjects commonly featured in the curriculum of China Studies, is perfectly legitimate.

But China-literate expertise in the contemporary political and security fields has atrophied to such a point that it needs to be addressed head-on, through active partnership between universities and government.

The knowledge gap is not only impoverishing the public debate. Universities are also incubators for Australia’s next generation of China experts who will populate government, business and academia itself.

This is a sensitive point, but universities should resist the temptation to hire China-trained academics as a quick fix to plug the expertise gap. Chinese-born Australians should of course be welcomed if they have received a liberal education outside of China. The language skills and knowledge they bring are invaluable. 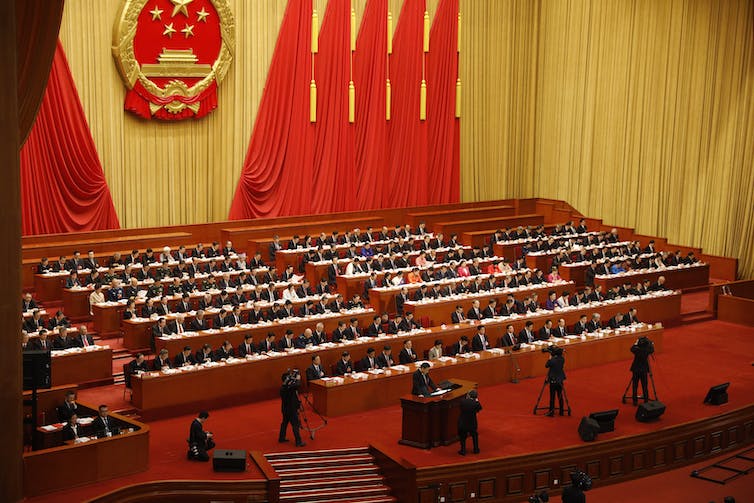 The Chinese Communist Party calls all the shots in China. Roman Plipey/AAP

But Australia needs a cohort of homegrown analysts, with the ability to read source material in Mandarin, who are motivated to pursue a career here, whether in academia or in government.

A healthy public discourse requires strategists, linguists, economists, historians and political scientists to contribute, as each sees the “problem” from a different angle. Moreover, the China debate is too important to leave exclusively to country experts, some of whom have a vested interest in preserving their access and networks in the PRC.

Academia is not playing the role it could and should to raise Canberra’s policy game and elevate the public debate on China. The government should explicitly identify this as a knowledge gap for Australian universities to fill.

How should the government do this?

The focus of these efforts should be on investing in individuals rather than on setting up new centres. An external review completed last year judged that the Australian Centre on China in the World, set up in 2010 at the Australian National University and the recipient of A$53 million in federal funding, was “faltering and cannot be said to be meeting expectations”.

This is a salutary reminder of the potential wastage of a centre-led approach.

Instead, resources should be invested in funded positions, scholarships and tied research programs to support and incentivise a new generation of China scholars specialising in CCP elite politics, the Party’s influence over foreign policy, the PLA and other designated strategic subjects, such as cross-Strait relations.

More doctoral research should be encouraged, provided there are enough qualified supervisors in academia. The government should be explicit in its riding instructions, but the conduct of research and academic appointments must be left to universities.

Resources should also be spread to ensure a pool of expertise across universities and think tanks, to avoid over-dependence on any one institution. Given Australian universities’ financial reliance on Chinese international students, a diversified approach makes sense.

This could be achieved by creating research networks that pool expertise across institutional boundaries, linking universities and think tanks, and by selecting institutions that are less susceptible to self-censorship or pressure from pro-Beijing organisations, on or off campus. Universities that rely heavily on China for student recruitment or co-funded research are most vulnerable in this regard.

Read more: Australian universities must wake up to the risks of researchers linked to China's military

Senior officials and diplomats could do more to engage leading scholars on China, including offering regular briefings and providing guidance from the intelligence community on partnership and interference risks. China experts schooled on elite politics and the PLA can contribute directly to government intelligence assessments by challenging or refining key judgements.

Unfortunately, academic freedom cannot be taken for granted on topics deemed sensitive by the CCP such as Taiwan, Tibet, Xinjiang or even Hong Kong.

Building a cadre of China experts with the necessary language skills and knowledge to help Australia meet the complex policy challenges ahead won’t have an instant payoff. This is a long game – but a crucial one.

This is a modified extract of an article that first appeared in Australian Foreign Affairs.