Colombia is the second most biodiverse country in the world with more than 56,000 recorded species, some 9,000 of which are unique. However protecting and researching this natural treasure has been extraordinarily difficult during Colombia’s nearly...

Colombia is the second most biodiverse country in the world with more than 56,000 recorded species, some 9,000 of which are unique. However protecting and researching this natural treasure has been extraordinarily difficult during Colombia’s nearly 55 years of internal conflict.

Since the 2016 peace agreement 21 scientific bio-expeditions have been carried out, most in areas that were previously conflict zones. This has led to the discovery of more than 150 new animal and plant species.

Read more: Ecotourism could be making animals less scared, and easier to eat

This flowering of research offers a new opportunity to the thousands of ex-combatants now looking for productive and peaceful work. We worked with former guerrillas in our project GROW-Colombia to train them to protect Colombia’s biodiversity. 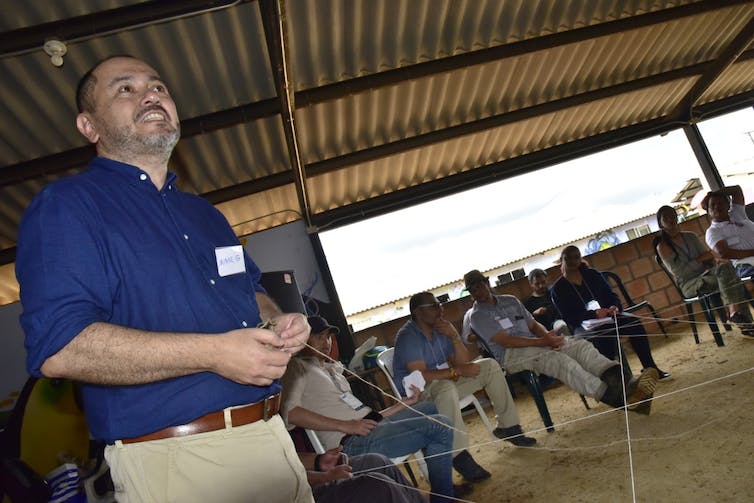 Who are the ex-combatants?

A huge effort to reincorporate these combatants back into civilian life is under way. Paramount is finding suitable jobs, to rebuild the country and offer stable wages.

A recent census found the former Revolutionary Armed Forces of Colombia (the FARC-EP) consists of some 10,000 people. Ranging between their 20s and 40s, around three-quarters are men.

Around 40% of these ex-guerrillas have experience in environmental conservation, and 70% have agricultural skills. Some 10% would like to work in veterinary, aquaculture and animal production fields, 60% in agriculture, and 84% in terrestrial and river environmental restoration.

There is also increasing interest in ecotourism in the 26 Territorial Training and Reincorporation Spaces (ETCRs) where the ex-combatants are currently based.

Their interests, the new political environment, and nearly 20 tourism initiatives in the ETCRs provide a unique opportunity to promote biodiversity as part of the peace process.

We wanted to teach ex-FARC-EP combatants some basic conservation skills and identify the potential of nature to create sustainable business opportunities.

We started with a national workshop with the representatives of 16 ETCRs from across the country. These members reflected on their personal and scientific perceptions of the natural world, mapped ecosystems in their local areas and canvassed ecotourism projects. We then discussed the contributions they made to protecting biodiversity before the peace agreement.

One participant, Curruco* had his own farm before being displaced by the armed conflict. He told us,

our participation in the workshops is evidence of our commitment to peace. We protected the fauna and flora during the conflict.

We then used case studies to teach our workshop members how to take inventory of the species in a given area, explored tourism of nature and conservation in Colombia and discussed business models for the use of biodiversity in ecotourism enterprises. 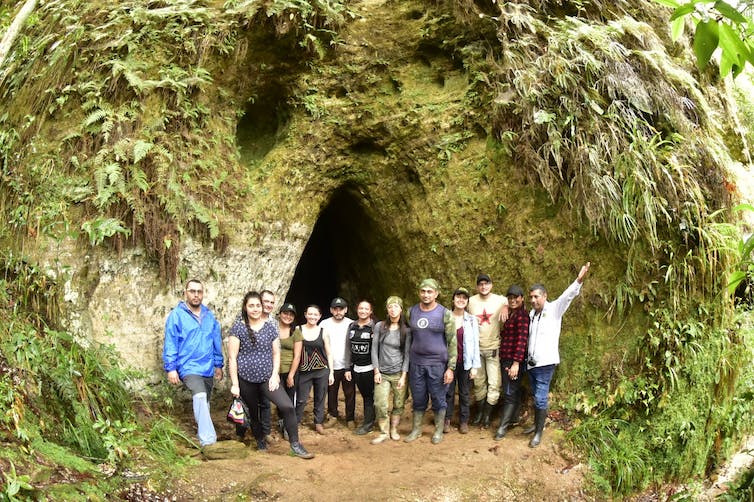 One of the most interesting parts for the ex-combatants was learning techniques for making inventories. We used teaching stations where they learnt about indirect surveys, for example using footprints and faeces, and direct observation and capture. We covered the use of binoculars, trapping cameras, tablets and mobiles, access to taxonomic identification resources and some basic non-invasive sampling methods.

One of the participants, Solangie, had a remarkable knowledge of the Amazon forest. She said:

I enjoyed all the content of the training but I like the bird sightings and plant cataloguing the most because during my time as a combatant we were living among the fauna, including tapirs, reptiles, frogs and butterflies.

I was impressed with the training about plants because in our time in the jungle we used plants as medicine and health treatments.

We then used these skills in practical field work to collect and inventory plants, sight birds and explore caves. The resulting notes and photographs were documented with iNaturalist, an online repository considered a major drawcard in engaging the public in science around the world. 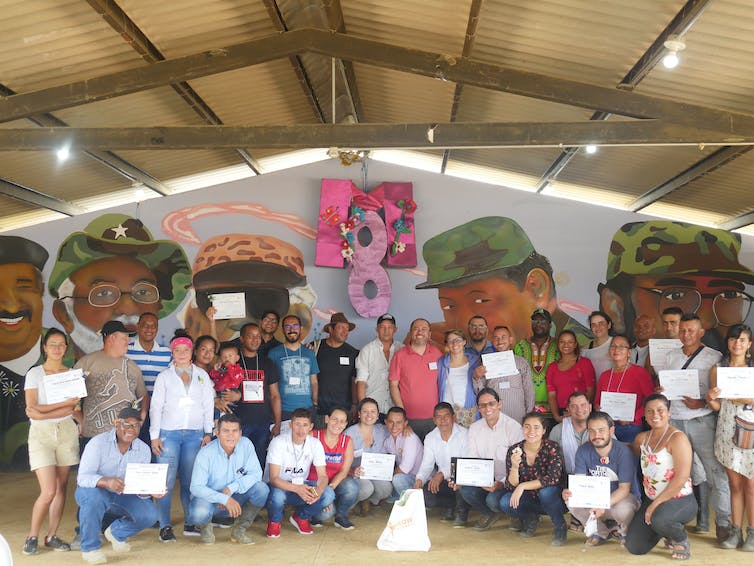 We also wanted to give our participants a clear idea of how this knowledge could become profitable work. We hosted a business network forum, and 60 meetings were organised so FARC-EP ex-combatants could meet representatives of the major Colombian research institutions and agencies and gain support for their ecotourism and biodiversity initiatives.

Yesenia*, a mother of two, joined FARC at a young age after the paramilitary killed her parents. During the research, she said:

If we want this peace process to succeed it will require the continued involvement of the various components of society, including scientific institutions and universities.

Our work established two levels of organisation: a national biodiversity committee of ETCR representatives from across the country, and a committee of government and non-government institutions and agencies to coordinate and support their biodiversity and ecotourism initiatives.

All of this may sound relatively simple, but this is new and life-changing knowledge for people who were part of an armed conflict, fighting in the jungle against the government.

One of us, Jaime, lived part of his life under this conflict, and found it very moving to see how the climate of trust has been changing. While there are, of course, considerable challenges, this was unimaginable before the peace agreements.

The authors would like to acknowledge the support of the University of Amazonia, Research Institute of Biological Resources Alexander Von Humboldt, Sinchi Amazonic Institute of Scientific Research, COLCIENCIAS-Colombia BIO, United Nations Development Programme, National Natural Parks Colombia, Vice-Ministry of Tourism, Social Economies of the Common, Agency for Reincorporation and Normalisation, Verification Mission of the United Nations, British Embassy in Colombia, ETCR participants, the GROW Colombia team at Earlham Institute, The University of East Anglia and The University of Sydney.