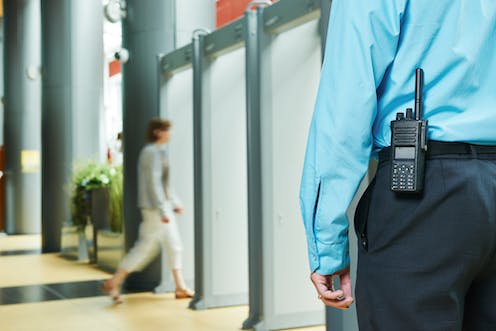 Yesterday’s strike by NSW hospital staff over security concerns has highlighted just how serious the issue of workplace violence has become for health-care workers.

The Health Services Union, whose members include administration, cleaning and security staff, as well as paramedics and other health professionals, has reportedly called for measures including 250 more security guards across the state to better protect workers.

But tackling the growing problems of violence in our hospitals is about more than beefing up security numbers. Violence in our health-care system is also not limited to inner city hospitals, and it doesn’t just affect staff in emergency departments.

Read more: I was stabbed 14 times at the hospital where I work. I survived, but not everyone is so lucky

How big a problem is violence in our hospitals?

The levels of violence in hospitals have been steadily increasing across Australia.

Patients are the main source of this violence, and this includes the parents of children admitted to hospital.

Media attention is often focused on high-risk areas like the emergency department and mental health settings. However, violence occurs everywhere in the health-care system, from the community to hospital wards, even birthing suites.

The impact of violence on health-care staff includes physical and psychological reactions. Symptoms associated with post-traumatic stress disorder such as sleeplessness, nightmares and flashbacks have been reported and can persist for up to 12 months.

Violence towards health-care staff has also been linked to perceived poorer patient care.

Where do security guards fit in?

Rising levels of violence against health-care workers suggest current security measures are not a sufficient deterrent.

Despite union calls for more security guards, an interim report NSW Health commissioned looking at how to improve hospital security did not recommend this.

But an increase in security guards is warranted when you consider that some rural and regional hospitals have minimal, or no security presence; staff in these facilities have to rely on the police for help if they encounter a violent patient.

In fact, staff in regional and remote areas experience the same levels of violence as their metropolitan colleagues.

A NSW Health spokesperson says the author of its hospital security report is visiting hospitals in rural and regional areas to understand their security challenges and this information will be included in the final report, due by the end of the year.

Read more: The problems with Australia's hospitals – and how they can be fixed

While an added security presence may be warranted in some circumstances, more security guards would not impact staff working outside hospitals, including paramedics and community nurses.

Then there’s the quality of security guards. Health is a unique environment where traditional security measures can be counter-productive. For instance, if guards use inappropriate communication when people are anxious and stressed they can increase the chance of a situation escalating.

What’s needed are specially trained health security guards, working with doctors and nurses, as part of a multidisciplinary rapid response team. This doctor-led team would be called in to manage violent behaviour, for instance to “take down” a violent patient.

Read more: Alcohol leads to more violence than other drugs, but you'd never know from the headlines

The Health Services Union has reportedly called on the NSW government to commit A$50 million for a proactive security team at hospitals, including staff trained in mental health, drug and alcohol abuse.

This makes sense as patients under the influence of alcohol and/or drugs, including ice, and those with mental health issues, are the ones most likely to be violent.

It’s not just about emergency departments

However violence in health care extends beyond the emergency department to all clinical specialities and beyond the walls of a hospital.

In a recent study of NSW nurses and midwives, staff discussed the physical design and layout of wards, and areas that should be secure but aren’t, as reasons they felt unsafe at work.

In particular, they described feeling unsafe returning to the car park in the dark, often with no security personnel present and in poorly lit conditions. Lack of duress alarms, poor placement of duress alarms or non-functioning duress alarms were also an issue.

Read more: Violence against nurses is on the rise, but protections remain weak

Time for governments to act

The NSW interim report into hospital security acknowledges some shortcomings in the current management of violence in health care and as such is a positive step in reducing the risk to staff.

However, the persistent nature and increasing levels of the violence mean that the state government needs to prioritise the safety of all health-care staff.