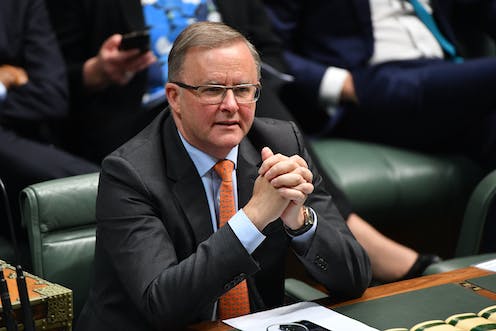 Although his circumstances are vastly different, Anthony Albanese is in sync with Scott Morrison in using the authority of leadership to the maximum.

In Albanese’s case, this has ranged from his determination to expel rogue union official John Setka from the ALP (a work still in progress) to new question time tactics and the opposition’s handling of the government’s wedge politics on legislation.

As Labor continues to absorb the consequences of its defeat, this week Albanese gave his caucus a sharp lecture about the harsh realities of this parliament.

Highlighting that the post-election Senate crossbench is much less pliable for Labor, he said the situation was effectively akin to when the Howard government won control of the upper house.

Unable to secure amendments to legislation, “we will often be confronted with circumstances where we have to vote on an issue which involves measures we agree with and measures we disagree with”, Albanese said. “The government is wanting to focus on us, with claiming every piece of legislation is a test for Labor”.

Albanese’s tough talk was timely. In the just concluded parliamentary fortnight, the Coalition has used every opportunity to corner Labor, and it will go on doing so. On Thursday, it foreshadowed bringing back after the winter break legislation from last term for a drug testing trial for some Newstart and Youth Allowance recipients.

It tries to maximise the pressure on Labor with its endlessly repeated challenge, “whose side are you on?” Eventually, this prompted a detailed listing by Albanese of who and what Labor sided with.

Given the situation in which it finds itself, Labor can’t win - it can only try to cope as best it can.

When it attacks government measures, and then votes for them, its critics denounce it as inconsistent. If it turned everything into a last-ditch fight, it would be cast as the perennial naysayer, and mostly it would lose anyway.

Albanese’s approach is for Labor to pick carefully which issues it takes to the wire.

Labor will oppose the bill to repeal the medevac legislation, the outcome of which will depend on Jacqui Lambie. It will also maintain its stand against the legislation to toughen the rules against bad behaviour by unions and their officials. But it has been voting with the government on security measures, albeit with some concerns.

Despite the opposition’s general impotence, Albanese’s revised question time tactics – precise questions trying to force answers rather than get TV grabs – is an improvement, and scored some hits on Energy Minister Angus Taylor.

So far, Albanese has managed to keep a demoralised team united, when it wouldn’t have been surprising to have seen massive bloodletting after an election that Labor should have been won.

But it is very early days, and there’ll be lots of arguments ahead as Labor digs into the reasons for its defeat and looks to refashion its policies. That debate will start to crystallise when the party’s election review is finished later in the year, and as the deep dives begin on whether particular policies should be filleted or scrapped entirely.

Kim Carr, Senate veteran and former minister, writing in the July edition of The Tocsin (put out by the John Curtin Research Centre), has rejected the “just wipe the slate clean and start again” prescription, warning against simply concluding Labor’s “redistribution agenda, paid for by reform of the taxation system, was a fundamental mistake”. Rather, Carr argues, there was “a massive failure of messaging”.

“Labor failed because its messaging essentially appealed to affluent voters rather than to the blue-collar voters who provide – though not as strongly as was once the case – its core support, and who typically decide federal election outcomes,” Carr says.

“We paid insufficient attention to the anxieties and insecurities that working-class families have about the future,” he writes. “We lost the trust of too many of our own people, while paradoxically winning the trust of many voters in seats that have long been Liberal heartland”.

Finding ways to re-engage with these voters will be harder than identifying their loss. It can lead to some strange contortions.

Take the issue of coal, which cost Labor dearly in Queensland. When Liberal backbencher Craig Kelly (one of the anti-NEG cabal that helped bring down Malcolm Turnbull) last week challenged Labor’s resources spokesman Joel Fitzgibbon to co-chair his new Parliamentary Friends of Australian Coal Exports group, set up “to acknowledge and celebrate the invaluable contribution that Australian coal exports make to our nation,” Fitzgibbon immediately agreed.

From the vantage point of Fitzgibbon, who holds the coal seat of Hunter in NSW, this sends a signal, on high volume, about his commitment, as well as saying something more generally about the ALP’s post election position. Nevertheless, while participation doesn’t contradict Labor policy on climate change and coal, the Kelly-Fitzgibbon alliance does seem an odd coupling.

As the Labor team shakes down, Bill Shorten – still deeply bruised – emerged briefly in question time this week. But he and last term’s frontliners Chris Bowen and Tanya Plibersek remain near invisible.

In contrast, one player coming strongly into focus in the new Labor firmament is former NSW premier Kristina Keneally.

After the election, Keneally crashed through the internal party processes to become Labor’s deputy leader in the Senate. She shadows Peter Dutton in home affairs, and seems to be everywhere. This week she was in the headlines calling for controversial British right wing activist Raheem Kassam to be banned from coming to Australia to speak at the Conservative Political Action Conference in Sydney next week.

Keneally even attracted an attack from Donald Trump’s son, Donald junior, who tweeted his condemnation.

It is difficult to judge how Albanese will fare this term but you can bet Keneally will be making plenty of splashes.