Attending the opening night of a world premiere performance of a new Australian opera is an exhilarating experience - though one that requires a bit of pre-performance research. This is not the first Australian opera that has been based on an iconic novel: recent others include Cloudstreet (2016), Bliss (2010) and Voss (1986). 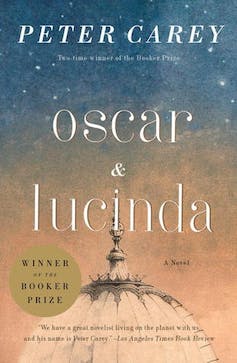 Like Cloudstreet and Bliss, Oscar and Lucinda was first a novel written by Peter Carey, then a film and then an opera. Should the opera viewer encounter these other versions first to get a true understanding of the plot and characters? The novel by Peter Carey contains short chapters where the characters are developed into distinct personas. The reader gains an insight into their very being. There is a duality of complexity and simpleness. The plot is a love story with a tragic end. It explores the relationships between the key characters, their addiction to gambling and the personal motivations for that addiction as well as an important element – that of “chance”. The film version (1997) starring Ralph Fiennes and Cate Blanchett, has so many successful elements - scenery, staging, a cohesive story line which is not broken by scene changes with titles or chapter headings - as well as the combined interpretations of the director and individual actors. Thus we come to the opera already familiar with the story, perhaps having also seen the film. The two operatic acts were broken into scene changes that presented the overall outline of the story. Because of the limited space and staging possibilities everything was minimal. The sets were few and sparse, the characters - except for the two main protagonists - played many different roles each. It was very clear, due to clever costuming and quick changes, which character was played at any time but still audience members had to employ their imagination to grasp the innate characterisations of the different roles. The libretto was highly narrative and kept to the important details of the novel’s plot. 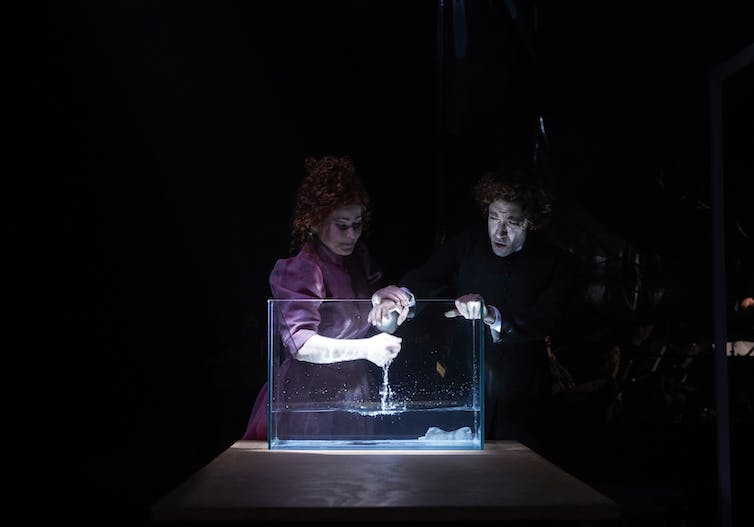 Oscar and Lucinda, Sydney Chamber Opera, Carriageworks. Zan Wimberley What then of the music? In an opera adaption surely the most important feature is the music and how well adapted to the story it is. Should it not almost tell the story without any visual component? Oscar and Lucinda is a tragic love story. Many operas share a similar plot. At the conclusion, one protagonist dies and the other loses her entire fortune. There are dramatic scenes – a big storm, other people die, someone’s murdered on stage and of course, there is a love scene. But in the opinion of this reviewer, the music did not react to or reflect the action on stage or in the story. 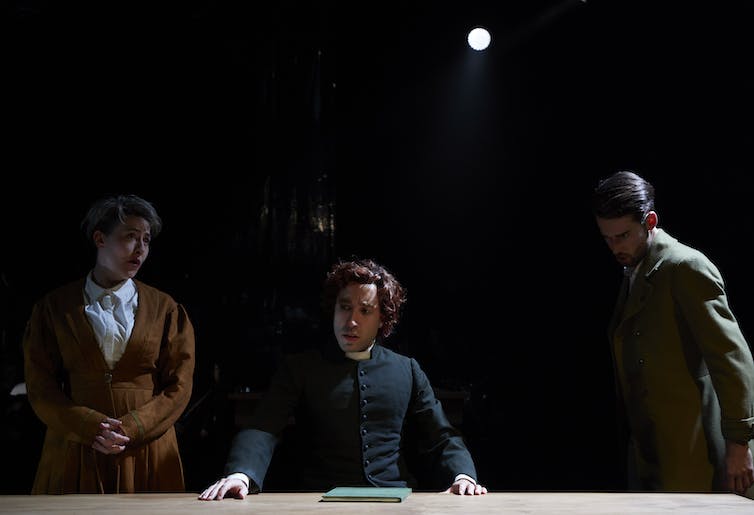 Oscar and Lucinda, Sydney Chamber Opera, Carriageworks. Zan Wimberley Had one not had the visual aspect and the text so wonderfully displayed on surtitles, hearing the music would not have given the listener the effect of what was transpiring. Should one therefore also, before attending the opera, study the music of its composer Elliott Gyger to understand how and why the music was conceived? It was a complex plot and a very complex score that at times sounded completely random. Gyger writes in the program notes: The guiding metaphor for the music is one not found in the novel …In a kaleidoscope, small fragments of coloured glass fall into arbitrary relationships which are then mirrored geometrically to create the illusion of order. Different settings of the kaleidoscope generate particular harmonic colours … If this was the guiding principle behind the composition then Gyger was successful, as the music does sound like a kaleidoscope, pieces of coloured glass falling into space. However, it seemed to this listener that the music never changed to reflect the story presented. 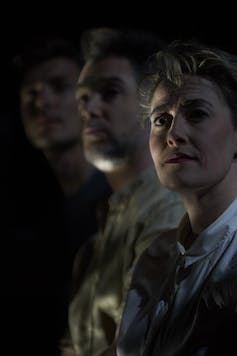 Oscar and Lucinda, Sydney Chamber Opera, Carriageworks. Zan Wimberley In the love scene, the kaleidoscope of colours did not reflect a warmth normally associated with such a scene. In the death scene, which was rather protracted, the colours were again so much of the sameness of other parts of the action. What began as colourful and very exciting became uninteresting and no longer captivating. The singers, however, particularly Jessica Aszodi and Brenton Spiteri in the title roles and the four other cast members – Jane Sheldon, Jeremy Kleeman, Mitchell Riley and Simon Lobelson who played a myriad of different characters - were excellent. One could only admire the virtuosity of their performances considering the complexity the music. Likewise, the orchestra and conductor Jack Symonds were fabulous supporting the cast with excellent balance and refined tonal colours. Lighting and sets, despite their minimalistic nature were completely appropriate, and created enough imagery for the audience to “get” what was happening. An exhilarating experience? Yes, to have been present at an opening night of an Australian opera definitely, but it was doubtful whether the music portrayed enough of the story line to warrant putting this story into an operatic medium. Oscar and Lucinda, a co-production and co-commission of Sydney Chamber Opera, Opera Queensland and Victorian Opera, will be performed from 27 July – 3 August 2019