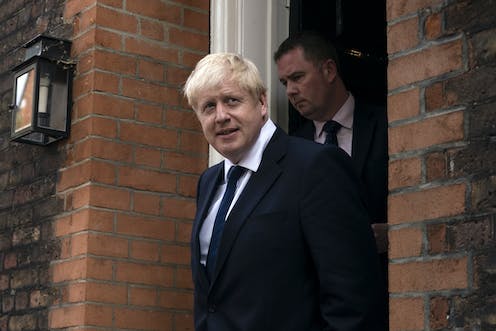 To no-one’s great surprise, Boris Johnson has been elected by the members of the Conservative Party to be the new leader, and by extension prime minister of the United Kingdom, taking over from Theresa May.

Such a turn of events seemed highly improbable a few months ago. Johnson is a polarising figure not just for the country at large but for his own party. An instantly recognisable figure with his unruly blonde mop, rotund Billy Bunteresque figure and fruity Etonian accent, Johnson is political Vegemite. He delights those who look for “authenticity” in their political leaders, often code for plain speaking, unscripted rudeness and lack of civility. He appals those who expect politicians to abide by some basic principles, uphold integrity in public life and seek to defend the common interest through negotiation and compromise.

Those who detect similar qualities in Johnson to those characterising Donald Trump would not be wrong. Both are noted for improbable haircuts, but beyond that they share a penchant for seeing politics in simplistic and antagonistic terms. Politics is a zero-sum game.

Read more: Tory leadership race: it's Jeremy Hunt (who?) vs Boris Johnson (yes, really), with the future of the UK at stake

For some to win, others must lose, and those others invariably include every shade of minority identity, whether it be Muslims, homosexuals, immigrants or otherwise feckless folk who need to try harder, do more, speak better English or in some other way accommodate themselves to the dominant majority.

For all of her faults (and there were many), Theresa May at least stood for a certain even-handedness, a recognition of the need for a centre-right party to build a coalition across disadvantage as well as advantage, and to respect differences. That accommodating rhetoric is likely to disappear with the end of her premiership.

But Johnson will succeed or fail on the back of the single dominant issue that dominates British politics: Brexit. How will his approach differ from that of his immediate predecessor?

Johnson has promised throughout his campaign to be leader of the Conservative Party that he will bring Britain out of the European Union by October 31, “do or die”. No going back to the withdrawal agreement. No compromise with the Northern Ireland backstop or with many other elements that so irritate the “hard Brexit” wing of the party.

So much for the rhetoric. The reality is that the EU is not going to change the withdrawal agreement. Nor will the House of Commons permit a no-deal Brexit. Only last week an amendment was passed that effectively demonstrated the strength of the anti-no deal majority in parliament.

This leaves very little room to manoeuvre. If Johnson remains true to the no deal rhetoric then we can expect a vote of no-confidence quite quickly in parliament, leading to elections perhaps as soon as November.

If, as seems more likely, Johnson manages to get the EU to change some words in the political declaration, such as the non-binding part of the withdrawal agreement, then he may seek to re-present what in essence was May’s deal back to the house in the hope that enough Labour MPs can be persuaded to join with the bulk of the Conservative Party (though not the hard-core European Research Group wing) to get it over the line. But this also seems improbable, likely leading again to an election.

A third possibility is that he recognises the intractability of the situation, and also the perils of calling an election as far as the prospects for his own party and premiership are concerned, and seeks a further period of negotiation with the EU. This might be for six months, a year or even more. Given Johnson’s well-documented desire to exercise power, such a scenario should not be ruled out.

But there is also fourth possibility, and this is the one that is exercising the greater speculation among the chattering classes in the UK. This is that recognising the lack of a majority for a no-deal Brexit in parliament, Johnson decides to “prorogue” parliament, a fancy term for suspending parliament in order to ram through an agreement on an executive basis.

Read more: Why Boris Johnson would be a mistake to succeed Theresa May

In effect, this is using the idea of “the will of the people” to overturn parliamentary democracy. The last time it was used in the UK was in the 1940s in order to undertake much-needed constitutional change to the status of the House of Lords.

The worry here, of course, is that this looks much more like the kind of “putsch”-style politics we are accustomed to seeing in banana republics than in one of the oldest democracies in the world.

So what many are wondering is whether behind the carefully confected image of a bumbling, playful figure so beloved of a certain wing of the conservative electorate, lies a neo-fascist figure willing and perhaps able to sacrifice democracy on the altar of English, as opposed to British, nationalism.