A Perth man who pleaded guilty to distributing an intimate image of his ex-girlfriend without her consent has been sentenced to a 12-month intensive supervision order, sparing him jail time.

According to media reports, Mitchell Brindley repeatedly created fake Instagram accounts under the name of his ex-girlfriend and posted nude photographs of her on the site.

Brindley is the first to be convicted under new laws that came into effect in Western Australia in April. The new laws carry a maximum possible sentence of three years in jail and fines of up to A$18,000.

What is image-based sexual abuse?

Image-based sexual abuse (or IBSA) is defined as the non-consensual creation, distribution or threats to distribute nude or sexual images (photos or videos) of a person. It also includes altered imagery in which a person’s face or identifying marks appear in a pornographic photo or video, known colloquially as “deep fakes.”

According to research we conducted for the Office of the eSafety Commissioner in 2017, one in ten Australian respondents had experienced a nude or sexual image of themselves being distributed to others or posted online without their consent. Young women aged 18 to 24 were among the most commonly victimised, as were Indigenous Australians and those with a mobility or communicative disability. 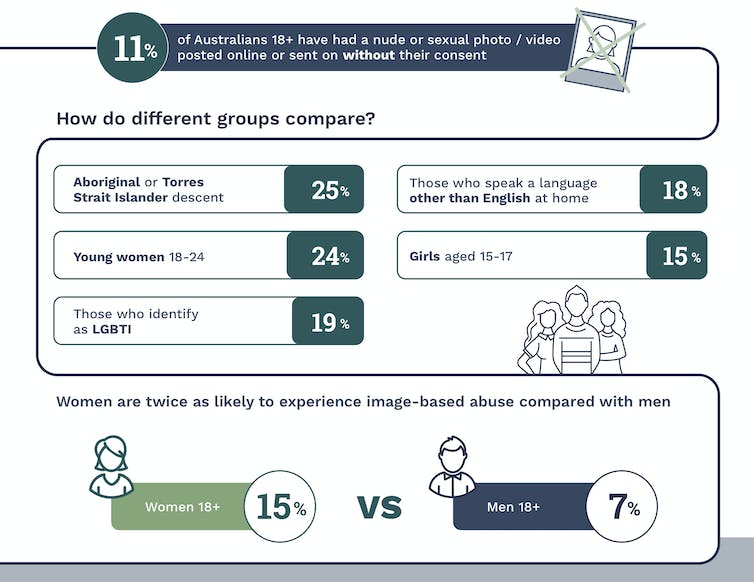 Prevalence of image-based sexual abuse among demographic groups in Australia. Office of the eSafety Commissioner

When the creation, distribution and threats to distribute a nude or sexual image were combined, we found that more than one in five (23%) Australians had experienced at least one of these behaviours.

We also asked our survey participants whether they had ever perpetrated image-based sexual abuse. One in 10 reported they had taken, distributed or made threats to distribute a nude or sexual image of another person without that person’s consent. Men (13.7%) were almost twice as likely as women (7.4%) to admit to doing this.

How does IBSA impact victims?

For instance, image-based sexual abuse is one way perpetrators of domestic violence attempt to coercively control a current or former intimate partner. Police and service providers have also described to us how images are used to threaten victims of sexual and domestic violence in order to prevent them from seeking help and reporting to police.

In other cases, nude and sexual images have been used as a form of bullying and harassment, particularly of young people. This can have severe impacts on a victim’s mental well-being, sometimes resulting in self-harm.

Many victims also experience high levels of psychological and emotional distress. In our study, we found approximately one in three people who experienced IBSA felt fearful for their safety – an indicator of potential stalking or intimate partner abuse being linked to the sharing of images online. 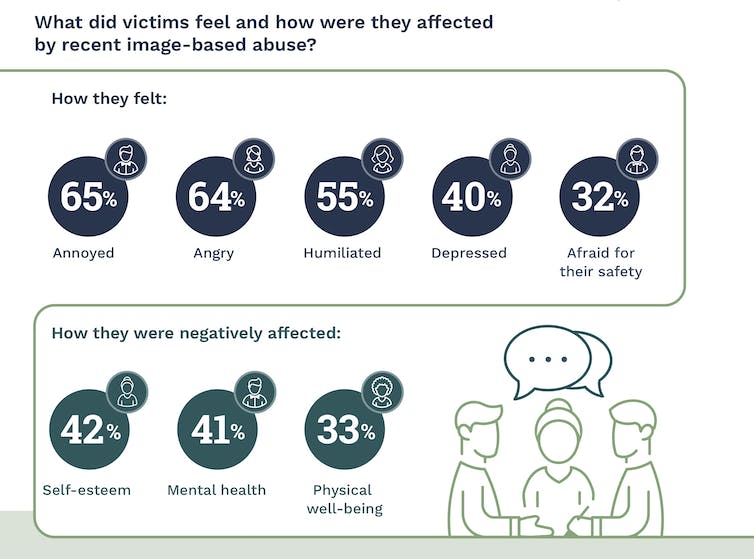 The impacts of image-based sexual abuse on victims. Office of the eSafety Commissioner

Justice responses to IBSA in Australia

Australian laws have come a long way in terms of responding to IBSA. Tasmania is the only state or territory in Australia not to have made it a specific criminal offence.

Several states and territories also allow victims of domestic or family violence to order their partners to destroy any intimate images they may have and prohibit them from distributing such images.

IBSA is also criminalised at the federal level under the Enhancing Online Safety (Non-consensual Sharing of Intimate Images) Act, which was passed last year.

Yet some victims of IBSA don’t want to go through the emotional burden of pursuing criminal charges against a perpetrator. They just want the abuse to stop and the images to be taken off the internet, removed or destroyed. In such cases, victims can report their case to the Office of the eSafety Commissioner, which can issue formal removal notices to social media companies and other online platforms.

It is therefore important we continue with a multifaceted approach including education, prevention and training, as well as support services and justice responses, in order to properly address this type of intimate harassment and abuse.

The Office of the eSafety Commissioner operates an online portal with information, advice and assistance for victims of image-based sexual abuse. Visit https://www.esafety.gov.au/image-based-abuse/