We have robots that can walk, see, talk and hear, and manipulate objects in their robotic hands. There’s even a robot that can smell.

But what about a sense of touch? This is easier said than done and there are limitations to some of the current methods being looked at, but we’re developing a new technique that can overcome some of those problems.

For humans, touch plays a vital role when we move our bodies. Touch, combined with sight, is crucial for tasks such as picking up objects – hard or soft, light or heavy, warm or cold – without damaging them.

In the field of robotic manipulation, in which a robot hand or gripper has to pick up an object, adding the sense of touch could remove uncertainties in dealing with soft, fragile and deformable objects.

Read more: Why you should always shake hands with a robot

The quest for smart skin

Quantifying touch in engineering terms not only requires the precise knowledge of the amount of external force applied to a touch sensor, but you also need to know the force’s exact position, its angle, and how it will interact with the object being manipulated.

Then there is the question about how many of these sensors a robot would need. Developing a robot skin that could contain hundreds or even thousands of touch sensors is a challenging engineering task.

Understanding the physical mechanisms of touch sensing in the biological world provides great insights when it comes to designing the robotic equivalent, a smart skin.

But a significant barrier for the development of smart skin is the electronics required.

Human skin has a multitude of sensors.

The sense of touch is generally measured by a sensor that can translate pressure into a small electrical signal. When you use a digital scale to weigh yourself or measure out ingredients in your kitchen, the scales are probably using a piezoelectric transducer.

This is a device that turns a force into electricity. The tiny electrical current from the transducer is then run through wires to a small microchip that reads the strength of the current, converts that into a meaningful weight measurement, and displays it on a screen.

Despite being able to sense different levels of force, these electronic devices have several limitations that make then impractical for smart skin. In particular, they have a relatively slow response time to the force.

There are other types of touch sensors based on a material changing its other electric characteristics, such as capacitance or resistance. Your mobile phone screen may have this technology built in, and if you use a trackpad on your computer it will certainly use touch sensors.

Read more: A robot that can touch, eat and sleep? The reality of cyborgs like Alita: Battle Angel

There has been great progress in recent years in making touch sensors that can be embedded into soft and flexible materials. This is exactly what we need for smart skin.

But many of these developments completely fail (due to the sensing type) in the presence of moisture. (Have you ever tried a wet finger on your smart phone’s touch screen?)

Water and some types of touch sensing technology do not mix.

Medical applications are now a main driver behind the demand for flexible and robust force sensing. For example, smart skin could be used to restore sensory feedback to patients with skin damage or peripheral neuropathy (numbness or tingling). It could also be used to give prosthetic hands basic touch-sensing ability.

Recently, researchers from MIT and Harvard have developed a scalable tactile glove and combined it with artificial intelligence. Sensors uniformly distributed over the hand can be used to identify individual objects, estimate their weight, and explore the typical tactile patterns that emerge while grasping them.

The researchers created a glove with 548 sensors assembled on a knitted fabric containing a piezoresistive film (which also reacts to pressure or strain) connected by a network of conductive thread electrodes.

This is the first successful attempt at recording such signals at large scale, revealing important insights that can be used in future design of prosthetics and robot grasping tools.

But just like almost all other touch interfaces that are designed with capacitive, resistive or piezoelectric techniques, this tactile technology does not work well with wet fingers or underwater.

Read more: Sex robots are here, but laws aren't keeping up with the ethical and privacy issues they raise

Optical force sensing on the horizon

To address this problem, we have developed a new form of tactile sensor that uses nanometre-thin films of organic LEDs (OLED) and organic photodiodes (OPD) for measuring soft touch.

OLED technology is normally found in television and smartphone screens. Our approach to measuring the sense of touch is based on optical force sensing.

The OLED elements (called diodes or pixels) are actually fully reversible. This means that as well as being able to produce light (like in a TV screen), these pixels can also detect light.

Using this principle we can manufacture a tiny, opaque, flexible dome with a reflective coating that is placed above some OLED pixels. Light emitted from the central pixel is uniformly distributed across all other pixels under the dome if the dome is not disturbed. 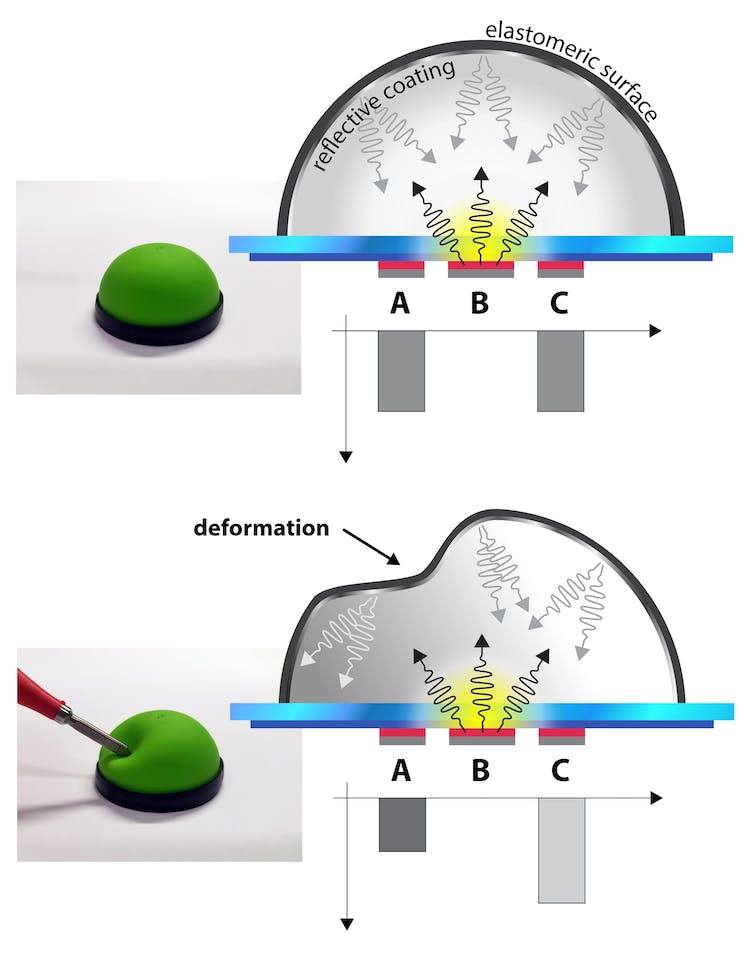 A single touch element made up of a dome over some OLED pixels. Top, when nothing touches the dome an equal amount of light reflects from the light emitting pixel B, to the light detecting pixels A and C. Bottom, when something touches the dome, it is deformed and the amount of reflected light changes between pixels A and C. Ajay Pandey, Author provided

But if the dome is pressed – by touching something – it will deform, resulting in an unequal response from the pixels being used to detect the reflected light. Combining the responses from dozens of these domes in the area of contact it will be possible to estimate the force being applied.

This approach is a significant step towards simplifying the smart skin layout for large area applications and we hope that we will soon see robots that can have full body sensing in the air, when wet or even underwater.