Why is the Sun orange when white stars are hottest? – Rain, age 6, Toowoomba.

Hi Rain. Thanks for sending in your excellent question.

The reason the Sun shines so bright is that it’s hot. And the colour it glows depends on how hot it is.

You are right that a star that glows white is hotter than one that glows orange.

And it’s true the Sun often looks orange. But it isn’t really orange. It is white. Well, it’s a bit on the yellow side but it’s mostly white.

But even white stars aren’t the hottest.

Read more: Curious Kids: What existed before the Big Bang? Did something have to be there to go boom?

The blue giants that burn bright and briefly

These blue giants are around 80 times larger than our Sun – so they are really, really big. They live and die very quickly. They are so hot and so big they burn through their fuel very quickly and last just a few million years.

That might sound like a long time but it’s not much compared to how long our Sun will live.

So blue giants are hottest, white stars are very hot, but there are also orange stars that burn less hot. There are even red stars, which are a bit cooler again. They are a half or even a quarter the size of our Sun and while they are still burning hot, they are nowhere near as hot as our lovely Sun. 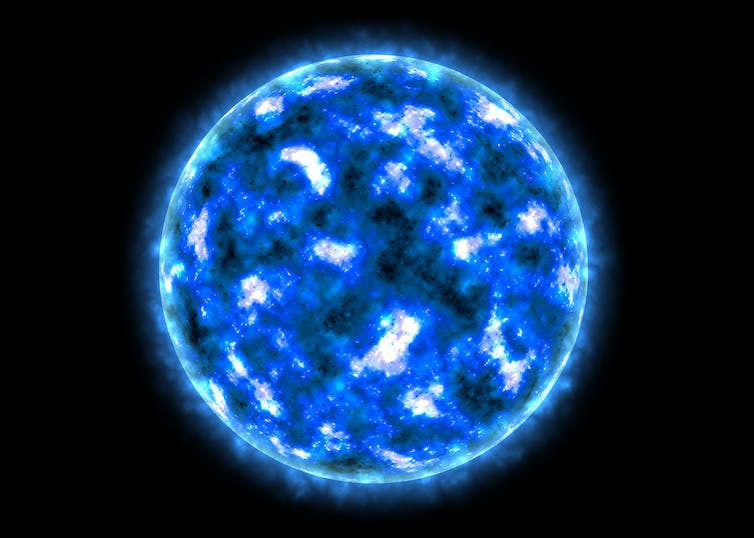 So why does the Sun look orange, then?

A lot of the pictures we take of the Sun make it look orange because of special filters we use to take the photo. The Sun is putting out so much light that we would not be able to photograph the detail on its surface unless we cut some of the brightness out. That’s what the filters do. 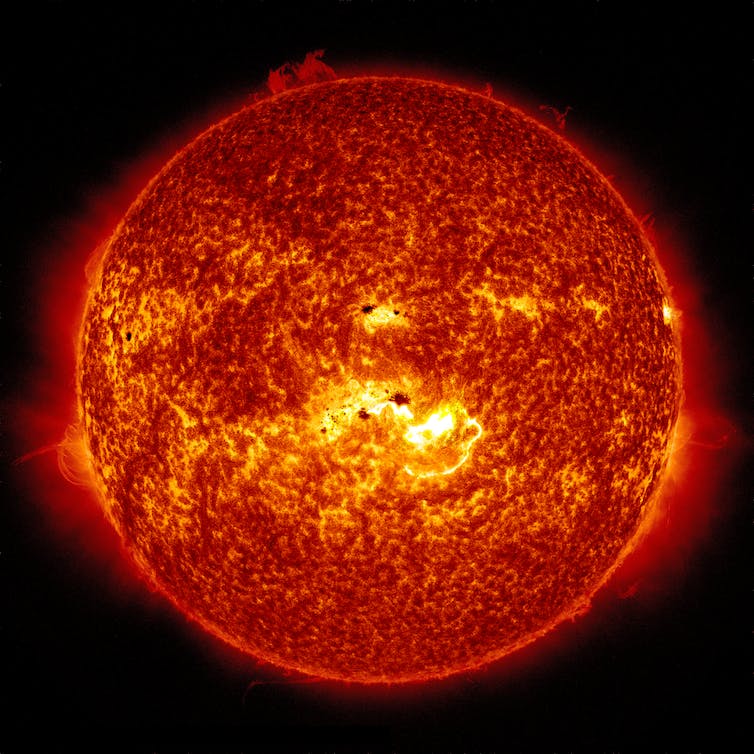 NASA uses filters to take photos of the Sun and the filters make it look orange. NASA

At sunrise and sunset, the Sun can look especially orange to our eyes. That’s because, at those times of day, its light has to travel through a lot of the Earth’s atmosphere (the layer of swirling air that surrounds our planet). And all the dust and stuff in the atmosphere makes the light scatter and change so it looks less blue and more orangey-red.

In the olden days, astronomers used letters to try to sort different types of stars. As we learned more about stars, the order changed, and labels became quite mixed up! Today we still use this naming system to remember the order of stars from hottest to least hot. It goes like this: O, B, A, F, G, K, M. (Some versions have more letters at the end).

The O-stars are the blue giants, while our Sun is a “G-class” star. That means it’s not the hottest but it’s not the coolest either.

Those letters are hard to remember, so astronomers came up with different tricks to remember it. One memory trick is called a “mnemonic” where you pretend each letter stands for a word. It’s easier to remember a sentence instead of a bunch of letters.

One student in my class came up with this mnemonic: “Only Bored Astronomers Find Gratification Knowing Mnemonics” (gratification means something like happiness).

Another one I like is: “Orange Butterflies And Frogs Get Knitted Mittens”.

Hello, curious kids! Have you got a question you’d like an expert to answer? Ask an adult to send your question to curiouskids@theconversation.edu.au Please tell us your name, age and which city you live in. We won’t be able to answer every question but we will do our best.