Australian literary classics are currently enjoying a comeback at our major theatre companies. Over the past three years Cloudstreet, Picnic at Hanging Rock and The Drover’s Wife, among others, have been adapted for the stage. At their best, stage adaptations recognise the cultural value of the original texts, while offering fresh insights for new audiences through the medium of theatre.

In keeping with this trend, Declan Greene has reinterpreted Kenneth Cook’s 1961 novel Wake in Fright at the Malthouse Melbourne. Greene’s is a radical adaption that tells the story of teacher John Grant’s outback nightmare through a multivocal and physical performance by actor Zahra Newman (who is also a co-creator of the piece).

Newman is alone on stage for the duration of the 70-minute performance, flanked by two members of the technical crew who, like musicians, annotate her performance with visual and aural spectacle.

In the novel and play, Grant finds himself in the fictional mining town of Bundanyabba or “the Yabba” on his way back to Sydney.

Grant is fresh meat for the alcoholic men of the town, who pour beer down his throat, lure him into a two-up joint, revive him with stringy meat, offer him a sweet girl, and send him on a kangaroo hunt and an endless night of debauchery. “New to the Yabba? Best place in Australia,” says everyone he encounters.

He is inducted into a menacing, bullying, violent masculinity that takes him to the abyss of despair. Our protagonist finally returns to Tiboonda with more questions than answers about the meaning of human life. 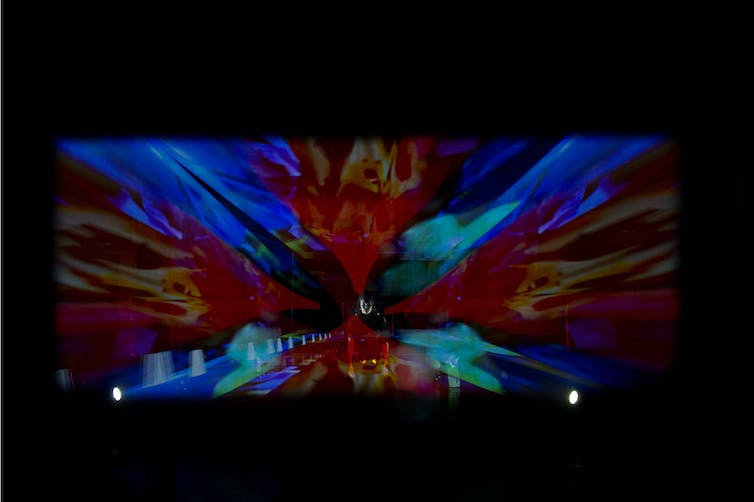 In Greene’s adaptation, Cook’s story is told with one actor accompanied by visual and aural spectacle. Pia Johnson

Read more: In Cloudstreet, nostalgia all too easily redeems Australia's colonial past

Those familiar with the novel, or with Ted Kotcheff’s 1971 film adaptation, enter the Beckett theatre with some trepidation. How will the young teacher’s nauseating beer-binge, and the infamous moments of kangaroo slaughter, be staged?

Instead, we’re unexpectedly greeted by the mascot Lead Ted – the friendly, cuddly bear designed in the 1990s to teach the children of Broken Hill how to avoid lead poisoning (Bundanyabba is said to be based on Cooke’s impressions of Broken Hill). Once everyone is seated, Newman appears from within the bear to banter with the audience about contemporary immigration politics, the exploitation of Uber drivers, and lead poisoning in Broken Hill. This introduction welcomes the audience and establishes a contemporary context for the adaption.

As Newman kindly warns the audience about noise levels, one suspects she’s also setting up for an imminent loss of audience rapport. Indeed, once the house lights dim, an invisible curtain descends between performer and spectator. As the story of John Grant’s hellish bender progresses, Newman digs deeper into the character and the separation is almost complete.

She brilliantly narrates the story, alternately voicing the town’s people and embodying Grant with a physicality that manifests his deteriorating mental state. Newman’s enactment of Grant’s unlucky night at the crowded two-up joint is a highlight. She shows how, like a boxer, he is up for a round, and then, dancing around the stage high on power and luck, he bets it all and loses.

Newman next voices the trio of manipulative alcoholics – Crawford the cop, Tydon the doctor (interpreted in the play as an expat white South African), and the Irishman Tim Hynes – who present the now-penniless Grant with a solution: have another beer. In this world, women are either housekeepers or sexualised daughters used as bait for male bonding rituals. Hynes’ daughter Janette is offered to Grant, who manages only to vomit noisily; Newman enacts his writhing and wretching on the stage floor covered in dust. 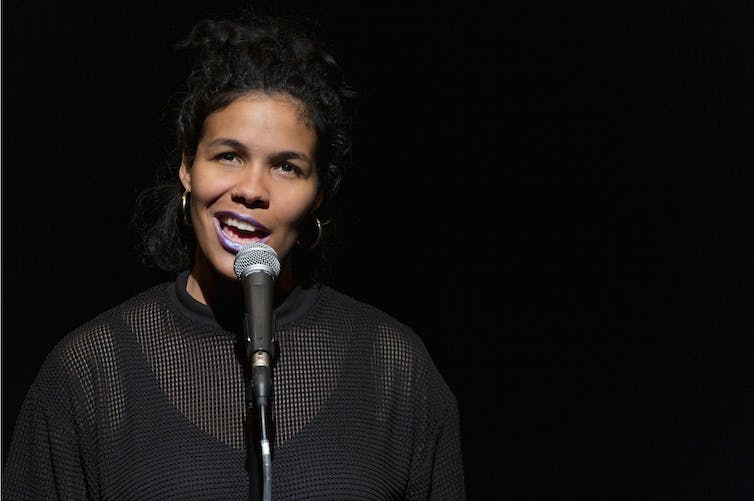 Zahra Newman acts as both narrator and a cast of characters in Wake in Fright. Pia Johnson

The horror depicted in the novel’s kangaroo hunt is translated into a techno nightmare of melting coloured images, glimpses of kangaroos, and loud amplified sound effects. While drawing on aspects of the hunt that are described in the novel as a “rush of visual effects”, a problem for the spectator with this virtuoso performance is that the specific cruelty of the kangaroo hunt is obscured. The audience is spared the detail of what lies behind the spectacle and with it the explanation of Grant’s breakdown.

The reader of the novel, on the other hand, experiences an innocent young “hero” undergoing a cruel initiation into outback life. Within that social environment, he finds himself capable of disembowelling dying kangaroos. In the book, only this act of human cruelty to an animal explains why Grant attempts suicide.

In the performance, the sight of Newman’s body harnessed to and suspended from a pulley ends the story, as a voiceover simultaneously explains that Grant returns to Tiboonda Station to begin another year of teaching – creating ambiguity about his fate.

Newman and the creative team wisely reject a naturalistic adaptation of the novel, full of fake beer and blood. The use of a sole narrator to voice and embody the multiple characters, the presentational style of direct audience address and the cross-gender representation of masculinity is engaging.

The spectator certainly experiences a theatrical take on the original – Newman’s female voice eviscerates the dominance of the male voices that endure in the novel. The question that remains in this adaptation is whether the audience has enough access to the background of the spectacle to leave the theatre with new knowledge of this Australian classic.

Wake in Fright is on at Malthouse Theatre until July 14.

Authors: Denise Varney, Professor of Theatre Studies and co-director of the Australian Centre in the School of Culture and Communication, University of Melbourne