Depicting the moment of creative inspiration has been a challenge for filmmakers since the first ribbon of film rattled its way past a camera lens. In numerous films, the artist’s studio has been mythologised as a tantalising mystery, a place of transgression, of wild imaginings and not infrequently, of sexual license and debauchery.

In search of a window into that most mysterious of all human activities – the creative imagination – historians, filmmakers and journalists have tried to prise open the mind of famous artists.

A long list of films purports to show these artists in the throes of inspiration as they create the certified masterpieces we see adorning galleries in the world’s museums. Indeed, we seem to be amid an artist-biopic tidal wave as directors pull focus on yet another famous painter (occasionally sculptor, even more occasionally, a woman) and present their interpretation of what actually goes on in that holy sanctum, the studio.

The most recent is Never Look Away, loosely adapted from the life of Gerhard Richter by Florian Henckel von Donnersmarck. It comes hot on the heels of Julian Schnabel’s At Eternity’s Gate, another retelling of Vincent van Gogh’s life story and Thomas M. Wright’s Acute Misfortune, which delves into Adam Cullen’s psyche. Other films are in the wings, examining the lives and work of L.S Lowry, Leonardo da Vinci, and Théodore Géricault. 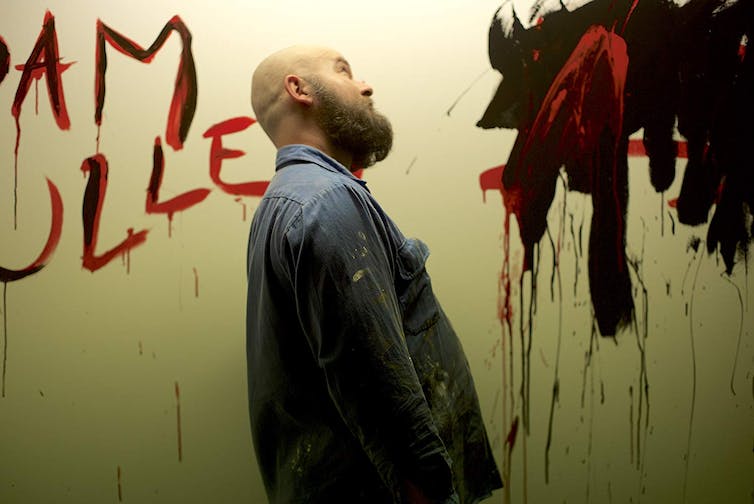 Disappointingly, there is still an absence of women artists in filmmakers’ mythmaking biopics. While there are wonderful examples, such as the films documenting the lives and work of Camille Claudel (1988), Frida Kahlo (2002) and Séraphine de Senlis (2008) they are rare exceptions.

Filmmakers are predictably entranced by their heroes it seems and eagerly trawl the depths of their practice to better understand the processes of artistic creation, but why is this topic of such interest to a general public?

One reason may be that creativity is being promoted as an essential skill for the fourth industrial revolution.

The World Economic Forum is calling for a lifelong approach to learning that encourages complex problem solving, critical thinking and creativity rather than the one-dimensional professional focus of the past. So, what better models could there be as the epitome of creative practice, than those great artists embedded in our collective conscience?

Read more: The creative process is more than one giant leap for humankind 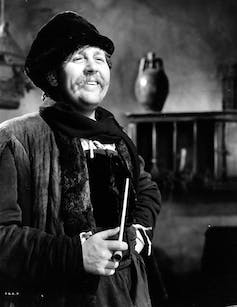 Famous artists have been the subject of popular films since Alexander Korda called action in 1936 and the cameras rolled on Charles Laughton shuffling through a vast studio in the guise of Rembrandt, sucking his pipe and wielding his mahlstick while creating an unseen masterpiece.

At least one scene, in which Rembrandt unveils a portrait of a powerful soldier to a hostile reception – an act of creative rebellion that ends a stellar career – is a total fiction. Still, it makes for a compelling scene.

In At Eternity’s Gate, Julian Schnabel, who is a famous artist himself, infuriatingly depicts Vincent van Gogh’s precarious mental state through a manic hand-held camera that has his audience lurching around in their seats seeking stasis.

Fortunately, Vincent’s own words, through his letters to his brother Theo, reveal something of the inner torment and the process of re-interpretation that brings some clarity and insight into how these wondrous images were formed on the canvas. (These letters also featured in Paul Cox’s 1987 film Vincent). Without these voice-overs, Schnabel’s film would invoke nothing other than incoherent queasiness.

Trailer for At Eternity’s Gate.

‘The scab that forms on the wound’

Florian Henckel von Donnersmarck’s epic portrayal of 30 years of German history, reflected in the life of a young artist seeking his way in the world, is not perfect. Still, it does go further than many of his predecessors in peeling back some of the unhelpful tropes that have blinkered our understanding of the creative process.

Like Korda, he is not squeamish about fictionalising the events in the life of his protagonist in the process of a creative re-imagining. Kurt Barnert – the lead protagonist in the film – is not Gerhard Richter, just a slightly blurred facsimile of the famous German artist.

In this way, von Donnersmarck gives himself license to reinterpret and refocus his understanding of how memory, pain, and anger can be fused in the act of making an image on a canvas.

In his studio in the Kunstakademie Düsseldorf in 1963, Barnert thrashes around re-making the works of contemporary American and German artists who have found success in the marketplace.

Waltzing with paint-soaked feet on a roll of paper, making papier-mâché figures and painting geometric abstractions, he finally resolves to fuse his undeniable technical virtuosity with his life experiences.

The black and white photographs he had packed in his bag on his flight from East Germany to the West were the catalyst for the works we associate with Richter; a soft brush drawn slowly over almost dry oil paint to create a blurring that seals the image as memory. 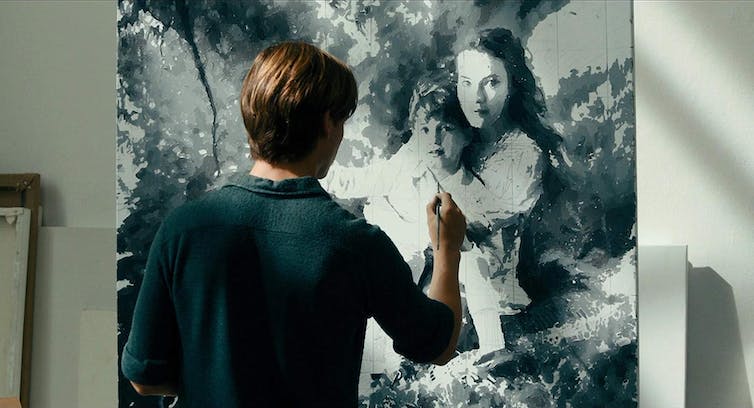 They are images that elicit complex responses from an audience who may not have experienced the same events but can relate closely enough to find solace.

Von Donnersmarck doesn’t entirely relinquish the stereotypes of depicting the “lightbulb” moment of creative insight. Like Korda’s pensive, pipe-sucking Rembrandt, Schnabel’s whirling dervish van Gogh and Carol Reed’s version of Michelangelo’s epiphany in his 1965 film The Agony and the Ecstasy – when an image of God holding out his hand to touch the finger of a recumbent Adam is revealed in the clouds to a spellbound Charlton Heston – we have Barnert and his blank canvas.

Trailer for The Agony and the Ecstasy.

Sitting for days staring at that tabula rasa, the wind rustling the leaves outside framed by the window in his light-soaked studio, the music slowly building to a crescendo, his artistic revelation comes.

However, von Donnersmarck has built layers of experience and memory into a complex amalgam of ideas over two and a half hours before we get to that scene. From a childhood visit to the Nazi Entartete Kunst (Degenerate Art) exhibition and the murder of his aunt, through his training and early success in the DDR under Soviet influence, we have seen Barnert build the armoury of skills and experience from which he will forge his artistic career.

In the process von Donnersmarck has developed his thesis that “creativity is the scab that forms on the wound” of these artists’ lives. “It gives us that wonderful feeling that our suffering can be of use.”

“Never look away, everything is beautiful,” his aunt tells the young Barnert. The transformative power of art is to embrace that freedom to engage without limits and “by freeing yourself, you are liberating the world”.