Sport science can offer some valuable insights to the teams contesting the 2019 Women’s World Cup currently underway in France.

Our new analysis of every goal scored at the last Women’s World Cup in Canada in 2015 revealed the most effective way for teams to put one in the back of the net – and it’s all about turnovers, quick movement, and transitions.

Read more: The gender pay gap for the FIFA World Cup is US$370 million. It’s time for equity

To date, there is very little published research on the strategies involved in women’s football. Our study at Edith Cowan University was the first of its kind to take an in-depth look at the most effective attacking strategies and goalscoring opportunities at a major international women’s football tournament.

Various factors played a part in scoring, such as:

Our findings showed that most goalscoring opportunities originated with a team gaining possession in the central midfield zone. This part of the pitch accounted for more than half of all possession gains during the 2015 Women’s World Cup.

The advantage of recovering the ball in this zone is that it gives the opposing team little time to organise into defensive positions, and also allows for space to pass the ball behind an opponent’s defence.

We also found that more teams gained possession and created goalscoring opportunities on the left side of the midfield compared with the right. This could be explained by the tactic of teams deploying right-footed players in left midfield positions, allowing them to play passes inside or behind defences on their stronger and preferred foot.

Read more: Women's World Cup: the science of what makes a good football game for fans

The attacking central zone, directly in front of the goal, accounted for about 15% of possession gains leading to goalscoring opportunities. The attacking team often caught their opponents in transition and off-guard, making goalscoring much easier. 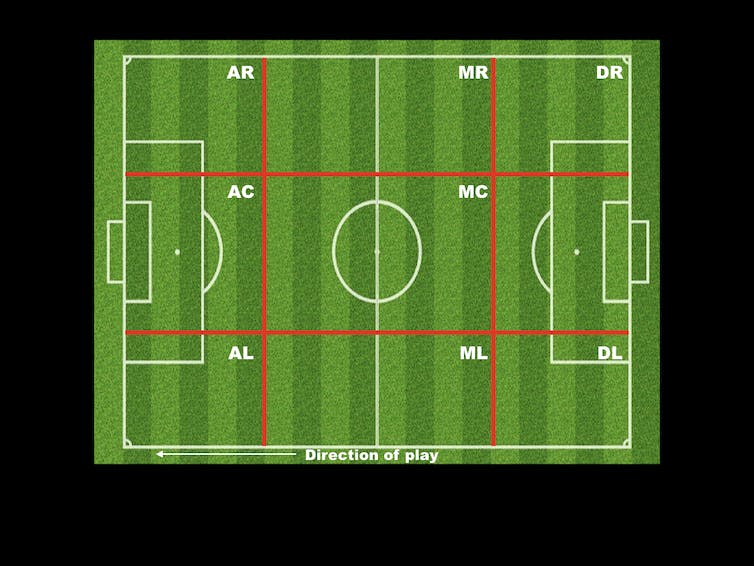 The nine zones on a football field. Author provided

When we looked at the type of possession gain that led to goalscoring opportunities, we found three that stood out:

Again, this could be the result of a specific tactic by teams at the World Cup to wait patiently for their opponents to make a risky pass, or for teams to use a compact defensive setup in midfield to pressure their opponents into making a risky pass they can try to intercept.

When it came to the type of goalscoring opportunity that was most effective, our findings weren’t surprising. Teams were most likely to score if they got the ball behind their opponents’ defensive line or by putting a cross into the box.

But a further look showed just how effective getting the ball behind an opponent’s defensive line was: a third of these opportunities resulted in a goal being scored. This was by far the most effective way for a team to score, followed closely by scoring from crosses.

How is the 2019 tournament shaping up?

In all of the games played in the first and second matchdays of the group stage, 51 goals were scored, with almost half of these (23) resulting from getting the ball behind the opponent’s defence.

And 36 of these goals came after a team regained possession and made no more than five passes, emphasising the speed with which successful attacks occur once possession is secured. 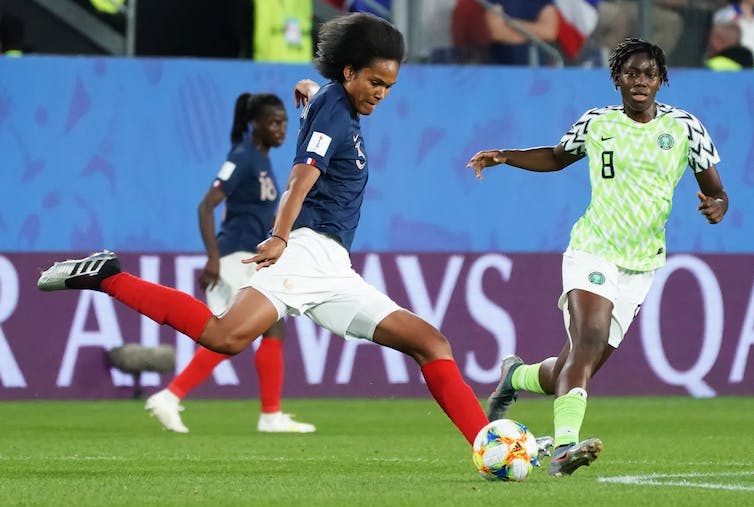 France has looked impressive so far during the 2019 tournament. Eddy Lemaistre/EPA

In terms of which team looks most dominant – and most likely to win – it’s hard to look past the traditional powerhouse United States. France has started well and has a team full of Champions League winners, while the Netherlands, the European champions, also look very good and have maybe the best striker in the tournament in Vivianne Miedema.

And Australia always looks capable of scoring with Sam Kerr on the pitch, it’s just a case of whether the Matildas can keep their opponents out of their end of the field.

Elise Kellond-Knight greatly improves the Matildas’ midfield attack, so expect to see her get the ball to the likes of Kerr, Hayley Raso, Caitlin Foord and Lisa De Vanna to create those all-important goalscoring chances.