Netflix officially entered the Australian market in 2015, and now reaches 50% of Australia’s adult population. Despite its remarkable success, Netflix has been a purely virtual operation – with no local staff, office, or “boots on the ground”.

This looks likely to change when Netflix opens its Australian headquarters later in the year. The company has hired two senior Sydney-based staffers – a head of publicity for Netflix originals in Australia/New Zealand, and a director of public policy – and is looking for office space to house what is expected to be a team of around 10 employees.

All this suggests Netflix may be inching closer to becoming a “local” media company, with an increased presence in our small but profitable national market. What might this mean for local screen producers?

The streaming revolution has brought with it benefits and risks for different parts of the industry.

On the positive side, Netflix and its local competitor Stan have introduced welcome competition into broadcast and pay-TV markets; provided the production industry with another distribution and funding source; picked up and revived series dumped by broadcasters; addressed underserved viewing communities; contributed to more cosmopolitan popular culture consumption; and provided a global platform for select Australian content.

On the production front, Netflix and Stan are largely responsible for the rapid growth – off a low base – in online drama expenditure, which totalled $53 million in 2017-2018 (for the first time, more than the total spend for kids’ television). However, this needs to be seen in the context of total production expenditure, which has fallen to a six-year low.

Another issue to consider is the government’s recent decision to extend the Post, Digital and Visual Effects and Location Offsets to streamers. Previously available only for broadcast, pay-TV and film producers, these schemes will now extend to Netflix, Amazon Prime and Stan, who can claim a refundable tax offset when producing in Australia.

This will have the knock-on effect of employing local production houses, actors and other businesses and is likely to further increase investment in the online drama category.

But one thing is for sure – if there is no move to incorporate streamers into the regulatory framework, the disparity between commercial broadcasters’ regulatory burden and that of foreign streamers will grow, strengthening the regularly-put case by broadcasters and pay-TV for deregulation. 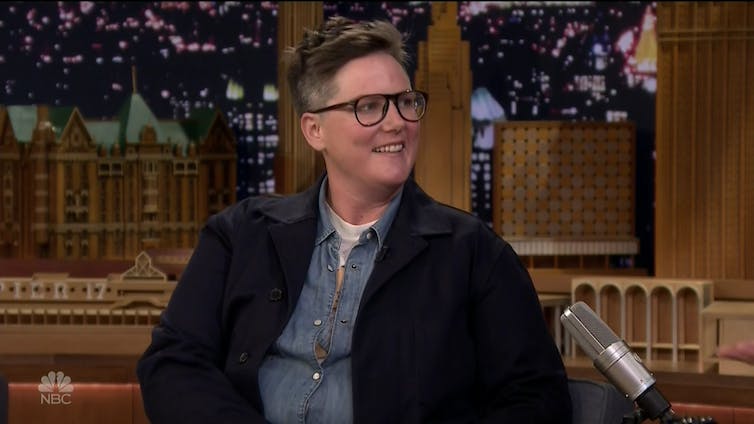 Hannah Gadsby during an appearance on CBS’ The Late Show with Stephen Colbert last year. The airing of her special Nanette on Netflix took her to a vast new audience. WENN/AAP

On the ground in Australia

This context is important for understanding why Netflix has chosen to establish an official Australian headquarters. Opening foreign branch offices is partly about shoring up a policy presence in jurisdictions that might need on-the-ground sensitivity, which would suggest Netflix expects heightened pressure for regulation to support local content.

Netflix runs most of its operations out of California, but has recently opened a number of overseas production hubs (including Toronto and Madrid), with regional headquarters in Singapore, Amsterdam, São Paulo.

A physical presence in Australia means that key Netflix decision-makers will be more accessible to local producers, policy stakeholders, and government agencies.

It’s too early to track direct correlation effects, but we should note that Netflix’s non-US offices are based in territories where they have commissioned much of their non-US original product, so that is a positive sign for future growth in investment in Australia.

However, it is important to stress that the company’s decision does not come with a promise to establish a global production hub. Instead, the Sydney office is likely to focus on policy liaison and managing the company’s advertising and PR budgets for Australia and New Zealand.

It will be interesting to see what other kinds of local activities may result. Stan, also based in Sydney, regularly uses its headquarters for premieres, viewing parties and marketing events.

Foreign production and distribution interests have long been a significant presence in the Australian television market. And history suggests that establishing local offices tends to increase media giants’ responsiveness to foreign audiences and governments.

Time will tell, of course, but Netflix’s move might be the latest stage in the gradual localisation of a global media giant.