On May 27, a 51-year old man went on a killing spree in the Japanese city of Kawasaki, located south of Tokyo. With a knife in each hand, he killed a 39 year-old man and a 12 year-old schoolgirl, and injured 15 school children aged between six and twelve as they waited for a school bus.

The attacker was detained at the scene, but later died from self-inflicted stab wounds to his neck and shoulders. A witness reported seeing the attacker swinging his knives and shouting “I will kill you” while children screamed for help.

A recent history of indiscriminate killings

The attacker was identified as Ryuichi Iwasaki. He grew up with, and was still living with, his relatives in Kawasaki city where the attack took place.

Those interviewed who knew Iwasaki did not seem surprised by the attack. His classmates from junior high school described him as a troubled child often losing his temper, behaving violently, and being bullied at school. More recently, Iwasaki was verbally aggressive to his neighbour because the leaves from the neighbour’s garden had brushed against him.

With the perpetrator dead, we are unlikely to get to the bottom of what motivated an apparently indiscriminate attack, but this incident isn’t the first time Japan has experienced a mass stabbings of this kind.

In 2016, 19 residents at a care home for people with mental disabilities were stabbed to death. A former employee at the care home who confessed to the killing claimed that:

it is better that disabled people disappear.

In 2008, a 24-year-old unemployed man who wanted to “end his boring life” went on a stabbing spree in Ibaraki, killing two people and injuring seven.

In the same year, a 25-year-old man stabbed and killed seven people and injured ten in Akihabara, a busy shopping hub in Tokyo. A month before the incident, the attacker wrote on an online platform:

I don’t have a single friend and I won’t in the future. I’ll be ignored because I’m ugly.

Children have also been victims of indiscriminate attacks. In 2001, a 37-year-old man killed eight children at a school in Osaka. He later told police:

I hate everything. I tried to commit suicide several times but could not die. I wanted to be arrested and executed by the death penalty.

Read more: The evidence is in: you can't link imprisonment to crime rates

Low crime rates, but fear of crime is growing

Despite these incidents, Japan remains one of the safest countries in the world.

According to the 2016 UNODC statistics, Japan’s rate of intentional homicide per 100,000 population is the lowest in the world at 0.3 (if we exclude Macau at 0.2), compared with 0.9 for Australia and the 5.4 for the United States.

For example, while the majority of the Japanese public supports the death penalty, the same survey respondents lacked basic knowledge about how it works, such as the number of people executed per year, or the method of execution. Respondents overestimated rate of homicides and violent crimes.

The perception gap between actual crime trends and public perceptions is not unique to Japan. It is seen in countries, such as the UK, US and Colombia. And while people generally believe that the crime is on the rise, they are less pessimistic about local crime and overly pessimistic about national crime rates.

The low crime rate in Japan makes a horrific crime like the Kawasaki stabbing newsworthy. The moral panic created by media coverage of horrific crimes in the past has an impact on public perceptions of crime, but also on criminal justice policy and practice.

Some researchers argue that public’s fear of crime, and politicians’ response to the fear, resulted in new legislation imposing more severe punishment on offenders. This widened the criminal justice net, with a greater proportion being diverted into the formal criminal justice process.

The result of the expanded use of criminal justice system to deal with deviance, combined with the ageing population, has resulted one in five prisoners being over the age of 60. Japanese prisons have been described as a “nursing home”. Recidivism is high among elderly prisoners because they lack family and financial support. In 2016, of the 2,500 prisoners over the age of 65 who were convicted in 2016, around a third had six or more previous convictions. 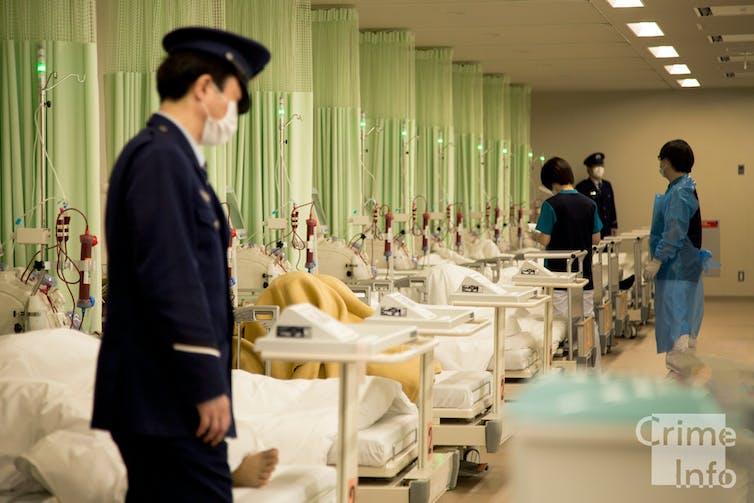 Prisoners receive dialysis treatment with at a medical prison in Tokyo as a prison officer watches on. CrimeInfo, Author provided

Lone attacks are different in Japan

After the Kawasaki stabbing, Japan’s education minister, Masahito Shibayama, announced that Japanese Prime Minister Shinzō Abe had instructed him to make every possible effort to secure safety at schools.

Unlike a number of lone actor attacks that have occurred outside of Japan in recent years – such as the Christchurch mosque attacks and the Pittsburgh synagogue attack – the attacks carried out in Japan are not motivated by right-wing ideology.

What lone attackers in Japan have in common are social exclusion and low social capital. A further expansion of formal social control through the use and threat of imprisonment is unlikely to prevent future attacks.

I grew up in Tokyo, where it was – and still is – normal for children as young as six to play without the presence of an adult, or to take public transport alone. I hope that the Kawasaki stabbing does not result in “indirect damage” that further excludes vulnerable people via the criminal justice system, or curtails the freedom and independence currently enjoyed by Japanese school children.