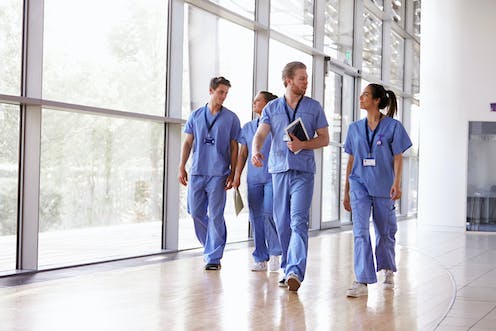 The re-elected Coalition government has some serious work to do with its state counterparts to get Australia’s tertiary education sector back on track. On current trends, participation rates in tertiary education – which includes university and vocational education training (VET) – will fall over the next decade.

A thriving economy depends on strong tertiary participation. A tertiary education qualification is increasingly a prerequisite for access to, and successful participation in, the labour market. Reversing the decline will be a shared responsibility between federal and state governments in collaboration with those in the tertiary education system.

The traditional model of going from school to tertiary education to work no longer fits. Experts predict that in 20 years Australians will need to double the amount of formal learning they do after the age of 21.

In a Mitchell Institute report released today, we argue the tertiary education sector of the future must allow students to move more freely between VET and higher education and gain the skills and knowledge they need at different times in their working lives. We also offer a blueprint to governments on how to achieve this.

University participation has been a good-news story over the last decade, especially for students who do not fit the traditional, more privileged, mould. In 2017, nearly 18% of new enrolments in undergraduate degrees were students from low-income backgrounds. This was closely approaching the Bradley review’s (a 2008 review of Australian higher education) target of 20%.

Read more: Why we need an independent authority to oversee tertiary education

This rapid increase placed pressure on government funding. The Coalition put a cap on university funding for subsidised (Commonwealth-supported) places in 2018 and 2019 and has only committed to increasing the numbers of places it subsidises based on national population growth.

Meanwhile, our analysis shows participation in the mainly state-funded VET sector has declined. This has occurred amid ongoing concerns about the quality of VET provision and fragmented funding models that vary wildly across states. The proportion of working-age adults engaged in VET has steadily fallen from a peak of around 7% in 2012. It may fall as low as around 3% by 2031 if current trends continue.

Australia can’t afford this either. Our future prosperity depends on a workforce with the skills only tertiary education can provide. By 2023, the Australian government estimates the labour market will add 886,000 jobs, and 86% of these will require the type of skills gained at either university or VET.

This problem can’t be solved by tinkering with the university and VET sectors in isolation. Meeting our future skills needs cost-effectively means looking at university and VET together. This is because the traditional divide between the types of skills acquired in both no longer exists.

Read more: Labor wants to restore 'demand driven' funding to universities: what does this mean?

Australians typically see universities as places for academically capable students heading towards professional jobs, while VET students develop technical skills for the trades. But this divide is breaking down as the skills required in the workforce are changing.

Jobs that require routine manual tasks (such as in manufacturing) are becoming less common while jobs involving non-routine and cognitive tasks, which require problem-solving and creativity, are increasing in all industries. This blurs the lines between what kind of learning is needed for which jobs and where it should be acquired.

Moving between VET and university

Making loans available to all students would go some way toward reversing the decline in participation. Student loans are only available for university and some TAFE courses, meaning too many students are deterred from study by upfront fees. Fees are most likely to deter students from low-income backgrounds.

Apprenticeships are a tried-and-true model of VET learning but aren’t widely used in universities. Many more careers could start with an apprenticeship, including in professional industries such as engineering, finance and IT. The Coalition’s commitment to funding 80,000 new apprenticeships is an opening to explore new possibilities.

Current funding arrangements for tertiary education are full of anomalies between university and VET. For instance, if a student studies nursing at university, they receive around A$6,000 more in government subsidies than a student studying nursing at a VET provider (such as a TAFE).

As well as contributing less to the cost of their studies, the nurse who graduates from university will earn more when he or she enters the workforce. This effectively penalises the student who chooses a VET pathway to enter a worthwhile professional career.

Federal and state governments need to work together to review funding arrangements (especially in VET) and design a fairer model.

The Australian Qualifications Framework (AQF) sets out the kind of learning each qualification provides and how to progress from one qualification to another. The AQF is under review, creating a chance to rethink the divide between the VET and university curriculum.

Each provides a distinct learning experience, but students must be able to move seamlessly between them.

The new government will soon be considering the results of several reviews of tertiary education. We can expect changes ahead, which may require new investment.

Yet an effective tertiary education sector pays for itself, in increased earnings, greater productivity and a reduction in the number of Australians who end up excluded from work and learning. Getting the tertiary sector back on track is vital to Australia’s future prosperity.