Over the past few days a pair of spectacular fireballs have graced Australia’s skies.

The first, in the early hours of Monday, May 20, flashed across the Northern Territory, and was seen from both Tennant Creek and Alice Springs, more than 500km apart.

Such fireballs are not rare events, and serve as yet another reminder that Earth sits in a celestial shooting gallery. In addition to their spectacle, they hold the key to understanding the Solar system’s formation and history.

On any clear night, if you gaze skyward long enough, you will see meteors. These flashes of light are the result of objects impacting on our planet’s atmosphere.

Read more: Look up! Your guide to some of the best meteor showers for 2019

Specks of debris vaporise harmlessly in the atmosphere, 80-100km above our heads, all the time – about 100 tons of the stuff per day.

The larger the object, the more spectacular the flash. Where your typical meteor is caused by an object the size of a grain of dust (or, for a particularly bright one, a grain of rice), fireballs like those seen this week are caused by much larger bodies – the size of a grapefruit, a melon or even a car.

Such impacts are rarer than their tiny siblings because there are many more small objects in the Solar system than larger bodies.

Moving to still larger objects, you get truly spectacular but rare events like the incredible Chelyabinsk fireball in February 2013.

That was probably the largest impact on Earth for 100 years, and caused plenty of damage and injuries. It was the result of the explosion of an object 10,000 tonnes in mass, around 20 metres in diameter.

On longer timescales, the largest impacts are truly enormous. Some 66 million years ago, a comet or asteroid around 10km in diameter ploughed into what is now the Yucatan Peninsula, Mexico. The result? A crater some 200km across, and a mass extinction that included the dinosaurs.

Even that is not the largest impact Earth has experienced. Back in our planet’s youth, it was victim to a truly cataclysmic event, when it collided with an object the size of Mars.

When the dust and debris cleared, our once solitary planet was accompanied by the Moon.

The story behind the formation of the Moon.

Impacts that could threaten life on Earth are, thankfully, very rare. While scientists are actively searching to make sure no extinction-level impacts are coming in the near future, it really isn’t something we should lose too much sleep about.

Smaller impacts, like those seen earlier this week, come far more frequently - indeed, footage of another fireball was reported earlier this month over Illinois in the United States.

In other words, it is not that unusual to have two bright fireballs in the space of a couple of days over a country as vast as Australia.

These bright fireballs can be an incredible boon to our understanding of the formation and evolution of the Solar system. When an object is large enough, it is possible for fragments (or the whole thing) to penetrate the atmosphere intact, delivering a new meteorite to our planet’s surface.

Meteorites are incredibly valuable to scientists. They are celestial time capsules – relatively pristine fragments of asteroids and comets that formed when the Solar system was young.

Most meteorites we find have lain on Earth for long periods of time before their discovery. These are termed “finds” and while still valuable, are often degraded and weathered, chemically altered by our planet’s wet, warm environment.

By contrast, “falls” (meteorites whose fall has been observed and that are recovered within hours or days of the event) are far more precious. When we study their composition, we can be confident we are studying something ancient and pristine, rather than worrying that we’re seeing the effect of Earth’s influence.

For this reason, the Australian Desert Fireball Network has set up an enormous network of cameras across our vast continent. These cameras are designed to scour the skies, all night, every night, watching for fireballs like those seen earlier this week.

If we can observe such a fireball from multiple directions, we can triangulate its path, calculate its motion through the atmosphere, and work out whether it is likely to have dropped a meteorite. Using that data, we can even work out where to look.

A successful meteorite search by the Australian Desert Fireball Network.

In addition to these cameras, the project can make use of any data provided by people who saw the event. For that reason, the Fireballs team developed a free app, Fireballs in the Sky.

Read more: How we solved the mystery of Libyan desert glass

It contains great information about fireballs and meteor showers, and has links to experiments tied into the national curriculum. More importantly, it also allows its users to submit their own fireball reports.

As for this week’s fireball over southern Australia, NASA says it was probably caused by an object the size of a small car. As for finding any remains, they are now likely lost in the waters of the Great Australian Bight. 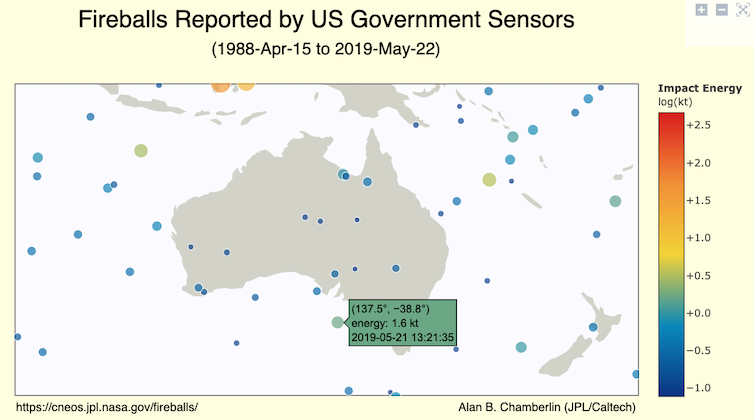 NASA’s record on the location marked in the Great Australian Bight of one of the fireballs over Australia this week. NASA