Classical music has traditionally not been a welcoming environment for women composers. Opera Australia’s 2019 season, for instance, features just one work by a female composer, Elena Kats-Chernin.

At a recent New Opera Workshop, held in Brisbane in April, numerous prominent composers and artists (both female and male) put forward a united call for action from the opera sector. “We want to decolonise the distribution of power so that the stories … of women and all people with diverse voices resonate equally with that of men”, they said in part.

Despite the exclusion of their creative work from mainstream opera companies, Australian women are creating spaces for themselves: writing music that tackles issues such as colonisation and misogyny and breathing new life into vocal styles.

Andrée Greenwell is an Australian composer exploring the expressive possibilities of voice to tell female centred stories. In her most recent work, Listen to Me, created for radio and podcast, women speak about gendered violence.

In this collection of songs, words and music, words take precedence, without sacrificing the aching beauty of the richly melodic writing. The recording and mixing of Listen To Me gives the clarity and feeling of intimate speech – in contrast to traditional classical singing, which prioritises beauty of tone over intelligibility of the word.

Among the words featured are those of Clementine Ford and Candy Royalle, two public figures who have stood up for women and been subject to sustained sexist abuse as a result. Candy Royalle writes about struggling to be heard in the media space: “We wrap our tongues around our ancestors stories which intermingle with our own new lives and cannot be silenced, no matter how hard, how sustained the attack on our voices.”

Another, Australian poet and cultural commentator Alison Croggon has powerfully described the under-representation of female voices in the performing arts in general. It means, she says, that “the same stories, the same viewpoints, the same assumptions, the same tropes, continue to dominate our representations of humanity, sexuality, relationships and power. And these representations reinforce the behaviours that in turn force women out of these industries. It’s the definition of a vicious circle”.

Greenwell’s vocal writing is also exploring new territory, with a contemporary classical style that is influenced by renaissance and folk song. It has something in common with minimalist composers like David Lang and American composers and singers Caroline Shaw of Roomful of Teeth and Shara Nova of My Brightest Diamond.

For Indigenous Australians, classical music has never been an arena to tell their own stories. However, Yorta Yorta composer and soprano Deborah Cheetham is committed to using classical forms such as opera, oratorio and song as vehicles for Indigenous stories and performers.

Pecan Summer, an opera based on the story of the 1939 Cummeragunga Mission walk off, was written by Cheetham. After auditioning Indigenous opera singers across Australia for two years, she has established a training and support program for them.

Cheetham uses centuries old European classical music forms to tell Indigenous stories that are thousands of years old. She is writing works in the world’s oldest living languages and giving voice to stories that have been suppressed or little known.

She is also writing in a form that have been notorious for excluding and suppressing the work of women composers – depicting female characters as mad, dangerous, cunning, virtuous, stupid and rarely the authors of their own destiny. As Susan McClary has written: “Operas … offer up the female as spectacle … while guaranteeing she doesn’t step out of line.”

Cheetham has followed Pecan Summer with a Requiem inspired by one of the most brutal resistance wars fought in Australia, The Eumeralla Wars between European squatters and Gunditjmara people in south west Victoria. Eumeralla, A War Requiem for Peace is sung entirely in the language of the Gunditjmara. It will have its Melbourne Premiere next month with the Melbourne Symphony Orchestra.

Cheetham says of this requiem for her people:

Cheetham is adapting traditional musical forms such as opera, oratorio and art song, while placing women at the centre of the stories. She is reinventing old musical forms with rich, soaring melodies that touch the heart and inhabit the body.

There are many other women reshaping classical music. Sound artist Jo Truman, a composer/performer who is one of Australia’s leading experimental artists working and composing for voice says: “I felt empowered and embodied by singing … I wasn’t singing songs; my body was a physical score and I could draw feelings and landscape out of it.”

While Greenwell and Cheetham explore the power of words and narrative, in her work Speechless, composer Cat Hope uses the visceral quality of sound and wordless voice to explore the lack of action on the 2014 Australian Human rights Commission report “The Forgotten Children: National Inquiry into Children in Immigration Detention”. 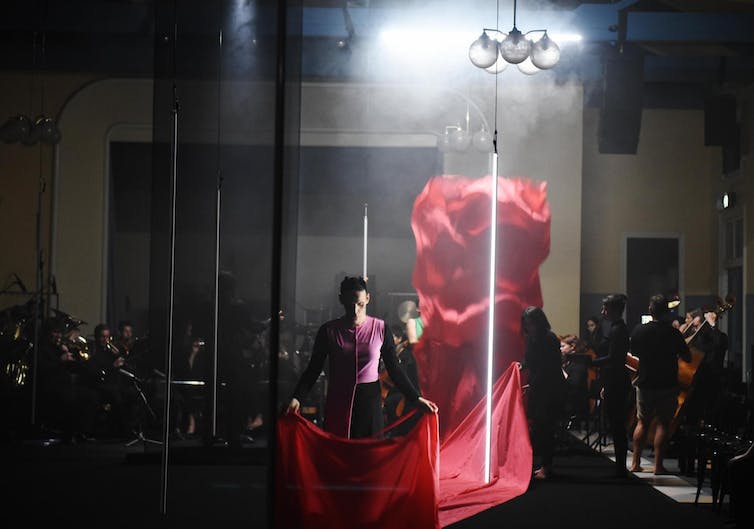 A scene from Speechless. Toni Wilkinson

John Potter, an early music and contemporary music specialist and member of the Hilliard Ensemble among others, has argued that classical singing has become standardised and moribund. Its future, he argues, lies in finding room for a wider range of voices, and of vocal styles.

These Australian women composers are doing just that – and asking urgent questions about our nation in the process.

Eumeralla, a War Requiem for Peace will be performed on Saturday June 15 2019 at Melbourne’s Hamer Hall.