This year’s Eurovision Song Contest was perhaps the most controversial in its more than half a century history. Held in Tel Aviv, calls for boycotts rang out on social media and elsewhere because of Israel’s treatment of Palestinians. Iceland’s Hatari (more on them later) were one of the few entrants to openly show support for Palestine, but otherwise there was lots of talk about the power of music to bring people together.

Messages of unity have been fairly standard for most of Eurovision’s history, given its creation in the 1950s was intended to bring a war-torn Europe back together after World War II.

The contest has long been known as a yearly spectacle of quirky Euro-kitsch, complete with corny choreography, garish costumes and bizarre performance styles. What has been interesting to watch over the past few years is how muted these once defining elements have become. 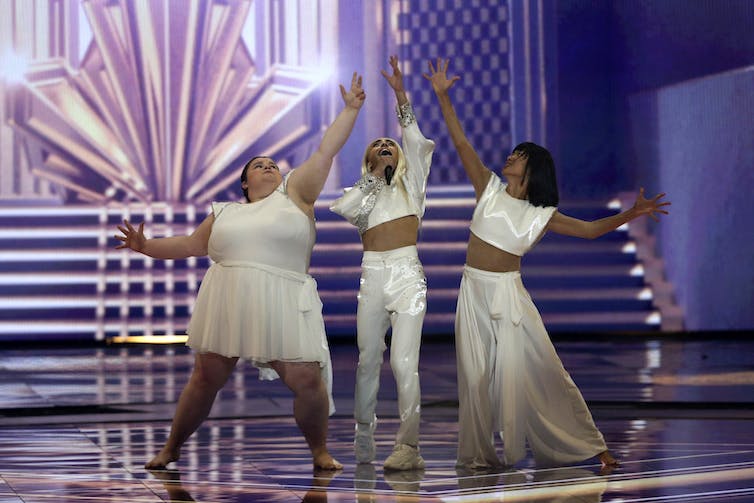 This year, the contest resembles more mainstream singing talent shows like The Voice or American Idol, with slick production values and an increasingly narrow range of musical styles and genres. For the past few years, this narrowness has been a common complaint on social media. This year’s winner from the Netherlands, Duncan Laurence, for instance, was a contestant on Holland’s version of The Voice. 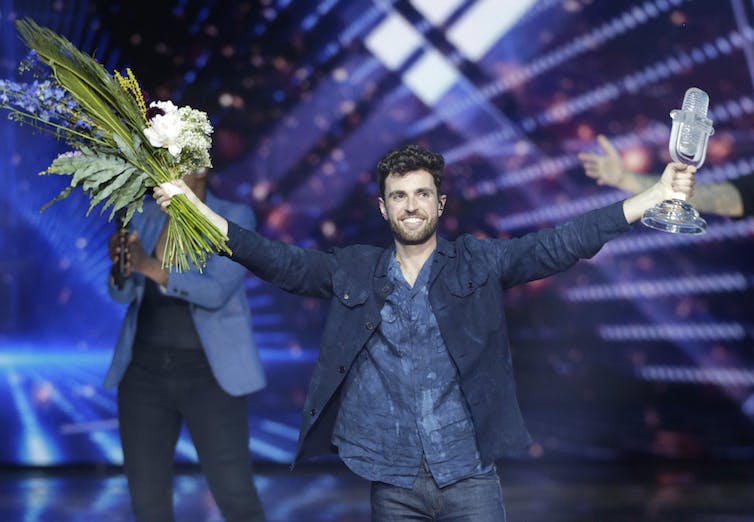 Winner of the 2019 Eurovision, Duncan Laurence of The Netherlands. Abir Sultan/EPA

This seems to have coincided with a shift in the way in which fans watch the show. British and Australian audiences in particular have tended to view Eurovision through an ironic lens, taking a kind of knowing pleasure in the overly earnest, campy, or just plain weird acts that appear on stage. This is why Graham Norton supplies the sarcastic commentary in the UK and Joel Creasey and Myf Warhurst do the same in Australia.

Read more: How camp was the Met Gala? Not very

Ironic fans are everywhere online, and are not just confined to sarcastic comments about Eurovision on Twitter. Fans of other kitsch, camp, or “bad” art produce videos, memes, blogs, Facebook groups, and so forth. Irony is generally defined as saying what is contrary to what is meant. The ironic fan often recognises that there is something woefully deficient or inept within a favoured text (or even politically incorrect or outrageous), but it is usually that very aspect from which the fan derives pleasure.

The last ten years or so of Eurovision has seen a decline in the amount of “outrageous” acts, so any ironic appreciation of the contest now seems a bit hollow. This may not be something to mourn, certainly those who have celebrated post-irony or the new sincerity as a cultural trend would not miss it. But while the songs and singers of Eurovision get increasingly conventional, the desire for a certain mode of ironic appreciation remains. 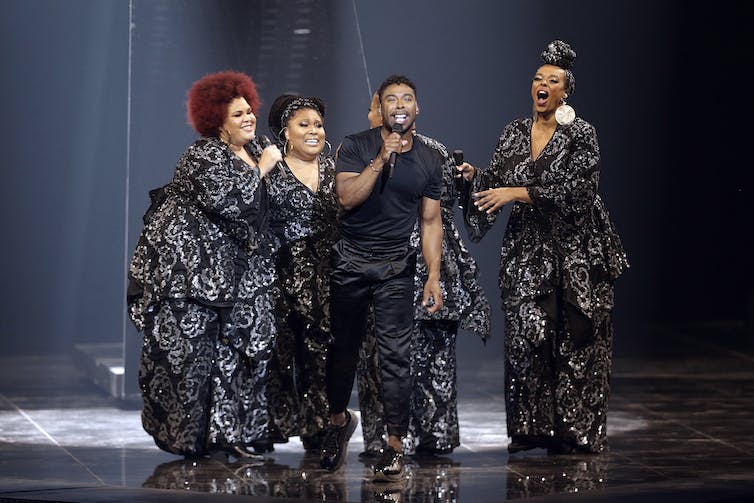 Sweden’s John Lundvik performs Too Late For Love at the final. Abir Sultan/EPA

There are, of course, unconventional exceptions. In 2019, our very own Kate Miller-Heidke gave us a somehow both oddball and meteoric performance of her song Zero Gravity as she swayed to and fro atop a bendy pole. A song about post-natal depression combining pop and operatic styles, performed with quirky stagecraft, its message is too sincere to invite an ironic response. Ultimately, Australia placed 9th with 285 points.

The other unconventional performance of the night was Hatari, a BDSM-themed, heavy metal synth band from Iceland. The band’s name literally means “hater” and their song Hate Will Prevail muses (loudly) on fascism, nihilism and blood-soaked hedonism. As they screamed through their performance, a figure in leather banged a sledgehammer side to side as if they were a human metronome. 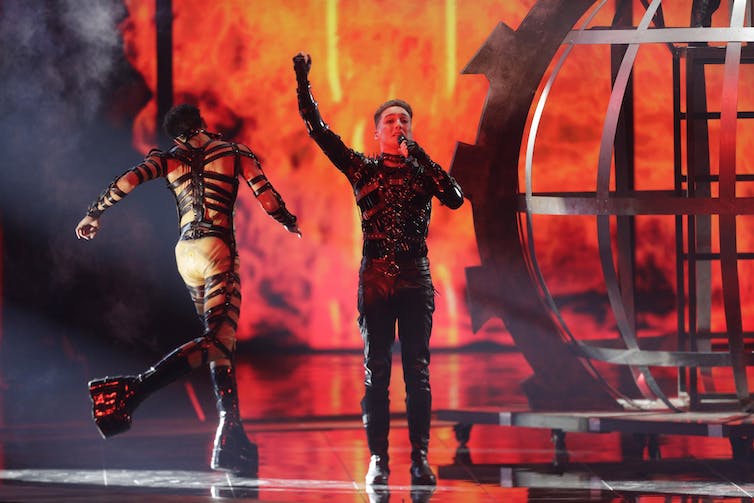 Iceland’s Hatari: a standout in terms of weirdness. Abir Sultan/EPA

All this happened while other performers, in six-inch platform boots, death-dropped all over the stage. In terms of weirdness, Hatari was the standout. While strange and extreme (for Eurovision), this was another song that does not really invite an ironic stance.

Hatari caused commotion off-stage, openly criticising Israel in the press and unfurling scarves bearing the Palestinian flag after their performance when the cameras cut to them in the green room. Among many other controversial comments and stunts, they also challenged Israel’s Prime Minister Benjamin Netanyahu to a traditional Icelandic trouser-grip wrestling match.

Later, Madonna appeared as the votes were counted, and made a similar political statement with one of her dancers bearing the Palestinian flag. While the politics of this have already been much discussed, the presence of a pop icon like Madonna perhaps demonstrates how far Eurovision may have strayed from its “daggy” roots. 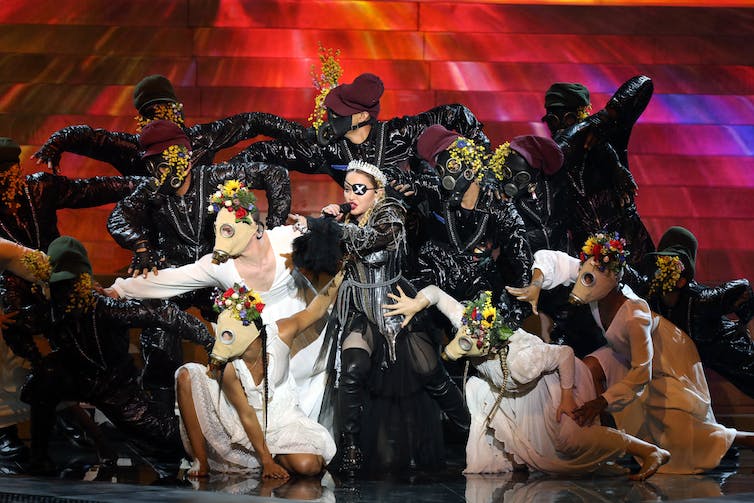 Madonna performs at the final. Her presence demonstrates how far Eurovision may have strayed from its ‘daggy’ roots. Orit Pnini / Israeli Broadcasting Union

As with every year, there were plenty of Eurovision clichés; on the nose song lyrics, showy choreography, innovative stage effects, and more key changes than you could throw a wind machine at.

Other notable highlights this year included Slovenia’s entry, where the performers spent most of the song staring lovingly (or creepily?) into each other’s eyes, seemingly oblivious to the audience. Additionally, Russia’s Sergey Lazarev had an interesting gimmick, an illusion of mirrors and getting rained on as he keened about screaming into the night.

But as the acts become more conventional each year, it becomes more obvious that Eurovision is not the kitsch extravaganza it once was. By no means does this mean it is not still an important event, or a whole lot of fun. A fairly conventional song contest with a few flashes of strangeness and a spirit of human unity is definitely something we can all enjoy.