Australia is one of the most urbanised nations in the world, and our ongoing population growth continues to produce new suburbs on city fringes across the continent. These new suburbs, and the processes that form them, are often contentious.

And that’s not just because of vexed issues of sprawl, transport and infrastructure provision. One of the most common criticisms of new and outer suburbs is that they are bland, soulless, cookie-cutter developments that lack culture and a sense of place.

This problem occurs when these suburbs are built as though on a blank slate, with little thought given to engaging with existing stories of landscape and how new stories might be formed. Place itself is layered through stories, time, material and experiences. This idea of layering provides important clues for new developments.

My research in the Melbourne suburb of Point Cook shows the importance of listening to cues in the existing landscape. This enables the design and governance of new developments to provide opportunities for grassroots placemaking. Communities can then infuse places with new layers of meaning, creating a sense of ownership and stewardship.

As part of Place Week Vic, researchers and practitioners will be discussing the lessons of places like Point Cook for outer suburbs and new developments.

While rapid population growth in Point Cook began in the 21st century, the area has long featured wetlands that are important to migratory birds from around the world. It is also the birthplace of the Royal Australian Air Force RAAF.

Parts of Point Cook’s suburban fabric draw on layers of history and landscape by including wetlands that manage stormwater, provide bird habitat, and promote a distinctive character.

Unlike many suburbs, Point Cook has a main-street-style town centre with shops fronting footpaths. This provides the frame for the type of meeting place so vital yet often lacking in outer suburbs. But it took local intervention to make this place hum.

A park pops up

Over the past two summers, a street block has been closed off to traffic to form a highly popular, grassroots-led pop-up park. The space has been full of colour and activity throughout the day with flexible seating, beanbags, and a loose program of community-led events such as workshops, film screenings, and arts activities. 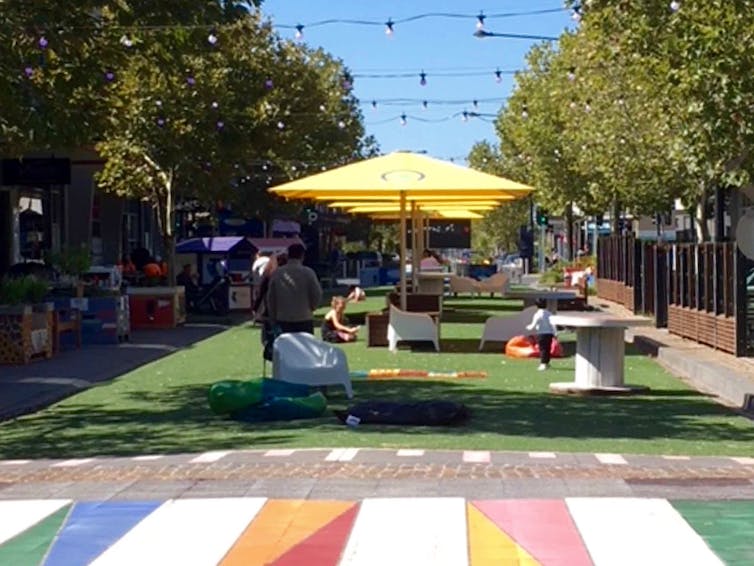 One cannot help but notice the informal interactions and moments the park prompts. Families stop off with full trolleys of shopping to rest and people-watch. Children play in brightly painted cubby houses along the edge of the park. And people of all ages and backgrounds sit and talk.

What made the park tick?

The design approach to the park has involved the community in making a sociable, flexible and colourful space with robust temporary infrastructure.

Children and families move seats and beanbags around the space, while local community groups and volunteer gardeners have taken charge of painting, decorating and caring for planter boxes along the edges of the park. These elements create a welcoming sense of informality, comfort and stewardship.

Importantly, activity from the edges of the park bleeds into the surrounds, and vice versa. Restaurant seating along the footpaths that front the park is generally well used, and people value the place as a break from the rhythms and routines that define suburban life.

The park can be a place to relax, or somewhere more intense. During the Indian Holi festival, dance, dress and dye dominated as an evocative ritual was publicly shared, with the implicit invitation for all to get involved.

These interactions of people, identities and place coalesce into a stronger local sense of shared identity.

Park co-founder Sara Mitchell, a Point Cook resident for the best part of a decade, describes the design approach as providing a frame for the community to “colour in”. This metaphor describes the importance of leaving openings within formal design elements. This allows residents to make and interpret place in ways that form new individual and collective bonds.

Point Cook’s pop-up park demonstrates the power of placemaking that considers the layered nature of place, highlights local assets and fosters the ability of place to bring people together.

These types of activities are more likely to prosper when new suburbs are designed and governed to provide inviting openings in their fabric for residents to interpret and create place in ways that transcend routines of work and consumption.

We should never understate the importance of continually infusing places with joy, character and quirk. This is important in creating generous, meaningful places with heart and soul.