13 Reasons Why, the controversial Netflix programme that broaches the topic of adolescent suicide, has drawn further criticism after new research showed a potential link to a rise in suicide rates coinciding with the show’s release.

This leaves parents confused about whether they should allow their children to watch the show, discourage it, or even ban viewing.

While some parents might feel uncomfortable discussing the issues raised by the show, it should be seen as an impetus to talk to young people. It also provides a framework in which to have these difficult conversations.

Read more: Why we shouldn't ignore what 13 Reasons Why is trying to tell us

The study in question, published in the Journal of the American Academy of Child and Adolescent Psychiatry, assessed the association between suicide rates over a five year period (a total of 108,655 suicides) and the Netflix show 13 Reasons Why.

It showed a significant increase in suicides among those aged 10-17 years in the three months following the programme’s Netflix launch. April 2017 – the first month the show was available to stream online – saw a suicide rate of 0.57 per 100,000. This was the highest rate across the five years of the study and a step increase of 28.9% on the average monthly rate.

This adds to prior research that showed increased rates of suicide attempts in the period after the show became available.

And for every death that does occur, around 20 people attempt suicide.

The popular Netflix series sees high school student Clay Jensen given a collection of 13 audio tapes in which his close friend Hannah Baker explains why she ended her life.

In each episode, we get an insight into the difficulties Hannah faced leading up to her suicide. These include social conflicts, problematic romantic relationships, seeking independence, and the added complexities of social media, bullying and mental health issues that affect young people today.

There is a phenomena called “suicide contagion”, where it is believed exposure to suicide in the media and popular culture may lead to copycat behaviour. These concerns have been present for several decades, but are amplified by the volume of content available in today’s digital age.

Suicide contagion is well documented in the literature and it is a real threat. But a greater risk is that young people who are thinking of suicide don’t talk about their thoughts with trusted family and friends. 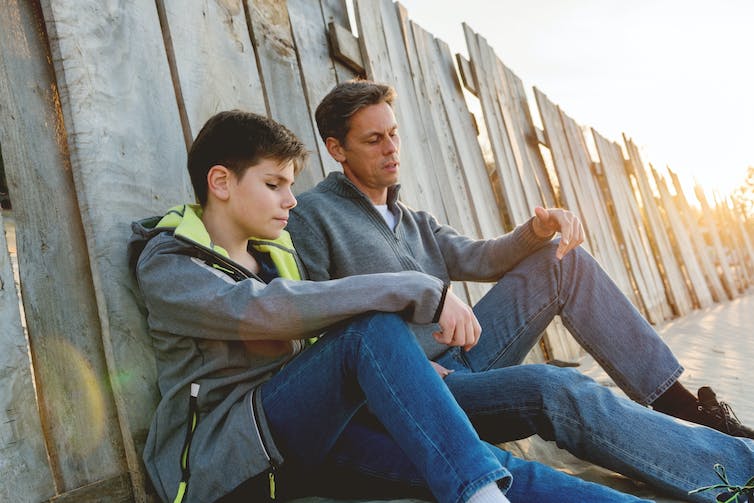 If your children have watched 13 Reasons Why, it’s worth talking to them about it. From shutterstock.com

Some researchers who have studied responses to 13 Reasons Why suggest there can be both harmful and helpful effects of watching the show.

While some children watching 13 Reasons Why can be “triggered” by material suggestive of acts of self-harm, others have shown an increased compassion and willingness to help others who may be going through difficult times.

Talking about it can reduce the stigma

There are around 3,000 suicides in Australia every year, and this number is growing.

Around the world that figure is about 800,000 suicides annually, equating to one person every 40 seconds. Suicide is the second leading cause of death among 15- to 29-year-olds.

People experiencing thoughts of suicide will often be frightened to talk about it because they are concerned about the reactions of others and potential consequences in terms of their job security or social standing.

Being afraid to talk about suicidal thoughts is not only a problem with teenagers. It’s also often seen in high pressure jobs such as the medical profession, the police and armed forces.

There are consistent calls across mental health networks to reduce the stigma associated with thoughts of suicide and self-harm, with an emphasis on encouraging openness and discussion.

As Beyond Blue notes, it’s time to bring the issue of suicide out into the open and stop hiding it as if it is a crime. Using pejorative language like “committed suicide” implies it’s an offence.

Read more: How to ask someone you're worried about if they're thinking of suicide

The series 13 Reasons Why bravely tackles this social taboo head-on. Importantly, the creators have provided helpful guides on how to watch the show, as well as plenty of resources on how to seek help.

It’s imperative we provide opportunities for discussion with young people about these powerful feelings of depression and self harm. There are many resources available to parents to help them start the conversation.

If this article has raised issues for you or you’re concerned about someone you know, call Lifeline on 13 11 14.