I Need to Know is an ongoing series for teens in search of reliable, confidential advice about life’s tricky questions. If you’re a teen, send us your questions about sex, drugs, health and relationships and we’ll ask an expert to answer it for you.

As someone who has never touched drugs before, how hard is it really to say no to illicit substances?

Hi and thanks for the question. Can young people really “just say no” to illicit drugs? There are a few things to consider, so let’s talk them through.

1. Are all teenagers trying drugs?

It might feel as though your friends are going to go through a phase of experimenting with illicit drugs. But in fact, most young people don’t take illicit drugs.

Alcohol is by far the most commonly used drug, though rates of alcohol use are generally decreasing. A national survey of secondary students found 46% of 12-17 year olds had tried alcohol in the past year, but only 25% had in the past month. Similarly, another survey found young people were trying alcohol for the first time later (about age 16) and more were abstaining than ever before (82%).

Cannabis is often the first illicit drug young people are exposed to (about 7% of 12-17 year-olds have tried it). Later on, generally in your early 20s, you’ll start to encounter people trying harder drugs such as ecstasy and amphetamines (see in the graph above how this number dramatically increases between the two age groups). Even then, the majority of people don’t regularly use these drugs.

2. Will people actually offer me drugs?

There is a widespread assumption that drugs are frequently offered to people your age. This isn’t always the case. Drug use is an illegal activity, so people who have them and who sell them tend to be a little cautious who they talk to about it. You might not ever be offered them directly.

But if most of your peer group are experimenting with substances, you almost certainly will be offered them. So…

Although most young people don’t use drugs, some studies point out they’re open to other people doing so. This is referred to as the “normalisation” of illicit substance use: in simple terms, it’s being OK with your friends drinking alcohol or doing drugs even if you choose not to.

If you don’t want to drink or take drugs, you’ll find yourself in a position where you have to explain why. It might be useful to say something like:

It’s not my thing, but I don’t care if you’re into it.

Or if you feel like you need to give a reason, perhaps,

I always react badly when I drink alcohol/smoke joints, so I just don’t like it.

I have a game tomorrow and don’t want to feel bad.

I have bad come downs, so the high’s just not worth it for me.

I have a family thing tomorrow and don’t want to be hungover / coming down.

Hot tip: try not to make the other people feel like you you are judging them, but don’t feel like you need to justify why you don’t want to use drugs either. 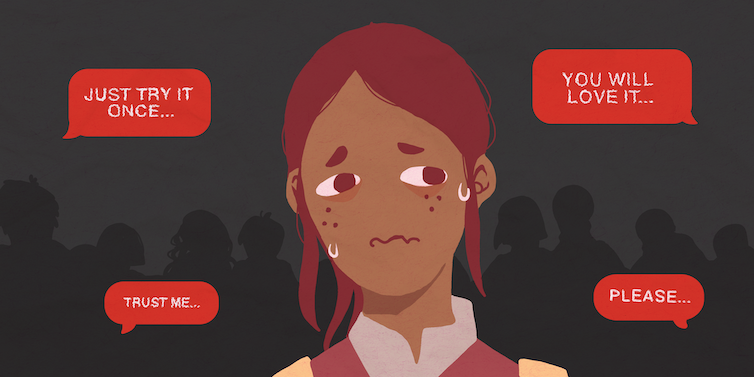 Nina Maile Gordon/The Conversation, CC BY-NC-ND 4. Can you be the only one in the group who doesn’t use them? When you do something you don’t want to do, you won’t feel good about it or about yourself. So you might have your friends, but you might not be happy – that’s not a great trade-off! Make a point of being around people and friends who make you feel good. You might not enjoy hanging out with people when they’re affected by drugs, so don’t! Spend time with people who don’t pressure you to do things, and perhaps skip the parties, meet-ups and hangouts where you think there’s a good chance you won’t have fun. If your friends are using drugs a lot and it’s impacting their lives in other ways, you might want to help them get some help – here are some tips on how to do that. Read more: I Need to Know: 'My friend is using ice and smoking pot. What do I do?' If you’re the only person in your group not using drugs, you might want to find some other like-minded friends – perhaps through school, a part-time job or sport. If you’re a teenager and have a question you’d like answered by an expert, you can: email us at intk@theconversation.edu.au submit your question anonymously through Incogneato, or DM us on Instagram. Please tell us your name (you can use a fake name if you don’t want to be identified), age and which city you live in. Send as many questions as you like! We won’t be able to answer every question, but we will do our best.