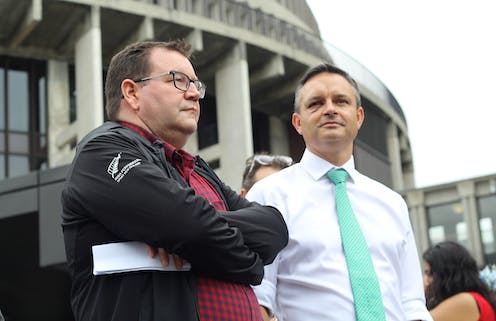 The major focus on climate change in Environment Aotearoa 2019, a stocktake on New Zealand’s environment released today, is a welcome change.

The report describes an environment that faces serious pressures, including species at risk of extinction, polluted rivers and streams, the loss of productive land as cities expand, and climate change.

On climate change, the report is more detailed and hard-hitting than past reports have been.

In the latest figures from 2017, gross emissions rose 2.2% from 2016 and remain 23% above 1990 levels. The immediate causes are clearly stated: high emissions of methane and nitrous oxide from agriculture and sharply rising emissions of carbon dioxide from transport.

The report is silent on the root causes of rising emissions, including ineffective government action and community attitudes that rank climate change as a relatively low priority. Instead it states:

Our high per-person emissions are reversible if we adopt policies, technologies, or other means that reduce our production of greenhouse gases.

But this obscures the story of 30 years of policy work on climate change and 11 years trying to make New Zealand’s Emissions Trading Scheme work.

Read more: Why NZ's emissions trading scheme should have an auction reserve price

An earlier report on climate change did not foresee the flood of vehicles entering the country. This has now given New Zealand the highest rate of vehicle ownership in the OECD. New Zealand has 4.36 million vehicles, up half a million since 2015, but lacks the regulations found in many other countries, such as CO₂-linked registration fees and fuel efficiency standards. With a flood of cheap, high-emission used imports, it is no surprise that New Zealand’s transport emissions continue to rise.

A key function of this latest report is to identify knowledge gaps. An important one for New Zealand is the relative strengths of different carbon sources and sinks, for example by different types of vegetation, soils and agricultural practices.

As emphasised recently by the Parliamentary Commissioner for the Environment, New Zealand is still focusing too much on plantation forestry as a short-term fix for our emissions problem. It is a risk because it creates a carbon liability for the future, as well as exposure to diseases and fires. Its true environmental impact is not well understood.

The section on current climate impacts could not be more clear.

Warm days have increased and frosts decreased. Soils have dried, glaciers have melted, sea levels have been rising, the oceans have warmed and acidified, and sunshine hours have increased. No surprises so far. Climate science predicts an increase in extreme rainfall events, but this has not yet been detected statistically. At one-third of the measured sites, extreme wind has decreased, whereas an overall increase in wind is expected.

If anything, the section on current impacts is too conservative. The data stops in 2016 before the epic years of 2017 and 2018, which saw many extreme weather events of all types. These were linked in part to El Niño, which raises global temperatures, and in part to an extreme Southern Annular Mode, an indicator whose strengthening is itself linked to climate change.

Few New Zealanders will forget the sequence of ex-tropical cyclones, 1-in-100-year floods, the sight of the Southern Alps without snow or the Port Hills on fire.

The report’s final section covers future impacts in the most forceful official statement seen yet. It lays out a blizzard of impacts in all areas of the environment, country, economy and infrastructure, including coastal flooding, erosion, tsunami risk, liquefaction risk and saltwater intrusion.

All aspects of life in New Zealand will be impacted.

The uncertainties are clear. We don’t have a clear idea of the rate of future emissions, or the impacts under different emission scenarios. Some of the most important impacts, such as sea-level rise, are also the most uncertain. The report notes that information on cumulative and cascading impacts is limited. Climate change has the capacity to undermine environmental efforts elsewhere.

Polls show a rising awareness of climate change and a hunger for stronger action. The Zero Carbon bill is expected to go to select committee before June, but even when passed, emissions will not start falling until the mid-2020s, with the heavy lifting left to the 2040s and future emission reductions technologies.

A recent report on New Zealand’s transition to a low-emission economy outlines many more immediate actions. Let’s hope that this report, along with the public pressure from the School Strike 4 Climate and Extinction Rebellion movements, give the government the courage to act decisively.