The public housing estates built in cities around the world since the first public housing was built in the 19th-century London have long been home to the very vulnerable, including refugees and immigrants. At the level of their lived experience – home and neighbourhood – the architectural and spatial qualities of public spaces and housing affect refugees’ and migrants’ ability to integrate into their new home. We can see this in the public housing estates of two cities on opposite sides of the world, Paris and London.

In their new communities, refugees are also trying to adapt to new cultural norms, language, access to employment and education and even to stigma and blame for their need of public housing.

The HLM of Paris

The French government has been discussing issues related to public housing or habitation à loyer modéré (or HLM, which means “rent-controlled housing”). In 2018, the government and its Ministry of Territorial Cohesion suggested a plan to generate funds to build and renovate this housing. 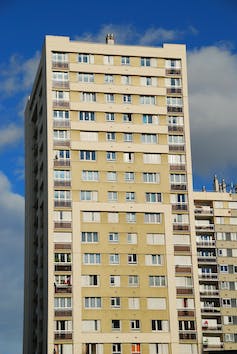 Over 20% of immigrants live in the HLM of Paris and the Seine Saint-Denis department. Arab and Sub-Saharan African immigrants experience high levels of ethnic segregation, reaching 30% by the late 1990s. African immigrants and refugees tend to live in clusters in segregated and more disadvantaged neighbourhoods away from the city.

The public still has a negative view of the public housing estates, located in many banlieues, as declining and segregated “immigrant-dominated slums”.

Saint-Denis is a working-class neighbourhood in the northern suburbs of Paris. Despite the positive impact of its shops, bazaars, diverse communities and residents’ recent initiatives to boost tourism, it is still struggling with social inequality as one of the most impoverished areas in Paris.

Violence and drug trafficking are two key issues that impact people and their HLM housing. In 2016, an increase in violent crime led the HLM Office, which manages 18,000 social housing estates in Seine-Saint-Denis, to hold the government responsible due to a sharp increase in insecurity. 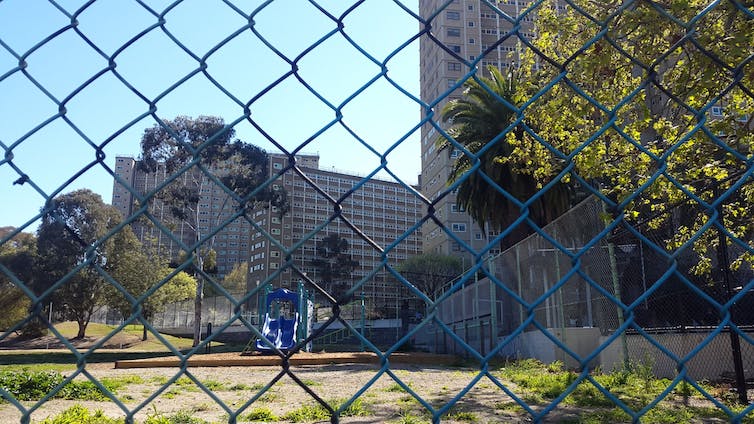 Many similar issues, and some different ones, affect public housing provision and tenancy in Melbourne. It’s where many refugee arrivals are first housed in Australia. As in Paris, Melbourne’s public housing is associated (fairly or unfairly) with crime, social isolation and urban blight.

A more pressing problem in Melbourne, however, is the gap between housing supply and demand. Public housing stock across Australia is declining and ageing while waiting lists grow.

The list is growing by 500 people a month in Victoria. In this state alone, nearly 25,000 children are waiting for social housing.

Read more: Governments have no excuse for keeping public in the dark on public housing deals

Amid increasing concerns about the affordability and availability of public housing, the sociology, design/architecture and aesthetics of existing estates become even more vital in terms of their effects on social cohesion and well-being. These impacts are critical for those whose first home in Melbourne is a public housing estate.

The disrepair and poor quality of buildings and grounds of many of Melbourne’s older, inner-city estates are obvious. Building materials (like concrete) are degraded. The design of common areas, like foyers and hallways, does not promote social interaction.

The grounds also fall short of what’s needed, despite the opportunities they offer for varied outdoor activity and social encounters. Public housing estates are often gated, either physically or psychologically, from the surrounding community. This results in enclaves of social disadvantage, often within otherwise wealthy suburbs.

Many have questioned whether public housing renewal is improving these conditions. The public-private mix in some new estates has resulted in gated gardens being provided for the exclusive use of the private residents of apartment buildings and not the public tenants. 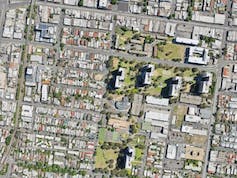 The monumental scale of Melbourne’s largest estates is intimidating for visitors. Finding one’s way to a particular address can be challenging. All buildings take the same form and, lacking individual identity, are recognisable by numbers only.

The scale of the buildings and the dull colours and textures of their facades coupled with the repetitive, gridded network of windows are reminiscent of a Soviet era that never existed in Melbourne. One can see similar layouts, colours and materials on the facades of the HLM of Saint Denis. This speaks to the ubiquity of public housing design. 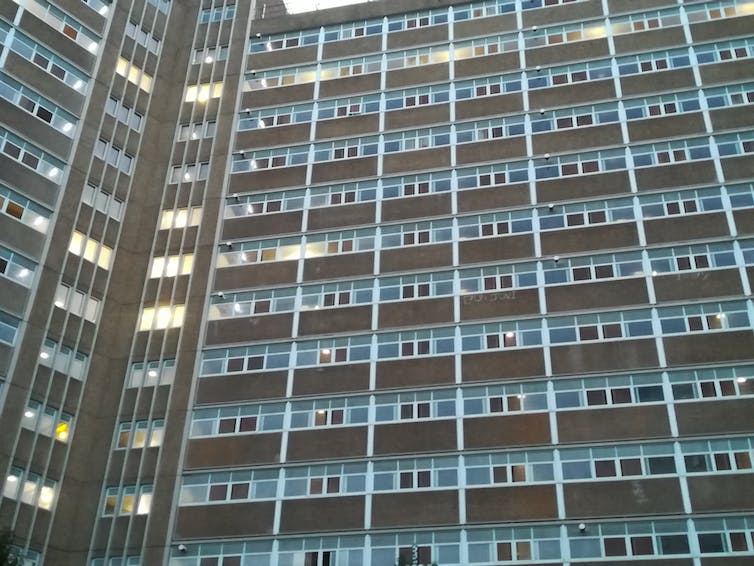 The intimidating scale and uniformity of public housing can be a problem in Melbourne – this estate is in Carlton – or Paris. Sandra Carrasco, Author provided

How can public housing be made better?

Public housing estates often have a pronounced cultural and social mix, with first-generation migrants and refugees from across the globe living as neighbours. This can have benefits including cultural exchange and mutual understanding but can also trigger social withdrawal and isolation. The risks are particularly high for people from new cultural groups arriving in neighbourhoods with settled (and culturally different) populations.

Cultural differences certainly affect relationships between individuals, but also apply to the ways people use the private and public spaces of their new homes. What an Australian-born, wealthy white person would expect and need of “open space” is potentially quite different to what a black, Sudanese-born survivor of conflict might expect or need. 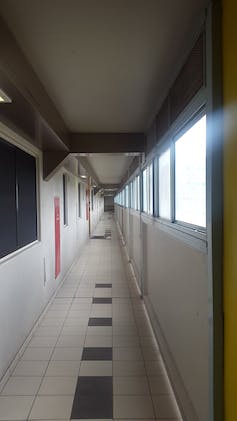 Arguably, what is being offered as places for people to connect with their new community in and around public housing meets few people’s needs or expectations. The interior spaces, such as long interior corridors with blank walls, do not provide for comfort, communication and interaction between tenants. The exterior spaces delineate rather than join up the communities of public and private housing.

These dimensions of Melbourne’s public housing may set up a spatial tension that mirrors the occupants’ lives. Yet they could also offer an opportunity to be a canvas for a new interpretation of architecture and urban development, as German sociologist Martina Low notes in her book, The Sociology of Space: Materiality, Social Structures, and Action.

Low’s principle focuses on the emergence of space as a result of interplay between social structure, the material world of objects and bodies, and the symbolism of the social world. This new interpretation needs to reflect the lives and experiences of refugee migrants making a new home as well as more established members of the community.