Creating something original – let alone poignant – within the genre of romantic comedy is no easy feat. But with Top End Wedding, Wayne Blair (The Sapphires) has managed to achieve a unique Australian story with a genuine, emotional payoff for its audience.

Directed by Blair (The Sapphires) and co-written by Joshua Tyler (writer and star of Plonk) and Miranda Tapsell (Love Child, The Sapphires), the film had its Australian premiere at the recent Adelaide Film Festival with much fanfare.

Top End Wedding has all the hallmarks of an accessible romantic comedy. Soon-to-be-married couple Lauren (Tapsell) and Ned (Gwilym Lee) arrive in Darwin for the wedding only to discover that Lauren’s mother, Daffy (Ursula Yovich) has disappeared in the remote far north of Australia.

Lauren must save her parents’ marriage before she can begin her own. Can Lauren and Ned find Daffy and have their dream wedding? Catch is – there is always a catch in the romantic comedy – she only has ten days leave from her highly successful legal job, giving her limited time to find her mother and get married.

Top End Wedding follows in the footsteps of Blair’s 2012 film The Sapphires by telling an Indigenous Australian story that has international crossover potential.

Australian screen studies scholar Therese Davis argues that The Sapphires – based on the true story of an Indigenous Australian singing group who performed for troops in Vietnam – incorporates an international perspective by drawing upon soul music and American politics, while engaging with specifically Australian content at the same. The film is speaking simultaneously to local and global audiences.

No moment in The Sapphires better demonstrates this than the titular group’s performance of their song Ngarra Burra Ferra, with the lyrics playing over Martin Luther King Jr’s historic speech in the background.

Top End Wedding similarly draws on internationally recognisable conventions of popular genres, by adhering to many of the narrative and visual patterns of the romantic comedy and the road movie.

Many of the film’s plot developments will be familiar to romantic comedy fans: Lauren receives assistance from her domineering boss Hampton (Kerry Fox) who develops into a sympathetic character; Ned quits his job and is too afraid to tell Lauren; both have quirky supporting family and friends that provide comic relief and emotional support. There is even a bit of slapstick wrestling at the airport.

When the central couple begin their search, the staples of the road movie come into play: clues are discovered, they run into car trouble, tensions arise and they run into more oddball characters, including a fake, French helicopter pilot. 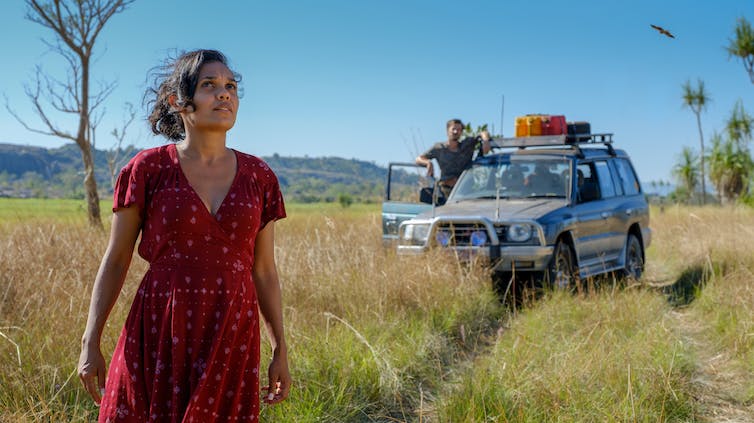 The poignant final act of the film, however, rises above genre conventions, with shining performances by Tapsell and Yovich in particular.

In an Adelaide Q&A, screenwriter Joshua Tyler spoke of the profound impact that consultation with Indigenous elders had on the script writing process. The representation of the Tiwi Islands in the final act demonstrates the importance of genuine consultation and engagement with community groups.

In particular, I was delighted to see the representation of Sistagirls and other queer Aboriginal Australians in the community.

The representation of Indigenous languages and the images of the land throughout the film provide it with a sincere sense of place. Travelling shots across the country are represented through an Aboriginal and Torres Strait Islander map of Indigenous Australia. We see gorgeous shots of the Australian landscape, including the Tiwi Islands and Katherine Gorge.

It’s no surprise that the film has received support from Tourism NT. This localisation is also heard through the brilliant soundtrack, including tracks from Indigenous artists like Electric Fields and Naberlek (whose cover of Land Down Under features).

Some viewers might find earlier parts of the Top End Wedding derivative (a charge that could easily be made against other iconic Australian films such as The Adventures of Priscilla, Queen of the Desert). But this, I feel, is entirely the point: familiar tropes from popular genres have been used to reveal a romantic side of Australia that some may have never seen.

Top End Wedding is released in cinemas on May 2.