Although Rosslynd Piggott has a high profile in the contemporary Australian art scene, her work is difficult to characterise; meaning in her installations, objects and paintings is elusive and interpretations are ambiguous. Her art is not easily given to verbalisation; it is something that is perceived visually and felt intuitively.

Jane Devery, the curator of this exhibition and the author of the excellent catalogue essay notes that Piggott’s works “have courted the elusive and the ethereal.” From the outset, Piggott’s art has flirted with surrealism and symbolism, she explores a dream-like state, where the process is open-ended – part of a continuum – and the notion of the uncanny is a constant companion. 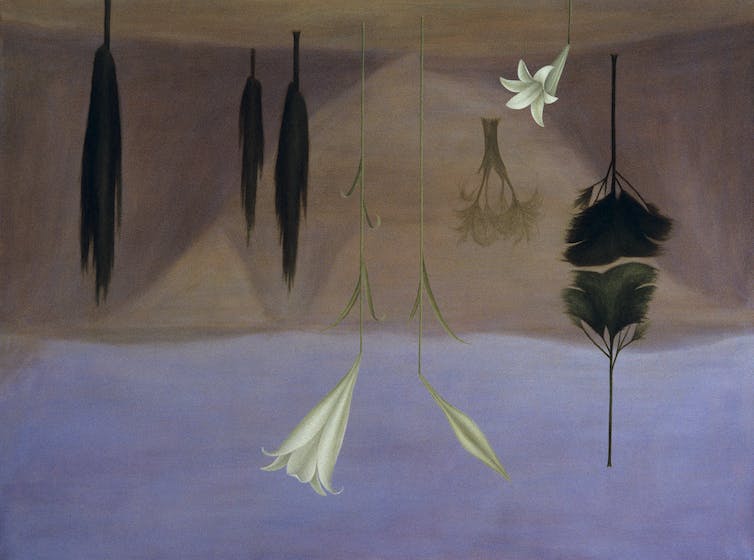 Yukio Mishima, one of Piggott’s favourite authors, in his novel Spring Snow (1969), touches on a quality inherent in Piggott’s art. Mishima writes,

Dreams, memories, the sacred – they are all alike in that they are beyond our grasp. Once we are even marginally separated from what we can touch, the object is sanctified; it acquires the beauty of the unattainable, the quality of the miraculous. Everything, really, has this quality of sacredness, but we can desecrate it at a touch. How strange man is! His touch defiles and yet he contains the source of miracles. 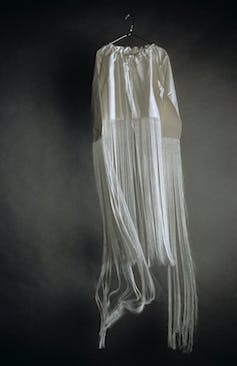 Many of Piggott’s pieces could be aptly described as containing “the source of miracles” – where something is sensed, rather than clearly perceived or articulated. We enter into an ethereal zone, where there are no secure touchstones; mirrors and reflections are part of the process and we frequently see the world through a glass darkly.

Piggott observes: “I have long been drawn to an unclear mirror, as an object and an idea, held in fascination with ancient mirrors, darkened by the oxygenation of time”.

Nevertheless, Piggott’s objects, installations and paintings are memorable, even if memorable in an enigmatic way. Her High bed 1998, in the National Gallery of Australia collection in Canberra, is simple, alluring and seductive, but the elements presented for our contemplation lack a rational reading. 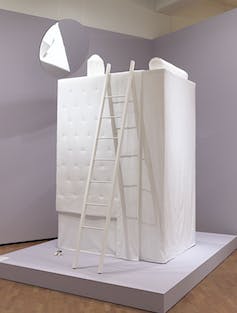 There is a luxurious but oversized bed, which can only be reached by a ladder; at the foot of the ladder are a pair of gorgeous satin adult party shoes, but much too tiny to fit even the smallest and most dainty adult foot. Perched on top of the bed, where the sleeper should be, is a small model of a house.

A circular mirror, suspended above, in pedigree stretching back to the mirror in Jan van Eyck’s Arnolfini double portrait, adds to the sense of disorientation and heightened anxiety experienced in this installation.

In the late 1990s, when the High Bed was made, in art circles there was a growing interest in Freud’s notion of the uncanny that explored strangeness in everyday homely objects. Piggott’s bed in white satin taps into this tradition and enhances it. This is a bed on which no one will sleep, but about which many will dream.

When in December 1919, Marcel Duchamp created his Paris Air, he asked a pharmacist to empty an ampoule that originally contained a serum and to seal it again, once it was filled with Paris air. To this he attached a label, “Serum Physiologique” and later described it as, “Ampoule contenant 50 cc d'air de Paris.” This fragile Paris souvenir “readymade” he gave to his friend and patron, Walter Arensberg.

Piggott has been haunted for decades by Duchamp’s artistic intervention for the containment of air and containment of breath. Her Collection of air 2.12.1992 – 28.2.1993, plots her journey through Europe in 1992-93 in the form of an eccentric “air diary”. She captured air in glass test tubes in 65 locations, sealed each with red wax marked with the letter “R”, both a reference to her name and the sound for the word “air” in French. 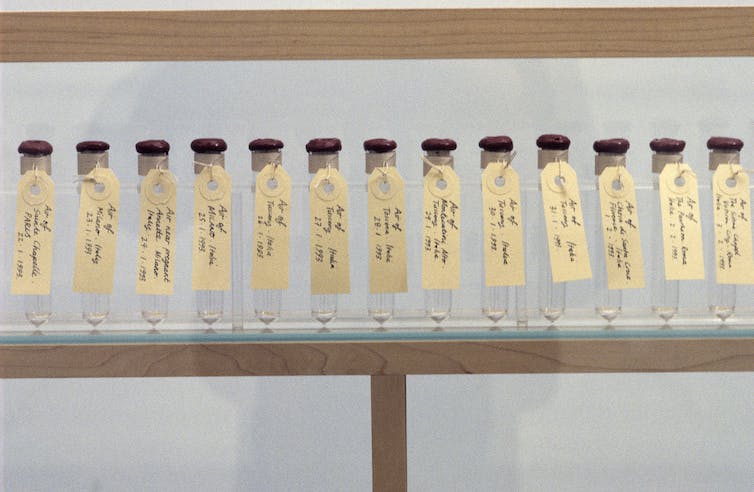 The selection of locations was symbolic and included the generic air of Paris (in homage to Duchamp), air near the Pantheon in Rome and near Piero della Francesca’s Legend of the True Cross in Arezzo. In the installation, the glass vials are lined up as if scientific specimens, each with its identifying tag, for example, reading, “Air of Sainte-Chapelle, Paris, 22 1 1993”. Observing the response of her audience, Piggott has observed, “The labelled information seemed to take them on an extended journey into the tiny and yet expansive space of the invisible”.

The artist has continued through to the present day to contain in glass the air of special locations, especially in Japan, where this invisible, but actual presence as in Air of flower cloud, 2002 or Yamazakura, 2006, could act as a starting point for a thought adventure. Piggott also set out in a number of her pieces, including Suspended breath, 1996, Double breath contained, 1996, and Arranged meeting – breath of two men, 1999, to capture the actual breath of her glass blowers.

Sometimes there is a chance encounter of two glass artists, who are physically divided by continents, but whose breath is united in silent communication within an artwork.

Piggott is not an autobiographic artist, although circumstances of her biography will frequently feed into her art-making as her surroundings seep into her work. She has the rare gift of transforming the local and incidental into something memorable and universal.

It is a pity that significant exhibitions by major contemporary Australian artists, such as Piggott in Melbourne and Janet Laurence in Sydney, remain single venue shows.

Rosslynd Piggott: I sense you but I cannot see you, National Gallery of Victoria Australia, Federation Square, level 3, 12 April – 18 August 2019.