Is water blue or is it just reflecting off the sky? – The students of Ms Brown’s class, Neerim South Public School, Victoria.

This is a wonderful question as it involves many of the puzzles that motivated research into the physics of light in the early 20th century.

The short answer is that the sea is blue because of the way water absorbs light, the way particles in the water scatter light, and also because some of the blue light from the sky is reflected.

But to explain what I mean by that, I have to tell you a bit about light and physics.

Read more: Curious Kids: Why is the sky blue and where does it start?

First, we need to know some fun facts about the nature of light.

The light we see, which we call white light, is made up of incredibly tiny particles called photons. A photon is even smaller than an atom. You can’t see them, but they’re there.

These particles are very strange because when we measure them, sometimes they move like a tiny ball and sometime like a wave – weird, right?

White light is made from photons that have many different wavelengths, some shorter and some longer, and together make up all the colours of the rainbow. The photons with the shortest wavelength we can see look blue, while those with the longest wavelength look red.

White light is made from photons that have many different wavelengths. Wikimedia Commons, CC BY

So let’s think about sunlight. The photons stream from the sun and interact with all matter on Earth. Depending on what the light touches, some of the photons will get absorbed or soaked up. And some will bounce back. When they bounce back, we call this “scattering”.

The photons that get scattered are what gives things their colour. For instance leaves are green, because the green photons bounce back towards our eyes and that is what colour our eyes perceive. Other coloured photons are absorbed by the leaves.

What colour is a glass of water?

Now that we know a bit more about light, we can begin to answer your question.

Experiments have shown that pure water (water with nothing else dissolved in it) absorbs more of the red light than the blue light.

But how much of the red light will get absorbed? Well, that depends on how much water the light has to pass through. 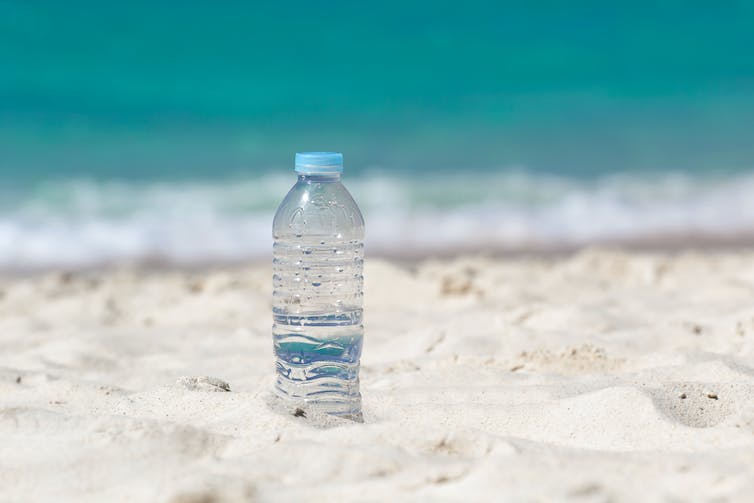 A small bottle or glass of pure water is clear, because it can only absorb a little bit of red light. from www.shutterstock.com

You might be wondering why the water in a glass looks clear. It is because the glass of water is too small to absorb more red light waves. To see the effect with your eye, you would have to look through a glass of water as big as a swimming pool. That amount of water could absorb quite a lot of red light, so the water would look quite blue.

Now imagine a glass that held an entire ocean’s worth of water. It would be enormous! With that much water, you could absorb a LOT of red light. So it would look very blue.

But when it comes to how light interacts with the ocean, there’s more to the story.

Read more: Curious Kids: how is water made?

For starters, sea water is not pure. Sea water has lots of things dissolved in it, like salt and small pieces of dead sea creatures. These particles in the water reflect some of the light before it has time to develop the full blue colour. The light coming back out from the sea is usually more greenish-blue in colour.

You asked about the sky. We know the sky is blue and the sea does reflect some of this light. So, yes, it does play a role. 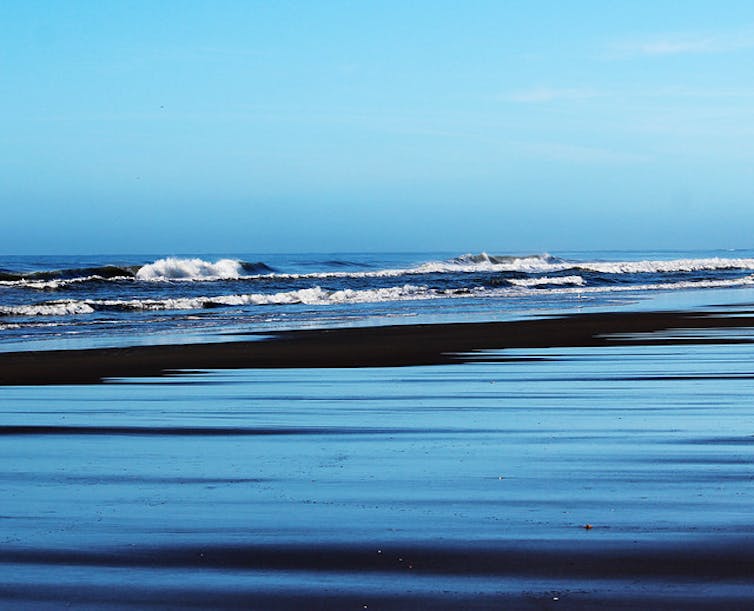 It’s true the sky does play a role in how our eyes perceive the colour of the sea. But it’s not the only factor. renê ardanuy on/off/flickr, CC BY

To sum it all up: the sea is blue because of the way water absorbs light, the way particles in the water scatter light, and also because some of the blue light from the sky is reflected.

Finally, we need to think about the time of day and the position of the Sun in the sky. When the Sun is shining bright, the sea appears bluer than it does late at night, when the sea looks very dark and almost black.

Like many questions in science, the answer is not as easy as a simple yes or no. There are often lots of correct, but incomplete, answers to many questions. To me, that’s what makes science so interesting.