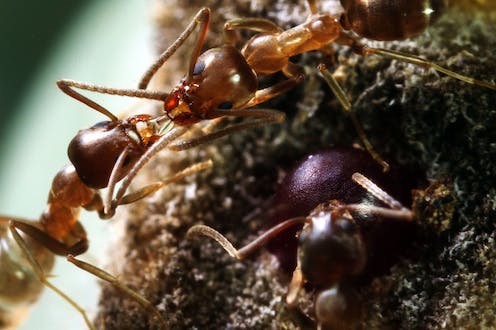 Argentine ants are a fact of life in many parts of Australia, but can still potentially be banished from Norfolk Island.Davefoc/Wikimedia Commons, CC BY-SA

Amid all the usual items we expect to see in the federal budget was one that raised eyebrows: A$28.8 million for three ant eradication programs.

Yet amid the inevitable media puns about the...

Amid all the usual items we expect to see in the federal budget was one that raised eyebrows: A$28.8 million for three ant eradication programs.

Yet amid the inevitable media puns about the government “upping the ant-e”, we should note that these funds are for the continuation of existing programs that have already attracted significant funding and made substantial progress. Stopping now would have meant previous funding was wasted.

The funds will go a long way towards protecting Australia’s economy and environment from the damage wrought by invasive ants. But despite the apparent cash splurge, it nevertheless falls short of what is really needed.

Of the $28.8 million, $18.3 million was for the National Red Imported Fire Ant Eradication Program. These funds are part of a $411 million, ten-year program begun in 2017 to eradicate red imported fire ants from southeast Queensland, the only place they are found in Australia.

Removing these pests will avoid an estimated $1.65 billion in total costs to 19 different parts of the economy. With previous funding, the program eradicated these ants from 8,300 hectares near the Port of Brisbane, making it the world’s largest ant eradication to date. 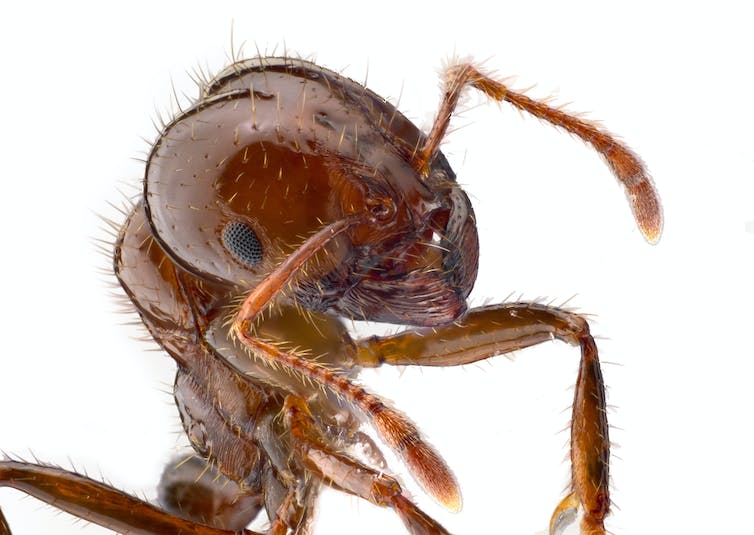 The red imported fire ant is one of three species put under the microscope by the 2019 budget. Invasive Species Council/AAP

The Yellow Crazy Ant Eradication Program was allocated $9.2 million over three years. Yellow crazy ants have caused a cascade of ecological effects on Christmas Island, and at their peak abundance temporarily blinded a Queensland cane farmer with their acid spray.

The Wet Tropics Management Authority, which runs the program, had requested $6 million per year for six years to continue removing the ant from in and around the Wet Tropics World Heritage Area. The federal funding is $3 million short of this, and the authority is still waiting to hear whether the Queensland government will provide the remainder.

Since 2013, the program has received $9.5 million from the federal government (and $3 million from the Queensland government). No yellow crazy ants have been observed in about half of the target area in more than a year. A yet-to-be published analysis estimates the benefit-cost ratio for the program as 178:1.

“It’s a mop-up operation… we’ve got our foot on the throat of this thing.”

A further $1.3 million was allocated to the Argentine Ant Eradication Strategy on Norfolk Island in the South Pacific. Argentine ants have invaded places with Mediterranean-type climates all over the world, including southwestern Western Australia and parts of southern Australia, and become firmly established. But unlike those areas, the population on Norfolk Island is still considered small enough to be eradicable, and federally funded efforts to remove them began in 2010.

What is ant eradication?

Ant eradication means removing all individuals of a particular ant species from a given area.

The first step is to define the extent of that area. Depending on the species, this may involve visual searches and/or placing lures such as sausages, cat food, or jam to attract the ants. The public can help by notifying relevant authorities of unusual ants in their gardens, and by not transporting materials that have ants on them.

The second step is treatment. Currently, the only way to eradicate ants is with insecticidal baits. Ants’ social structure makes this particularly challenging: killing the queens is vital for eradication, but queens typically stay sheltered in the nest – the only ants we see out foraging are workers.

Some of the most problematic ant species can have hundreds of queens and tens of thousands of workers per nest. They can reach extraordinarily high densities, partly because invasive ant species, unlike most of our native ant species, do not fight one another for territories. 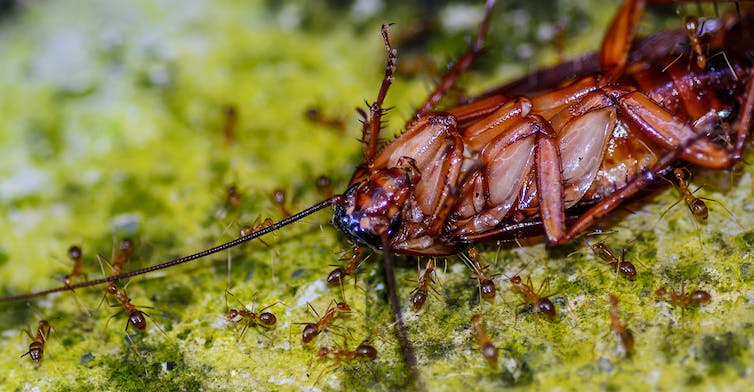 Beating ants means turning their biology against them. Bait needs to be attractive enough for workers to bring back to the colony and share, but not so deadly that they die before they get there. (And yes, this means if you’re spraying foraging ants in your kitchen you won’t get rid them for good, because the queens are somewhere hidden, laying more eggs and making more ants.)

Most ant eradication programs take three to four years to fine-tune their baiting regime because of a multitude of factors that need to be considered, such as seasonal changes in ant foraging behaviour and food preference, and the desire to avoid harming non-target species. Typically, two to six treatments are required, depending on the ant species, the size of the area, and the habitat type.

The hardest part of ant eradication is the end-game. Getting rid of the final 1% requires first finding them. This may mean painstaking searches through hundreds of hectares of bushland and residential areas, and the placement of hundreds of thousands of lures. Detector dogs can be very helpful, but they cannot be used in all environments and also need substantial resources for training, handling, and maintenance.

Ironically, it is at this stage that public and political support for eradication programs is most likely to wane, because ant numbers are too low to be seen as a threat to the public, economy or environment. Yet it is vital not to stop now, or else the remaining 1% will simply build up their numbers again. Experienced staff are also lost when programs suffer cuts or delays in their funding.

Read more: Eradicating fire ants is still possible, but we have to choose now

Disappointingly not mentioned in the budget was funding for eradicating electric ants. Like red imported fire ants, electric ants have a painful sting, and when left to multiply will eventually turn gardens and swimming pools into no-go zones. They also pose a significant threat to native animals such as the southern cassowary, and can blind animals as large as elephants.

They are currently only found in the Cairns region. The National Electric Ant Eradication Program, funded by federal and state governments, ran from 2006 until 2017 and had likely reduced numbers down to that last 1%. The program has been running on state funding with reduced staff since then, but several new detections in the past three months demonstrate the cost of the gap in funding.

In those inevitable “federal budget winners and losers” lists, invasive ants have found themselves firmly in the losers column for 2019. But it’s worth remembering that most of the world’s roughly 15,000 known ant species provide vital services for the functioning of our ecosystems.

They aerate soil and redistribute its nutrients, protect plants from herbivores, disperse seeds, and repurpose dead organisms. They may even help slow down the spread of those pesky invasive ants that are much less friendly.