A catastrophic event occurred on Earth 66 million years ago. A huge meteorite struck our planet in what is now Mexico, triggering mass extinctions of the dinosaurs and most other living creatures.

A new paper shows the first recorded victims of this impact were fish and other marine animals, stranded by a wave that left them high and dry in an ancient river in North Dakota, at a site called Tanis.

For scientists unpacking the evidence around the event, a full picture of the cataclysm has involved looking into the details of planetary surface physics during giant impacts.

But beyond the first layer of fascinating results – little glass impact beads stuck in the gills of fish, for example – one really interesting aspect of this work is around how water behaves when it’s exposed to extreme forces.

If you’ve never heard of a form of wave called a seiche, this is your chance to catch up.

This is a seiche – a standing wave – in a swimming pool, during a large earthquake in Nepal.

The Chicxulub meteorite crater in coastal Mexico is strongly associated with the mass extinction of the dinosaurs (and 75% of all species), 66 million years ago.

The first victims were right at the site. Any marine creatures close to the point of impact would have been instantly vaporised (sadly leaving no fossil record), along with much of the surrounding rock.

Around the periphery, the energy of the impact melted and ejected tonnes of molten rock, which together with condensing rock vapour, formed little glass beads (“impact spherules”) that can be found in a layer around the world at this time.

The shock wave itself pulverised the adjacent rock enough to metamorphise it, forming features like “shocked quartz” – fractured quartz indicative of enormous pressures. It carried the energy equivalent of a magnitude 11 earthquake – 1,000 times more energy than the 2004 Boxing Day quake which killed almost 230,000 people.

North Dakota is more than 3,000km away from the Chicxulub crater, and was a similar distance at the time of the meteorite impact event.

Separating them back then, however, was a vast inland sea that covered much of midwest USA, from Texas up to the Dakotas. Feeding into that inland sea was a river system upon which the Tanis site in North Dakota was formed. This site has preserved the earliest recorded deaths of the Chicxulub impact. 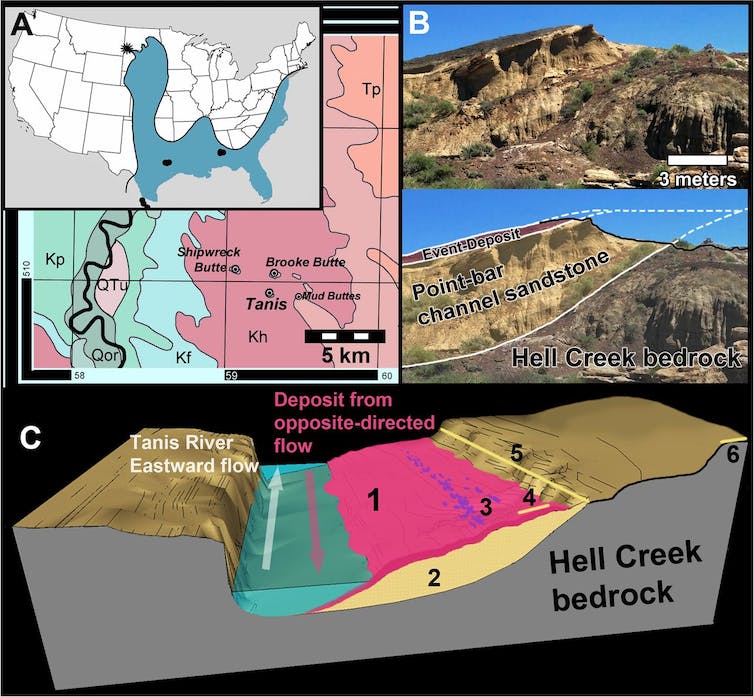 Different views of the Tanis site. A: Tanis (starred) within a regional context (large map) and on a national map (inset). B: Photo and interpretive overlay of an oblique cross-section through Tanis. C: Simplified schematic depicting the general deposits at the site (not to scale). Most fish carcasses were found at point 3. Robert A DePalma and colleagues

The site itself is unusual. The deposition of sediments can tell us about the flow of water in the river.

Most ripples (or flame structures) indicate a southerly flow of the river before and after the Tanis deposit. However, these flow indicators point the wrong way during the time the Tanis unit formed. Water was flowing upstream, fast.

At the site are also found the fossilised remains of species, like sharks and rays, that occupied brackish water, rather than the freshwater of the stream. These had to be brought inland from the sea by something, and left to die, smothered in sediment, on a riverbank.

The obvious candidate is an impact tsunami. Perhaps the impact of the meteorite hitting the ocean generated a huge wave that carried fish from the inland sea, and against the flow of fresh water, to leave the creatures stranded in Dakota?

But there are problems with this hypothesis. The tiny impact spherules that formed in Chicxulub can be found throughout the deposit (many clogging the gills of fish), and pockmarks in the sedimentary layers means rocks were still raining down. This means the surge of water occurred within around 15 minutes to two hours of the impact itself.

For a tsunami to travel the 3,000km from the point of impact, to the Tanis site across the inland sea, would have taken almost 18 hours. Something else killed these creatures.

The seismic waves from the impact would have travelled through the Earth much faster than a tsunami travelled across water – and arrived near Tanis between 6-13 minutes later. The authors of the Tanis study suggest these seismic waves may have triggered an unusual type of wave in the inland sea, called a seiche.

Seiches are standing waves in bodies of water, and are often found in large lake systems during strong winds. The winds themselves cause waves and water displacement, which can have a harmonic effect, causing the water to slosh side to side like an overfull bathtub.

However, earthquakes are also known to cause seiches. Particularly dramatic seiches are often seen in swimming pools during large quakes. The interaction of the seismic wave’s period (the time between two waves) with the timescale of waves sloshing in a pool can amplify their effect.

But seiches can affect larger bodies of water too.

During the 2011 Tohuku earthquake in Japan, seiches over 1m high were observed in Norwegian fjords more than 8,000km away. With an energy more than 1,000 times greater, the Chicxulub event could quite conceivably have generated bigger than 10 metre swells in the North American inland sea – the scale implied by the deposition of the Tanis site.

These waves in Norwegian fjords were created by seismic waves from the 2011 Tohoku earthquake in Japan.

Given a seiche can be driven by seismic waves, it’s conceivable that one drove the surge that stranded marine creatures at Tanis, resulting in the short time between the impact debris and the surge deposit.

But a lot remains unclear regarding exactly what did happen 66 million years ago.

Could the fish stranding have been driven by the first seismic activity to appear at Tanis (the P and S waves in science parlance, which travel through the interior of the Earth, arriving at Tanis 6 and 10 minutes after impact, respectively), or the more destructive but slower surface waves at the top of the Earth’s crust, which arrived 13 minutes after impact?

How might seiche waves have interacted with global hurricane-strength wind storms caused by the impact?

Would the period of sloshing of a seiche be consistent with the scale of the inland sea? (The inland sea was much larger than most lakes seiches are traditionally observed in – and may or may not have been open to the ocean). Given so little is really known about the dimensions of the inland sea, this is hard to constrain.

The Tanis site has given us an incredible window into the first few hours of a mass-extinction. But it has also highlighted how little we have probed into the fatal surface physics of these extreme events.