There are currently about 1.2 million people of Chinese origin in Australia. Approximtely half of them were born in China and speak Mandarin in the home. For those who have come from a one-party state where electoral voting is a foreign concept, figuring out which party to vote for is part of the process of learning how to be citizens in a democratic society.

Recent state elections show that the widespread adoption of the social media platform WeChat by Chinese-Australians has led to a much higher level of political participation. We’ve also seen that this community is as divided politically as English-speaking Australians.

But whose information and opinions do Mandarin-speaking voters trust? And who is more likely to influence how they vote? 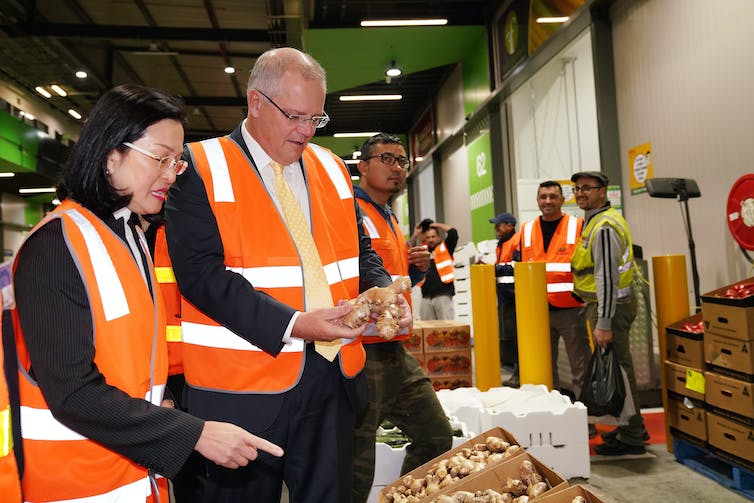 Prime Minister Scott Morrison has his own WeChat account now, but the reach of Mandarin-speaking candidates like Gladys Liu is far wider. Stefan Postles/AAP

These are among the first set of questions we posed in a longitudinal study of the role played by Chinese-language digital media in the political, economic and cultural lives of Mandarin-speaking migrants in Australia.

Since the beginning of the year, we have been closely following a number of WeChat groups based in Melbourne, Sydney and Perth, in addition to a couple national groups. We also conducted a large survey of Mandarin-speaking social media users on Survey Monkey last month.

Read more: Chinese social media platform WeChat could be a key battleground in the federal election

We asked the participants who are citizens (and thus able to vote) to identify their main sources of information about state and federal elections. We then combined our ethnographic and survey results to present the following key findings:

We found that an important source of information and influence in the Mandarin-speaking community comes from postings on WeChat’s “Moments” feature, which is similar to Facebook’s timeline except the information shared on Moments can only be accessed by a person’s friends and acquaintances, not by others.

Around 26% of citizens surveyed said that postings by friends on Moments was one of their primary sources of information on political news. These people tended not to invest much time in deciding how to vote. They trusted the opinions of friends more than the media, politicians and public commentators. People in this group were also often less educated, less proficient in English or less engaged in politics.

On the days leading up to the recent NSW election, we frequently saw postings such as:

Have to vote in the state election this weekend. Any ideas who to vote for?

Best stick with Liberal. They’re better at managing the economy.

2. WeChat groups are a growing source of influence

Most WeChat users are members of several WeChat groups, which are self-formed, private messaging communities that can include up to 500 members. In our survey, around 22% of participants cited information shared in WeChat groups as another important source of electoral information.

Unlike friends on Moments, members of a particular group may be unknown to each other. Groups can based on special interests (parenting, gardening, cooking), place of origin (the Shanghai Migrant Association), or current place of residence (Chisholm in Melbourne). In the period leading up to elections, the topic of discussion in many of these groups tends to pivot towards the pros and cons of the major political parties.

WeChat groups with a more explicit political agenda are usually created and administered by candidates of Chinese heritage, or by friends and supporters of these candidates. Although the partisan nature of some groups is clear, they usually include some members from across the political spectrum. Debates in these groups often becomes very heated, sometimes quite combative.

Read more: Thinking of taking up WeChat? Here's what you need to know

As many as 50% of Chinese-Australian voters we surveyed also named mainstream English-language media as a source of information and opinion on politics. But our ethnography suggests that this information is only consumed after it has been processed, curated and framed within a particular editorial stance by bilingual gatekeepers within the Chinese-speaking community.

For example, an active member in a Perth-based WeChat group made three posts in quick succession a couple of weeks ago. The first, in Chinese, said:

The Sydney Morning Herald reported eight years ago on Scott Morrison’s proposal to use anti-Muslim sentiment to win votes – a claim that Morrison did not deny at that time.

His second post was a link to News.com.au journalist Malcolm Farr’s recent story about Morrison accusing TV presenter Waleed Aly of lying over this issue. The third post quoted a few key paragraphs from Farr’s story.

From the first post, it’s clear the WeChat group member is not a fan of Morrison’s. And this frames the news in a certain way for other members of the group.

Politicians like Morrison and Bill Shorten may have their own WeChat accounts now, but they are not as influential as candidates of Chinese heritage. About 23% of voters in our survey said WeChat messages from Mandarin-speaking political candidates were their primary source of information about elections. Mainstream politicians scored only 13%.

Chisholm Liberal candidate Gladys Liu’s WeChat account illustrates this finding. Her site lists a series of stories – no doubt put together by her supporters – detailing how Liu helped individual members of the Chinese community in need.

These feel-good stories were also widely circulated by Liberal supporters on WeChat. Liu is very active in WeChat groups, and often takes time to respond to messages that challenge her on particular issues. 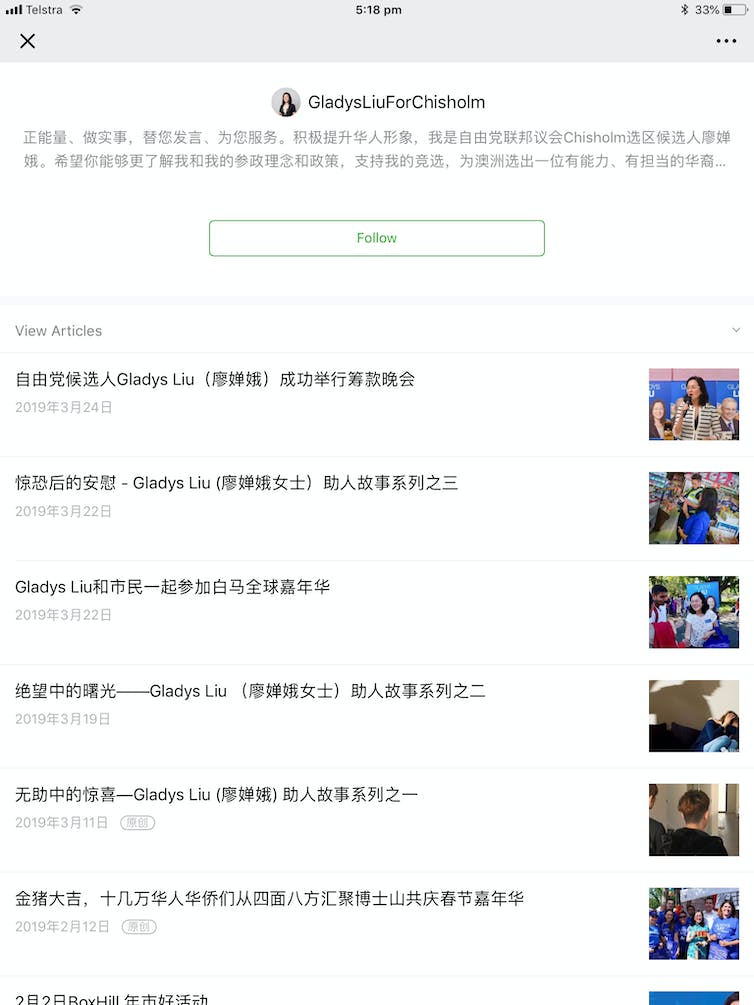 5. The emergence of new opinion leaders

Chinese-language print magazines and newspapers have long been key influencers of community sentiment, but this status is increasingly under threat.

Similarly, traditional community organisations are no longer as influential as they once may have been. These organisations were mostly established by migrants from Hong Kong, Taiwan and the Cantonese-speaking areas of China before the arrival of large numbers of Mandarin speakers from China in the last couple of decades. They also predated the emergence of social media platforms such as WeChat.

New opinion leaders tend to come from within the ranks of individual WeChat users. Many are able to marshal large followings on their WeChat subscription accounts. They tend to be bilingual (Mandarin and English) and have a constant presence in WeChat group discussion. Their opinions or analyses are informed by their own understanding of Australian party politics.

These opinion leaders often emerge organically through interactions with other WeChat users and their influence usually rises and falls unpredictably.

Read more: How Australia’s Mandarin speakers get their news

These findings should provide food for thought for Australian politicians wishing to reach out to Chinese communities.

WeChat has shown a promising capacity to facilitate civic engagement and promote democratic dialogue among Chinese-speaking migrants. But the government and non-Chinese-speaking politicians need to do their homework to figure how to use this platform effectively and make an impact on voters whose trust, at times, has been hard to win over.