These foodbowls also increase the resilience to pressures on city food supplies from climate change, particularly drought. But Australia’s cities are growing rapidly and their foodbowls are under threat as farmland gives way to housing.

Read more: The key to future food supply is sitting on our cities' doorsteps

The Foodprint Melbourne research project today released its final report outlining a “roadmap” of recommended actions for protecting and investing in Melbourne’s foodbowl. And there are signs that state governments are waking up to the threat to fresh food supplies.

In Victoria, the government recently began public consultation on protecting Melbourne’s farmland. The government has committed to permanently protect “strategic agricultural land” on the city fringe.

This is an important step in preserving Melbourne’s foodbowl. Existing measures to protect this farmland – including the city’s urban growth boundary and “green wedges” – have not prevented ongoing loss of farmland. Stronger measures are clearly needed. 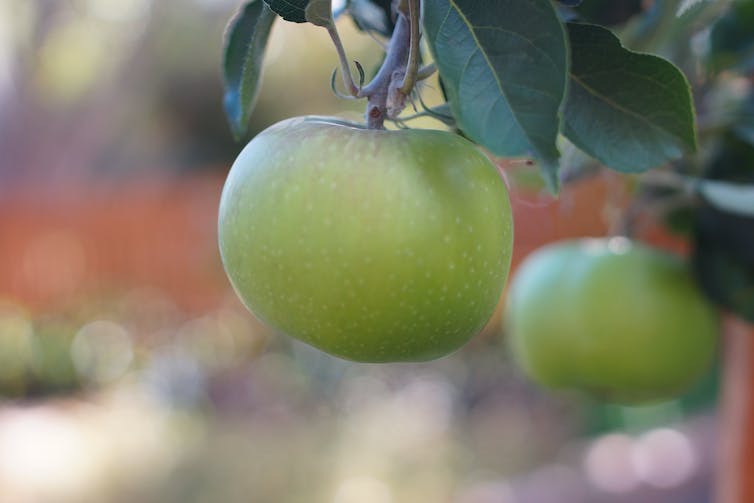 Apple orchards are among the farmland that has been lost to urban growth. Matthew Carey/Foodprint Melbourne, CC BY-NC-SA

What actions does the roadmap present?

Collaboration with stakeholders from local and state government, industry, civil society groups and farmers has informed the roadmap of actions to protect Melbourne’s foodbowl.

The report recommends permanently fixing the city’s urban growth boundary and introducing a “food production zone”. This could reduce speculative investment in farmland at risk of development. These measures would also create confidence to invest in farms and infrastructure in the foodbowl.

Protecting farmland is a critical first step in securing Australia’s city foodbowls, but this alone will not be enough.

If Australia’s city foodbowls are to continue to feed cities, farmland protection must be accompanied by other strategies. These would promote farm viability, water access, sustainable farming and recycling of nutrients essential to food production (like phosphorous and nitrogen). 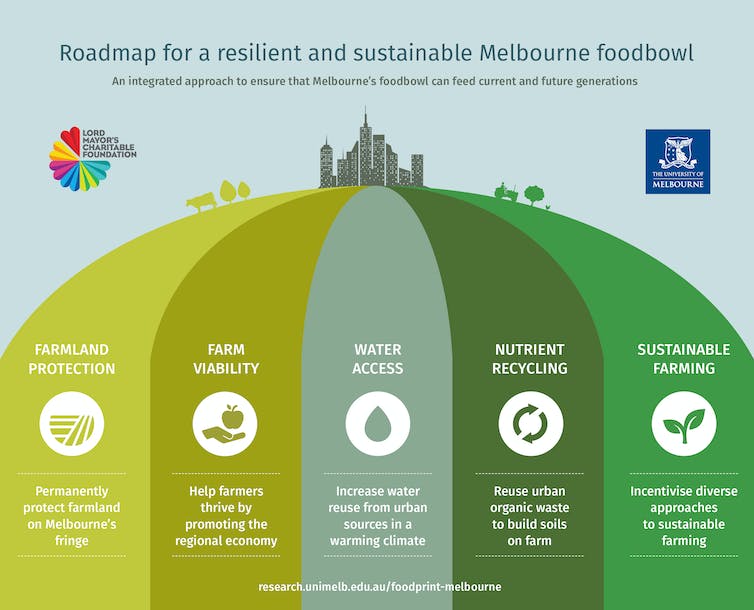 Roadmap for a resilient and sustainable Melbourne foodbowl. Foodprint Melbourne

Promoting the viability of farming in city foodbowls and ensuring farmers have access to water are just as important as protecting farmland.

City foodbowls have access to large volumes of city wastewater and organic waste. This can increase these farms’ resilience to growing environmental pressures on food production. City foodbowls offer opportunities to use natural resources more efficiently by creating circular food systems that “close the loop” on valuable resources from city waste by returning these to the soil.

City wastewater, such as recycled water from water treatment plants and treated stormwater, can provide a relatively secure source of water for food production in a drying climate.

Read more: When climate change hits our food supply, city foodbowls could come to the rescue

Composts and biofertilisers made from city organic waste can improve soils on farm. This is a more sustainable alternative to conventional fertilisers based on non-renewable resources (like phosphate rock).

Learning from other cities

Australia’s cities need to have flexible responses to increase the resilience of their food systems. This requires city planners to take a precautionary approach now to protecting their foodbowls. International leaders in protecting city fringe food production, such as Toronto and Vancouver in Canada, offer valuable lessons in how to achieve this.

Read more: Feeding cities in the 21st century: why urban-fringe farming is vital for food resilience

Our report recommends that Melbourne follow Vancouver in developing an integrated food systems planning strategy. This will support collaboration between government departments and other stakeholders in promoting farm viability, water access, nutrient recycling and sustainable farming in the city’s foodbowl.

The report also recommends that local governments on Melbourne’s fringe should form an alliance to develop a common vision and actions to strengthen the city’s foodbowl – as the Golden Horseshoe Food and Farming Alliance has done in Toronto. And it emphasises the importance of actively promoting city foodbowls to the public. The Friends of the Greenbelt Foundation in Ontario is a good example of this.

If Australia’s city foodbowls are to keep producing fresh local food for current and future generations, the public needs to be more aware of city fringe farmers’ role in feeding cities.