Following the tragic attack in Christchurch that killed 50 people as they prayed, I felt compelled to visit the injured in hospital, and meet their family and friends.

I also visited others in their homes, alongside an elder and pioneer of the New Zealand Islamic community, the man who helped establish Al Noor Mosque where most of the victims were killed.

Their stories of survival are moving, sometimes remarkable and often deeply sad.

Read more: How to take care of your mental health after the Christchurch attacks

But the common thread in their response to the horrific events of March 15 is profound bravery, deep consideration and thoughtfulness, and a complete lack of desire for vengeance.

At the hospital, I met Ahmad, a middle-aged man from an Afghani background. He said he survived because he was buried under the dead bodies that piled up in the mosque. Although he was shot twice in the back and was lucky to survive, he was not angry or resentful.

When asked about his abiding thoughts now he said:

I then visited Fuad, another middle-aged man originally from Afghanistan who also escaped death. He had been struck by a bullet in the back and another just missing the back of his head.

His wounds were visible. He told me, with four children, he was just grateful to be alive. Not resentful or vengeful, he was full of praise for Prime Minister Jacinda Ardern and her deep expression of humanity.

Mustafa, a young university student of Turkish heritage, was shot in the legs. One of the bullets exploded in his leg and it is difficult to know the long-term impacts – but he smiles and is cheerful, kind and respectful to the nurses who care for him.

Like the other two, he was not hateful. He said:

We trust in God. Don’t be scared to go to Mosques and schools.

He was quick to point out terrorism would serve its purpose if it made people afraid – our fear is their victory. 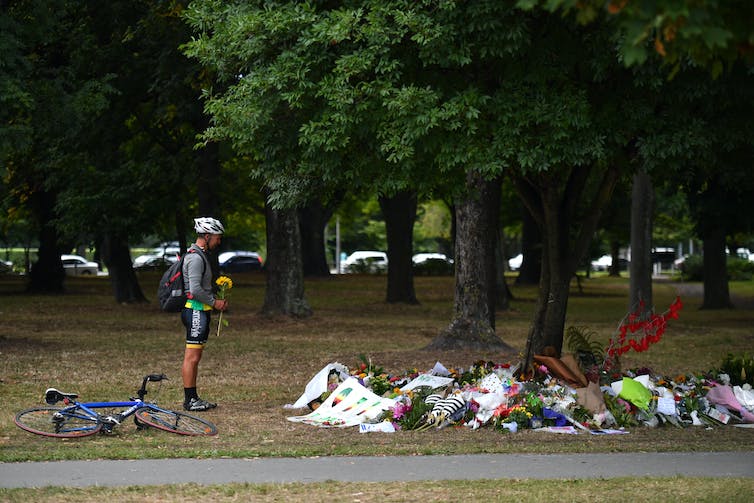 A cyclist prepares to lay flowers at a makeshift memorial near the Al Noor Mosque on Deans Rd in Christchurch, New Zealand, Tuesday, March 19, 2019. Mick Tsikas/AAP

Still in shock from seeing the events at Al Noor mosque unfold, Burhan, a Sudanese man in his 60s, stood in the hospital corridor. That Friday at the mosque, he heard the shooting but was not sure if it was real.

He then saw two men shot dead, one on his right and the other behind him.

He ran outside and hid behind a car but could see the shoes of the terrorist as he continued to fire. He watched as a father ran out with his three-year-old daughter in his arms calling out “my daughter!”.

Both had been shot multiple times and both remain in critical care.

A young man in his 20s whom I had met when we completed the hajj pilgrimage last year, witnessed the gunman as he shot that young father and child.

Not unscathed, he too was shot in the hip and shoulder and his father only survived by pretending to be dead.

Without anger and strong in his faith he said:

the Prophets of God were tested more severely.

Down every corridor the message was the same – the survivors urged unity and the strength to resist hatred, racism and vengeance.

At the community centre later that day I met Adnan Ibrahim the father of the youngest of the 50 victims killed at the two mosques. His son, Mucad Ibrahim, was only three years old.

Before he was killed, he had run toward the gunman thinking it was a game.

As Adnan retold the events, everyone became very silent. In deep pain and sorrow, he showed grace and dignity.

Verily we belong to God and to Him we shall return.

His most present thoughts were about the sad condition of humanity, that such things could happen.

Read more: The psychology of fear and hate, and what each of us can do to stop it

On my way to the carpark, I met Matiullah, a young man under 20 years old. I greeted him and asked if he lost anyone. He told me his father was killed while standing in prayer at the mosque. I embraced him and was struck by his gentleness and calmness.

The community elder Dr Hanif Quazi took me to see Ambreen Nadeem, who lost both her husband and her 21-year-old son, Talha.

Talha was completing an engineering degree. The entire family were planning to visit Pakistan in June and the tickets were booked.

As I met her with her two remaining sons, 17 and seven years old, I was filled with sadness.

I pity the killer because his heart was filled with hate, not love.

“Pray for us,” she added quietly. I did.

At a time when we could expect that anger, vengeance and resentment could take hold in a community so demolished by violence, I found the exact opposite.

They were compassionate. They were forgiving. They were humane. And this is what we need right now.