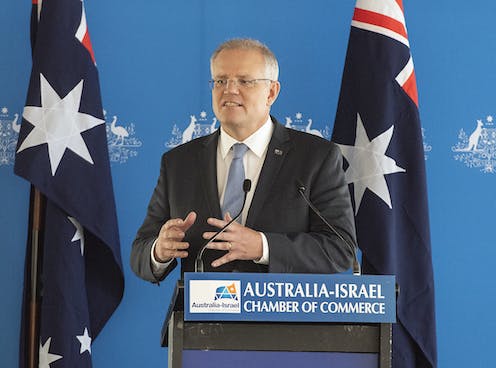 When The Project host Waleed Aly began his editorial in the wake of the Christchurch massacre, he apologised that “these won’t be my best words”.

He was wrong. The YouTube clip of his poignant commentary has been viewed millions of times in the last few days, and for good reason.

Among other things, Aly said:

I know there are reports going back eight years of a shadow cabinet meeting in which another senior politician suggested his party should use community concerns about Muslims in Australia failing to integrate as a political strategy. That person is now the most senior politician we have.

“The most senior politician we have” is clearly Prime Minister Scott Morrison.

Eight years ago, it was reported that Morrison, then opposition immigration spokesperson, saw “votes in [an] anti-Muslim strategy”.

At the time, Morrison declined to comment, while Prime Minister Julia Gillard said:

Mr Morrison, from today’s reports, appears to want to go down a very grubby path in the migration debate in this country.

More recently, several members of the (then) shadow cabinet, and Morrison’s office, deny there was any plan to “capitalise” on Islamophobia. The author of the original report stands by the story.

Can a prime minister sue a journalist, or a television network, for defamation?

Defamation is a “cause of action”: a basis for commencing litigation and seeking a remedy from a court. Australian defamation law strikes a balance between the protection of reputation and the protection of freedom of expression. Sometimes, protecting one means diminishing the other.

Even the most unpopular politician has a reputation. Where another person – or a company, like a news organisation – publishes something that damages that reputation, the publication is “defamatory”. Unless the publisher has a defence, the defamed politician may be able to obtain damages to clear his or her name.

In recent years, several politicians have been willing to go through with their threats and sue for defamation, usually in response to negative news coverage. A notable recent example is the litigation brought by Joe Hockey, former federal treasurer and now ambassador to the United States.

Hockey sued Fairfax in a defamation claim that attacked coverage of his fundraising activities. The role of money in politics is a hot topic in any democracy; coverage of the subject was in the public interest.

Nevertheless, Hockey obtained $200,000 in damages because the newspaper harmed his reputation.

Some visible defenders of “freedom of speech” have been willing to diminish that of others when their own reputations were on the line. Two decades ago, federal ministers Tony Abbott and Peter Costello, and their spouses, sued a book publisher for defamation over a manuscript that contained false and defamatory content.

In other cases, pollies have threatened defamation but failed to follow through. US President Donald Trump has repeatedly threatened to sue the organisations behind what he calls “fake news”.

When former NSW Labor leader Luke Foley was accused of sexual harassment at the height of the #MeToo movement, he threatened defamation but then backed down. The mere threat of litigation, or the burden of defending litigation, might be just as valuable as a court order: each may serve as a political weapon.

Would Aly have a defence?

A defendant to defamation litigation can mount several defences.

First and foremost, a defendant can argue that the publication was justified if it was substantially true. But the defendant has the job of proving that, on the balance of probabilities. In the case of stuff that happens at cabinet meetings, it will be difficult to prove what was said in the absence of evidence from anyone who was actually there.

Another relevant defence is called “qualified privilege”. This defence recognises that the public interest is served by open communication and that, in limited circumstances, it may be necessary to publish statements that may harm another’s reputation, even if the published matters turn out to be inaccurate. If the publication was made with “malice”, this defence won’t be available.

The High Court has wielded the qualified privilege defence to protect the implied freedom of political communication in the Commonwealth Constitution. The court confirmed that the defence requires the defendant to have acted reasonably.

Other defences may also be relevant to claims brought by politicians, depending on the facts.

In the present case, for Aly to comment on an eight-year-old report of something Morrison said about immigration, in circumstances where Morrison did not deny the report at the time, seems reasonable to me. The context of Aly’s comment was an ongoing debate that is obviously in the public interest.

In an environment where certain politicians and public figures spew bile for populist ends, the law ought to protect those like Aly who are willing to put their necks on the line and call it out.

And, in any event, if the prime minister is offended by the allegedly erroneous reporting of an old shadow cabinet meeting, why didn’t he sue those behind the original report eight years ago?

Politicians should refrain from suing for defamation

There are things that could be done to prevent pollies from suing their critics. Courts could develop the common law to bolster defences, further dissuading lawsuits. New Zealand’s top court recently recognised a defence of “responsible communication on a matter of public interest”, which would be very welcome in Australian law.

A NSW-led working party is considering reform of Australia’s uniform defamation laws. It might instigate this kind of defence.

But there are many other ways to rebalance defamation law’s position on reputation versus freedom of speech. In the United States, for example, a “public figure” doctrine makes it very hard for politicians to successfully sue in defamation. Australian law lacks this defence; it also lacks the US Constitition’s First Amendment.

In an ideal world, we would not need to reform defamation law to stop politicians suing journalists. Politicians should just refrain from litigating. A valuable difference between a liberal democracy and an autocracy is that in our system we are (or should be) free to criticise government officials without fear of reprisal.

On the other hand, there will always be cases where flawed news coverage or political commentary inflicts serious damage on politicians. Every now and then, news really is fake. In an environment where media power is concentrated in the hands of a few, defamation law can still play an important role.

I believe that where genuinely bad behaviour needs to be called out by pollies, it can be done through other forums. Wherever possible, conflicts should be ventilated through public discourse, not through the judicial system.

For politicians, re-election – or being voted out – is a far more potent remedy than a damages award from a court.