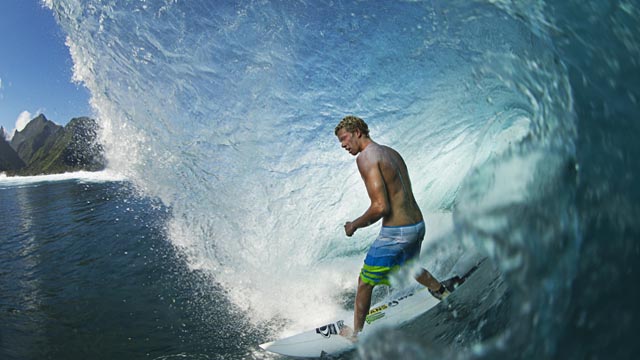 View From A Blue Moon will be digitally released through iTunes, Amazon, Google Play, M-Go, Vimeo On Demand, and other digital platforms in HD as well as DVD/Blu-ray with worldwide premieres taking place on November 11 and 12. Pre-order is available now through Vimeo On Demand and DVD/Blu-ray.

The film’s jaw-dropping trailer was also released today and can be viewed at www.viewfromabluemoon.com.

The Australian Premier, and very first public screening globally, of View From A Blue Moon will take place at United Cinemas, Collaroy on November 11.

The film will be released at the same time, on the same day worldwide meaning that Hurley Australia will host the first ever public screening.

The fifty minute feature film follows the world’s most dynamic surfer - 23 year-old John John Florence as he and his closest friends head off from his home on Hawaii’s North Shore to his favourite surfing destinations around the globe.

The first surf film shot entirely in 4K View From A Blue Moon shows the sport of surfing as it’s never been captured before in John Florence and Blake Vincent Kueny’s second signature release, this time in association with the Emmy award-winning production company Brain Farm.

From the dreamy blue perfection of the South Pacific to the darkest uncharted waters of Africa (and everywhere in between), Florence faces a broad spectrum of emotions as he continues to seal his legacy as one of the most gifted surfers ever, redefining what is possible in the ocean.

“I’ve always been interested in documenting my travels,” says Florence, “maybe it was because my mom had us on the road so much when we were kids. I made a list of all my favourite places to live and surf, narrowed it down to seven, blocked out big chunks of time and invited my friends and family to along. In some places, we’d set up camps for weeks, even months. In Hawaii, we documented two full winters.”

And the world pro’s favourite thing about the film? “How we made it. The toys we used might have been bigger and more expensive than our previous projects but we shot this movie in the same spirit we always have. We spent time with family and friends in my favourite places on the planet. We went surfing. And we documented it so we could take it home with us.”

Sponsored by Hurley, JJF has created his ideal boardshort exact to the pro’s own specifications – the Phantom JJF II Elite. Worn throughout the film, Florence’s signature camo print short is built for powerful conditions. The iconic surf brand makes it easy for you to browse their athletes’ must-haves online.

VIEW FROM A BLUE MOON (Film Synopsis)
http://www.viewfromabluemoon.com/
See the sport of surfing as it’s never been captured before in John Florence and Blake Vincent Kueny’s second signature release, this time in association with the Emmy award-winning production company Brain Farm. The first surf film shot entirely in 4K, View From A Blue Moon follows the world’s most dynamic surfer John Florence and his closest friends from his home on the North Shore of Oahu to his favorite surfing destinations around the globe. From the dreamy blue perfection of the South Pacific to the darkest uncharted waters of Africa (and everywhere in between), Florence faces a broad spectrum of emotions as he continues to seal his legacy as one of the most gifted surfers ever. And while the young Hawaiian is pulled in increasingly different directions, there is no form of pressure that will keep him from his ultimate goal — to redefine what is possible in the ocean.

Born and raised on the North Shore of Hawaii, 22-year-old John Florence learned to dominate difficult surf, developed awe-inspiring aerial techniques and established a natural style at an early age. In the surf world he is better known as “John John,” and one will typically hear this name tossed about in any conversation about the future of surfing.

2012 marked John’s first full year on the ASP tour, and he didn’t disappoint – placing 4th for the World Title, taking his first WCT win at the Billabong Rio Pro and winning Rookie of the Year. However, hardly a rookie when it comes to surfing, John is a celebrated wunderkind who broke onto the surfing stage at only 5 years old. He became the youngest surfer to ever compete at the Vans Triple Crown of Surfing at thirteen, besting surfers twenty years his elder, and winning it outright a mere six years later at the unprecedented age of 19 and again in 2013.

John Florence combines competitive surfing dexterity with an impeccable natural ability that is quickly paving the way for a new generation of surfing. Taking many moves from skateboarding influences, his technical skill set and remarkable ability to conquer waves from two to thirty feet make him a fierce competitor whose stock is rising faster than the Banzai Pipeline - where it all started. Despite being touted as the next big thing in the surfing world, John remains incredibly humble, still heading out to surf with his mom and two brothers whenever he can. John is also an avid photographer and filmmaker when he’s not surfing.

Designed to the exact specifications of John John Florence. The Hurley Phantom JJF 2 Elite Men's Boardshorts feature zero waistband that keeps you solid when the waves are. A 21" length offers added protection in the water with welded construction for added strength all in JJF's signature cargo print.

The essence of Hurley is based on our love of the ocean and its constant state of change.  With deep roots in beach culture, we are all about inclusion and positivity.

Our brand was started with the idea of facilitating the dreams of the youth.  Music and art are the common threads that bring us all together.

We are passionate about freedom of expression and the individual voice.  We place a premium on smiles.  Welcome to our world, imagine the possibilities http://www.hurley.com.au