Do you make the 7/11 worker Indian? Or is that offensive? If you make them white …well … you’re lying really.

But also, you’re taking a job away from an Indian actor if you don’t.

This exchange, the first comment from actor-comedian Josh Thomas and the second by Celia Pacquola, during a panel discussion at the Sydney Opera House in 2016 was shared on social media this week. It has re-energised discussions about the lack of cultural diversity in the Australian arts scene.

Compare Thomas’s comments with an interview I did with a young Iraqi man, also in 2016, after a workshop on diversity in the arts in Western Sydney. Ziad said

I do so many of these talks and the white person in the crowd will be like, ‘Thanks for sharing, it’s a great start’. Like, great start really? … We have been having these conversations for 15 years already, you should know by now … It’s so frustrating because that ignorance is such an easy cop out and it doesn’t change anything. In five years’ time I could give the same talk and someone in the audience will say the same thing. They just want to give themselves a pat on the back, like, ‘good job me’, and go back to their normal lives.

Conversations about cultural diversity in the arts have been running on a parallel track. Against the backdrop of the Black Lives Matter movement they seem to have finally come to a head.

Many Australians are interrogating how whiteness has been fundamental to shaping our settler-colonial society – and how race has been depicted in performance. Comments like Thomas’s have taken centre stage in public debate about the kind of society we want to live in.

The panel discussion clip was shared a week after actor Meyne Wyatt passionately closed the ABC’s Q&A program with his monologue about injustice towards Indigenous Australians.

‘Sometimes I just want to be seen for my talent – not my skin colour,’ said Meyne Wyatt on Q&A.

The immediate online backlash to Thomas cast him as racist. But people of colour working in the arts offered more nuanced responses.

Rather than focus on Thomas, it is the nature of the panel discussion and how it centres the white experience that needs deeper analysis.

Additionally, it shows how difficult it is to challenge race-thinking and stereotyping – especially as a person of colour just starting out. Thomas’ comments are a symptom of systemic racism – not the whole problem.

Read more: Explainer: what is systemic racism and institutional racism?

Creative work is different to a lot of other jobs

In Australia it is illegal to engage in hiring practices based on race, gender, sex and age. But these are usually the attributes that can make or break your chances as an artist.

This harsh reality often confronts people of colour, who get into the arts hoping to freely express themselves.

My research includes over 30 interviews with young people of colour about how race, gender and socio-economic status shapes their experiences.

Because the arts scene is often based on unspoken rules, networking and gatekeeping, there are generally no channels for complaint if you are typecast or overlooked as “inexperienced” based on race.

Networks have to be maintained and that can mean accepting work perpetuates racist stereotypes because those are the easiest stories to tell.

The personal is political

Young people trying to get work in the creative industries face many structural challenges early on in life that, over time, become compounded.

One of the participants in my research, who worked in publishing, illuminated this:

When I have been on hiring panels, I’ll say we need to try and recruit people of colour and they’ll be like, ‘Well, no Indigenous or Black person applied’. Or in the writing scene, ‘Oh there aren’t enough writers of colour or their stories aren’t good enough’.

The problem doesn’t start at the point of job ads. Like for me, it starts when I was born. I grew up in housing commission, I went to shit schools, we got moved around because we were displaced when they [the government] took over our building, and the fact that I have enough experience is a fucking miracle.

In the 2016 panel discussion, American TV writer Dan Harmon comments that diversity in the arts goes beyond what happens on screen. It’s the lack of support and resources available for young Black children, for example.

My research echoed this disadvantage in the Australian context. Ibrahim told me:

I told the art teacher that I wanted to do an animation [for year 12 art assessment] but I was waiting for my father to buy me the camera that would allow me to do it. Because the school didn’t have the technology … at one point the teacher said to me “are you gonna work on something you can do?” He just didn’t believe I could do it.

In my research, being blocked from securing a gig based on racial stereotypes – like the hip hop artist who has to pretend to be Latin American instead of Arab Muslim – resulted in some young people suffering from poor mental health. 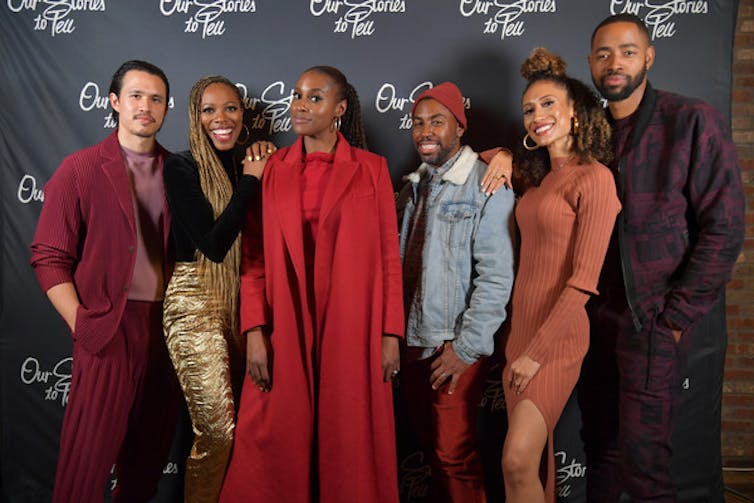 ‘It’s easier in the States,’ Thomas said during the panel discussion. Indeed Australian actor Alexander Hodge, far left, has found success in the cast of US show Insecure. IMDB

Some moved abroad to try their hand in the US or UK arts scene, as Asian Australian actors including Alexander Hodge have done. Others have become part of the “multicultural arts scene”. Some gave up on their dream altogether.

Rather than focus on Thomas’s apology, now is the time to ask whether arts gatekeepers really understand what cultural diversity means and to think beyond “adding colour” to the mix. It’s time for a deeper conversation about achieving transformative racial justice across our society, including the arts.