One of the surprise silver linings of the COVID-19 crisis is that childcare became free for all Australian families.

Australia has traditionally been viewed as a liberal welfare state where government policies are reserved for those in the greatest need and a “pick yourselves up by the bootstraps” mentality reigns.

Then COVID-19 hit and almost overnight, the economy ground to a halt. It’s hard to pick yourself up when your boots are nailed to the floor.

Read more: Why coronavirus may forever change the way we care within families

So, Australia got free childcare as part of the COVID-19 response - but only for a limited time. The fee waiver is only in place until the end of June, albeit with the possibility of an extension.

What do Australians think about this?

New survey data, collected by The Policy Lab at Melbourne University and Sydney University’s United States Studies Centre, shows many - though not all - Australians want childcare to remain free. And not have this historic advance undone in our post-COVID recovery.

Until COVID-19, the Australian government offered means-tested support for childcare, as long as parents met a work or “activity” test.

But while some lower-income households were eligible for a subsidy worth up to 85% of their fees, families were still left with hefty bills.

A recent Mitchell Institute report found some parents are spending more on daycare fees than they would on private schooling, while there are continued media reports of mothers not taking extra days of work because they can’t afford the care.

Even though the federal government has been spending about $2 billion a quarter in childcare fee support, Australia does not rank highly in world terms.

According to the OECD, Australia places 17th in the world for education spending on three to five-year-olds, rates more similar to Latvia than New Zealand.

Among this, we also have repeated warnings that the amount of unpaid domestic work women do is unsustainable.

Mothers do almost twice as much housework as fathers, even when they are earning most of the family income.

And this comes at the expense of their time in employment, leisure and sleep.

So, women are suffering and the solutions offered are individually based: to reduce work, job share, drink green juices, meditate.

In early April, the Morrison government announced childcare would become free for about one million families, at a cost of about $1.6 billion over three months.

The reasons behind this were complex.

As the pandemic hit, parents began to withdraw their children from care and panicked services warned they might have to close.

There was also a recognition that childcare needed to stay open as part of our pandemic response. There was a tacit recognition for the value of women’s work in this - women make up nearly 80% of health care and social assistance workers.

It took a global pandemic to see women’s work for what it is: economically valuable.

What Australians think about free childcare

To understand how COVID-19 was influencing the Australian public, we surveyed Australians last week on their family lives.

Using the YouGov online panel, which includes Australians from a range of backgrounds, we asked more than 1,000 Australians about their support for free childcare.

More than 50% of mothers (of children of all ages) who responded agreed with the statement “the federal government should provide free childcare for all citizens to make childcare affordable”. A quarter of mothers replied they were neutral, while 22% disagreed.

When it came to all parents (of children of all ages), just under half (49%) agreed childcare should be free, with 25% neutral and 25% disagreeing. The results were similar again for all respondents (both parents and non-parents), with 48% agreeing to free childcare, 24% neutral and 28% disagreeing.

Our data indicates that the majority of Australians (72%) are, at the very least, not hostile to offering free childcare to all families, regardless of whether they themselves have small children in the home.

This is an important shift, given Australia’s political rhetoric has focused on subsidised childcare for some but not all families.

Australians appear open to maintaining this benefit for all young families to ensure they can afford it. This provision will be essential to getting mothers back into employment as states reopen after lockdown.

The future of free childcare

So, what does this mean for the Australian government’s childcare provisions that are expected to end when the economy stabilises? 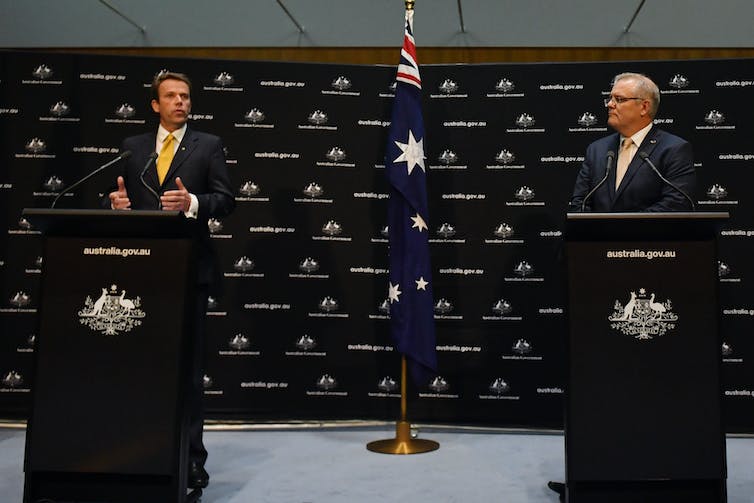 The Australian government has taken historic steps to provide free childcare to families, who were already under pressure.

For some families, free childcare has produced an economic boon, expanding their bank accounts. This money will be essential as society opens back up and consumer confidence is necessary to keep the economic engines powered.

For others, free childcare provisions will become increasingly important for keeping families out of poverty.

We know women’s employment has taken a harder hit during COVID-19 than men’s.

Keeping this policy intact is essential to helping women get back to work and getting Australia closer to its goal of reducing the gender workforce participation gap.

Read more: Permanently raising the Child Care Subsidy is an economic opportunity too good to miss

Importantly, it will allow women the space to re-skill as female dominated jobs, especially those in the retail, accommodation and food services, are slow to re-open or disappear altogether.

There is no doubt that free childcare is expensive.

But universal, free access should be a no-brainer for policy makers looking at the shape of our post-COVID society.

For the sake of equality, we can’t afford not to.

Authors: Leah Ruppanner, Associate Professor in Sociology and Co-Director of The Policy Lab, University of Melbourne