Even before COVID-19, young Australians were doing it hard in the labour market.

Slower economic growth and the increasing employment of older Australians since the global financial crisis had been crowding them out.

In recent research Michael Coelli and I estimate that crowding out reduced the proportion of young Australians aged 15 to 24 years in employment by 4 to 5 percentage points since the global financial crisis.

As a result, more young people have become long-term unemployed or have had to gain full-time work through part-time work. And many of those who have found work have needed to spend extra time and resources (doing things such as unpaid internships) to get it.

Now, young Australians are going to be hardest hit by the COVID-19 recession.

Partly this is because the young are always hardest hit during economic downturns – needing to make the transition from education to work at a time when there are few new jobs on offer.

Young Australians are still reeling from the GFC

Look at what happened after the global financial crisis.

The chart below uses data from the Household, Income and Labour Dynamics in Australia survey to show changes in employment to population ratios over time compared to 2008, which was the start of the global financial crisis.

The proportion of the population aged 25 to 54 years in employment fell for several years before bouncing back.

But the decline in the proportion of young who were employed was much larger – almost double the size – and took longer to reverse. 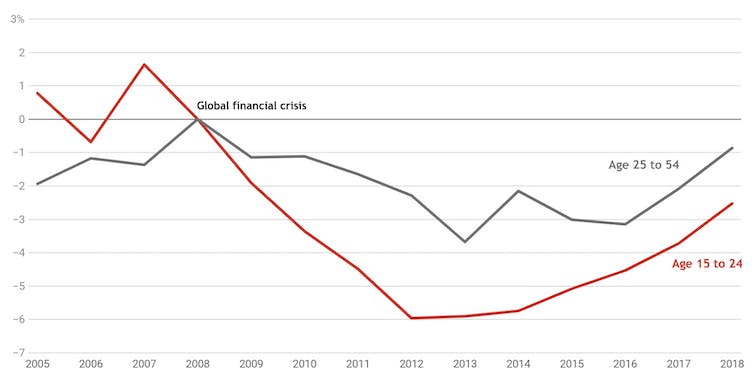 Percentage change from ratio in 2008. HILDA

COVID-19 should be worse

This crisis brings brings with it extra reasons to believe young will be hard hit.

First, a sizable group of older workers are likely to delay retirement to rebuild their superannuation balances. This will make it even harder for young jobseekers to find jobs.

Second, the young account for a disproportionate share of workers in industries being most affected by COVID-19 shutdowns, such as hospitality and retail trade.

Third, the young are also a large proportion of casual employees who have been in their jobs for less than 12 months.

That means they will not be eligible for the JobKeeper payment, making them more likely to be laid off and less likely to be rehired than workers who are.

Worryingly, the disadvantaged young are likely to be the hardest hit of all.

To see this, we can again draw on experience from the financial crisis.

The chart below presents the same information on changes in the employment/population ratio as the chart above – this time for groups within the 20 to 24 age group.

Those with bachelor’s degrees were largely unaffected.

Those who were in full-time study at the time suffered a drop in employment, but recovered after a decade.

But those not in full-time study and who do not have a bachelor’s degree saw a massive fall in their likelihood of employment of 11 percentage points, which has only partly been reversed. 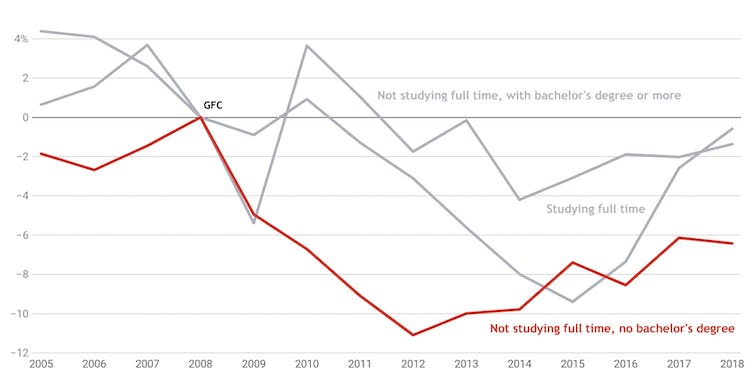 Percentage change from ratio in 2008. HILDA

Why should we worry about the impact on the young?

We should worry about the impact on the young because it matters for equity today, but also for the long-term consequences.

Many international studies have shown that trying to move into employment during a major economic downturn cuts the probability of employment and future earnings for a decade or more.

Why this occurs is less well-established. Reasons suggested include being forced to take lower quality jobs, losing skills and losing psychological well being.

Read more: What we missed while we looked away -- the growth of long‐term unemployment

The best way to improve the outlook for young Australians is to get back to high rates of job creation as quickly as possible. It is what the government is trying to achieve by keeping jobs open through JobKeeper and other initiatives.

In the meantime, there is a pressing case for programs targeted at the young to improve their prospects of employment when the economy recovers.

Priority should be given to the low skilled and long-term unemployed.

Recommendations made by the Employment Services Expert Advisory Panel on enhanced services to assist job seekers with high barriers to employment would be a good place to start.

New graduates are in great danger

Something also needs to be done for the many young people who will graduate over the next 12 months.

To prevent them having a spell of unemployment, they could be encouraged to undertake further study - with a holiday from Higher Education Loans Scheme loans and free TAFE courses for 2021.

Allowing young people to build and maintain contact with the labour market through scaled-up and government-funded paid internship programs would be a further valuable step, although its implementation would need to be timed to match the economic recovery.