Once upon a time when something was simple to do we said: “It’s as easy as riding a bike.” But switching from driving a car to riding a bike as one’s main means of transport is anything but easy.

The well-documented obstacles holding people back from cycling include a lack of proper bike lanes, secure parking arrangements, end-of-trip facilities and bike-friendly public transport, as well as lack of convenient storage space.

Despite these obstacles, people continue to try to make cycling a central part of their lives, with varying degrees of success.

While we know broadly what the impediments are, we don’t know how individuals confront them over time. We tend to approach this issue as an “all or nothing” affair – either people cycle or they don’t. Research is often framed in terms of cyclists and non-cyclists.

But, for most people, our research tells us it is a gradual process of transformation, with setbacks as well as small victories. The hesitant maybe-cyclist of today is potentially the fully committed cyclist of tomorrow. Unfortunately, the reverse is also true.

We have taken a lead from research into smoking, which sees failed quit attempts not as failures but as necessary steps on the road to success. Part of our research is interested in the faltering starts people make in transitioning from motor vehicles to bikes. Our aim is to help identify new intervention points for cycling policy.

Where the bike is kept is telling

Our question is: how can we fail better? Building on research with 58 cyclists in the Wollongong region, we recently shifted our emphasis to another local government area, the City of Sydney.

We focused on people who want to cycle but have mostly failed so far. We carried out in-depth qualitative interviews with 12 participants, following up each with a go-along, where participants guide us through their regular travel routes.

To date, all participants convey good intentions to incorporate cycling into their lives. All say they want to resume cycling, yet none have succeeded. 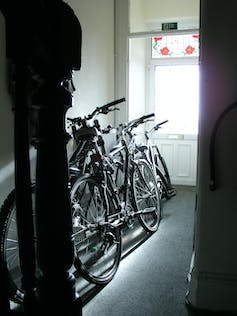 These bikes near the front door of a student share house are almost certainly ridden often. cbamber85/Flickr, CC BY

Their attempts were inhibited by commonplace issues: lost confidence in their abilities, less enjoyment of cycling because of congestion, and experiences of a car accident or a near miss.

Our research has found that where bicycles are stored is a reliable indicator of the changing value of the bicycle in an individual’s everyday life. One can pinpoint where someone is in the course of their starting-to-cycle journey by locating where their bike is kept.

When things are going well the bike is near the front door ready for immediate use. As things get difficult, the bike migrates from the front to the back of the house, to languish in a spare room or the shed, before finally being put out on the curb as hard rubbish (or for “freecycling”).

Read more: People take to their bikes when we make it safer and easier for them

Storage is a key obstacle

Contrary to interpretations of data indicating inner-city residents are the most likely to cycle, we have found participants who live in small, inner-city dwellings face daunting storage issues that all too often defeat them. They have told us about storing the bicycle inconveniently inside the house, wedged in dining rooms, hallways and bedrooms.

The search for a place to store the bike increased the inconvenience of using it for transport until finally the bike was locked away, kept only as a sign of ongoing intention and hope. This inconvenience defeats successive start attempts before they’re seriously able to be revived. 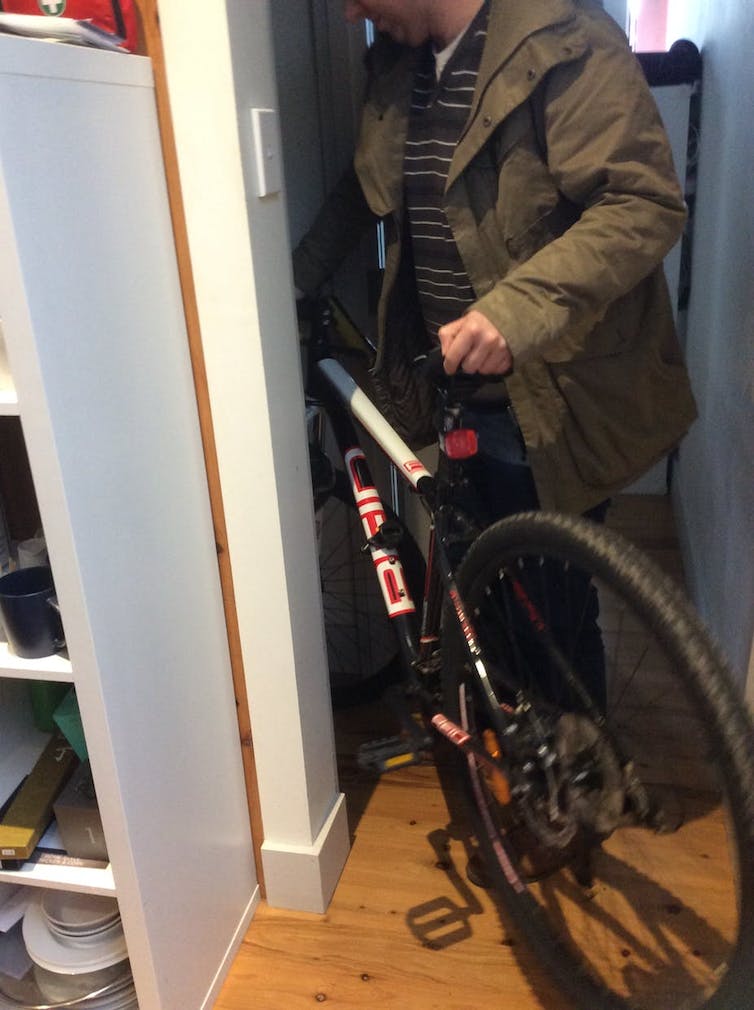 Lack of convenient storage is a serious obstacle to becoming a regular bike rider. Author provided

For example, Greg (37) confirms the “pain” of poor storage options discourages him from riding more regularly:

So it’s called the room under the stairs, according to the real estate agent. I don’t know how … And that’s partly the pain of taking it out. I would take it out more often, but every time I have to take it out I have to delicately wheel it here where you are. And sometimes scratch the wall, and then out through the door and gate … I would keep it outside, but my partner won’t let me because he thinks it will be stolen. I would ride more if it was just there, and I’d hop on and off.“

The languishing bike prompts us to ask questions about the urban design of convenience. It’s a key element of any active transport policy that aims to promote cycling and walking.

Something as simple as lockable bike hangars on residential streets might liberate intentions into actions. Such facilities would be everyday visual reminders to cycle and an added symbol that cars are not the only way of occupying roads. 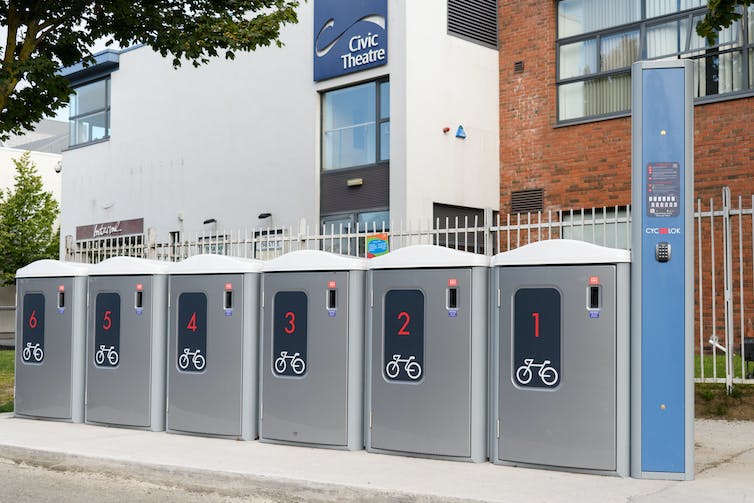 Bicycle lockers on the street, like these ones in Dublin, Ireland, are a visible sign of a cycle-friendly culture. Arnieby/Shutterstock

Read more: Cycling and walking are short-changed when it comes to transport funding in Australia

We invite others who have started this journey to share and celebrate their stories of failing better, particularly those in the City of Sydney, by participating in our research.