Anyone who has ever worked as a journalist knows the work tends to accentuate the negative. (“If it bleeds it leads”.) To counteract this, I’d like to end the week by highlighting two pieces of very encouraging news.

For the first time in my memory the Australian media has been truly united behind a campaign to fight back against increasing government encroachment on press freedom. It would be easy to be cynical about the redacted newspaper front pages that appeared on Monday as part of the #righttoknow campaign.

Arguments about the importance of the media to democracy are simple to dismiss as special pleading from an industry whose flaws and limitations are all too glaringly obvious, all too often.

At times this has been the approach of the prime minister, Scott Morrison, who likes to point out that no one is above the law, journalists included. Writing in The Daily Telegraph Peter Greste did a terrific job of calling out this misdirection.

Journalists aren’t asking to be above the law, they are seeking laws that better enable them to do their job of protecting whistleblowers while uncovering wrongdoing in the public interest. This isn’t a case of self-interest or special pleading so much as a legitimate attempt to create a better system for everyone. We’re a long way from seeing real change, but the progress so far is especially heartening. 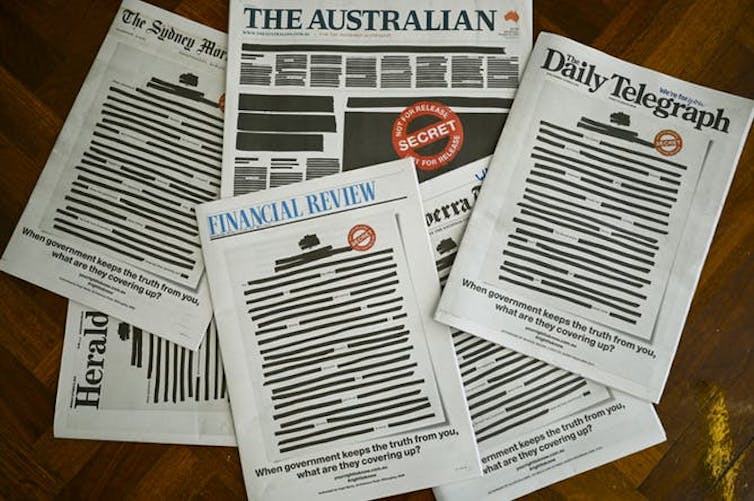 On Monday many Australian newspapers redacted their front pages to support the #righttoknow campaign. Lukas Coch/AAP

The other piece of positive news also relates to trust. The Australian National University’s 29th ANU poll released this week and reported by Michelle Grattan, showed trust in journalists is low at 20%. But trust in universities was 78.8%, dwarfing major companies, the public service and the federal government.

This is hugely significant. At a time of declining trust, our universities are seen as a reliable source of independent expertise. By working only with academics who are experts in their area, and sharing their work with the general public, The Conversation is drawing on this expertise and a deep well of trust.

Like our colleagues at News Corporation or Nine or the ABC or the Guardian, we are seeking to serve the public interest by making information available to inform democracy and help people make better decisions in their lives.

And The Conversation is succeeding in ways we could never have imagined when we set out on this journey nine years ago. We are now operating in Africa, UK, US, Canada, New Zealand, Spain, Indonesia, and France. In Australia we had an audience of 5.2 million unique users onsite last month. When you include republication under creative commons our reach is growing and vast.

Although our approach to journalism is unique, The Conversation Australia shares the goal of a better informed public with all Australian journalists. And that’s why we applaud the outbreak of unity, and are heading into the weekend a little more hopeful than we were at the start of the week.