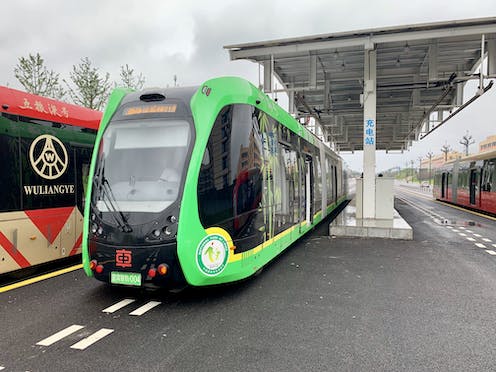 A Greenpeace video of me plugging a trackless tram that went viral with 4 million hits has caused a few eyebrows to be raised over whether I think light rail is dead. So let me be clear: light rail remains the gold-standard technology for providing high-quality, rapid, zero-emissions public transport along a street corridor.

There is a strong case for using light rail in many cities with sustained all-day ridership. This includes Sydney, where trials of a newly built light rail system have begun.

Read more: Why Gold Coast light rail was worth it (it's about more than patronage)

So why am I promoting trackless trams? My interest is in cities and places that lack the population density or capital funding necessary for light rail (or heavy rail). Just because you live in Hobart, Liverpool or Fremantle doesn’t mean you aren’t entitled to something that is “more than a bus” for your daily commute.

How can we provide those communities with the same quality of public transport as light rail provides? Trackless trams may be an option that can help urbanism flourish around stations along corridors limited until now to cars or buses.

This research interest took me to the world’s largest manufacturer of railway stock, CRRC, in Zhuzhou, China. CRRC has produced Autonomous Rail Rapid Transit (ART), or what I call the trackless tram.

The trackless tram seeks to replicate the light rail experience. The differences are that optical guidance systems replace rails, with rubber tyres on railway-type bogeys replacing steel wheels. Many of the track-laying and utility relocation costs of light rail construction can be avoided.

The capital cost of Sydney’s light rail has risen to around A$210 million per kilometre. For a fraction of that cost, as little as A$4m/km, trackless trams can be introduced very quickly on a road of acceptable quality. Traffic engineers advise us good-quality road base is sufficient.

The first, four-stop trial began in Zhuzhou in 2017. Trackless trams have since been launched in Yongxiu and Yibin.

The trackless tram is attracting interest from cities worldwide. Trials have begun in Qatar in advance of the 2022 FIFA World Cup.

Qatar is the latest site of trackless tram trials.

I am leading a team at Curtin University to investigate how various levels of government in Australia (and New Zealand) can support trialling and testing of this technology and, if appropriate, introduce it in a controlled way. We have been approached to help cities in Africa, Europe, Asia, the US, Australia and New Zealand.

Among other things we need to be sure the technology is reliable, provides the promised level of service, doesn’t damage road surfaces and complies with regulations required for safety and sustainability.

We also need to be certain construction and long-term operations can produce the promised cost savings. Not all public transport innovations, such as bus rapid transit, have lived up to their promise.

Some people are concerned the trackless tram might be a stalking horse for ideological opponents of light rail who wish to reduce investment in public transport.

In my case, I would point to my record in attracting rail investment in Perth. I started the Friends of the Railways 40 years ago to save our train. We now have a system where at the last Western Australian state election money was taken from the Roe 8 freeway proposal and put into the MetroNet heavy rail package.

Both technologies are likely to play complementary roles. In Sydney, for example, light rail makes sense for Parramatta into the city. The trackless tram may stack up for lower-density areas such as connecting Liverpool to the new Western Sydney International Airport.

Read more: Western Sydney Aerotropolis won't build itself – a lot is riding on what governments do

In Perth, we certainly need such a service in many inner and middle suburbs, or for connecting major outer suburban centres to the new MetroNet lines.

Smaller and less well-off communities as well as outer suburbs are now in focus for the trackless tram. A lack of public transport means these areas have a reliance on private car use which is now not acceptable.

To avoid greenwashing, and ensure we remain on a pathway to sustainability, we need a strategy underpinned by a thorough understanding of the technology. The aim is to achieve high-quality, zero-emissions, reliable and affordable public transport that can help reshape our cities.

The tram once ruled our cities as the preferred public transport mode from the 1890s to the 1940s. Through a calculated campaign trams were denigrated in favour of the bus and car. Cities around the world tore up their tram tracks.

Read more: Kyoto has many things to celebrate, but losing its trams isn't one of them

Not every old tram route can have a new light rail. The trackless tram presents an opportunity to rebuild high-quality public transport along major road corridors and connect suburbs with poor linkages. I would hope for a more sophisticated approach to planning transport networks, recognising that both light rail and trackless trams could play important roles.