Art is universal – it is a great educator and a bridge between cultures, religion and time. Now, more than ever, it is vitally important for Australian collecting institutions to embrace the art and culture of the Islamic world, to encourage understanding and respect within our own country.

Nearly 15 years later, following a string of mostly modest exhibitions towards this aim, AGSA presents its most expansive and ambitious exhibition of Islamic art yet: No god but God: The art of Islam.

Usually, objects from AGSA’s Islamic art collection are displayed in a single small hall nestled between European and Asian art and rotated relatively infrequently so only a few highlights are ever seen. In No god but God, curator James Bennett has taken over adjacent halls in a magnificently broad exploration of objects produced from one side of the Islamic world to the other and spanning over 1,000 years. 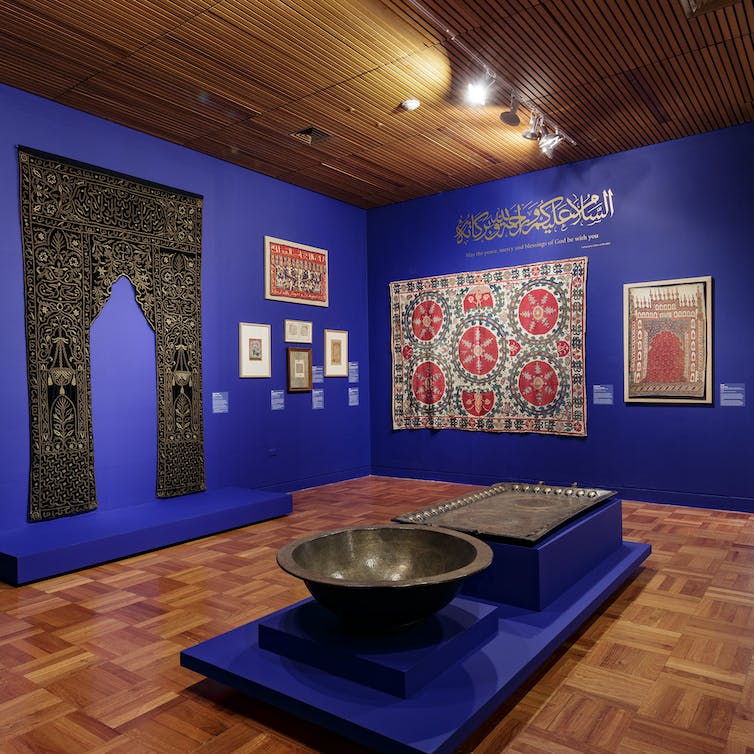 In a subtle evocation of Islamic architecture, the four gallery spaces are connected by portals fashioned into pointed arches. Inside, cobalt walls and soft lighting create a meditative atmosphere, enhanced by a melodic recitation of the Quran and devotional music.

Each space is loosely devoted to the major accepted tenets of Islamic art: endlessly expandable patterns representing the infinity of God; flowers evoking gardens of Paradise; calligraphy expressing the word of God; and the depiction of human and animal figures – contrary to popular belief, these are common in secular contexts, but avoided in religious contexts.

The title references the most basic principle of Islam: the declaration of faith in the one God. As a rule, objects of Islamic art – even those with mundane utilitarian functions – are highly decorated in a demonstration of religious exaltation (according to the Prophet Muhammad, “God is beautiful and He loves beauty”).

There are masterpieces on display here, breathtaking in their craftsmanship. 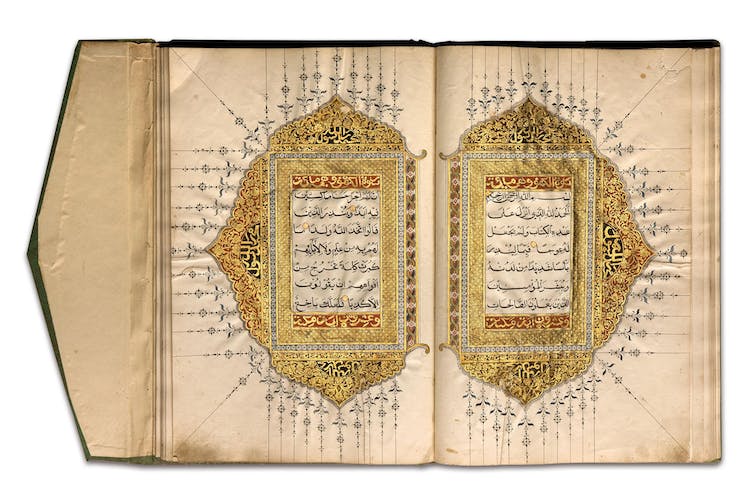 A small Quran from Indonesia at the turn of the 20th century evokes awe in the precision of the calligrapher’s pen in the measured and level script and the intricately gilded, minutely detailed floral and geometric patterns filling the pages’ frames.

From Morocco, a pair of 19th century doors are covered in interlaced geometric patterns, evidence of Muslim artisans’ mastery of complex mathematical concepts. Banal in their everyday function, their striking ornamentation commands notice.

On a ceramic bowl from 14th century Iran, a dynamic school of fish is painted swimming just out of reach beneath the cool, teal surface. 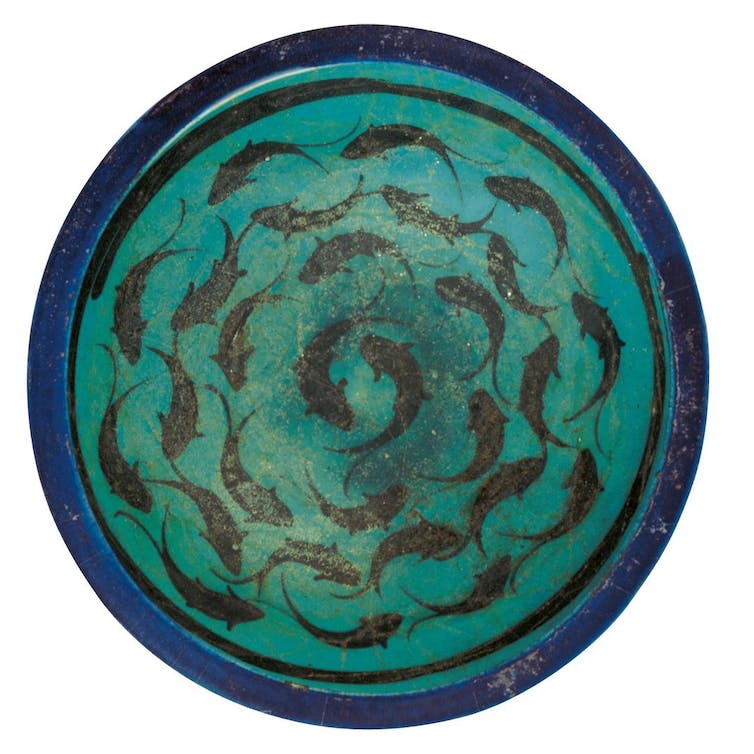 Just as important as the objects are the labels. Extended text appears next to most objects. It is enlightening, imparting insight into original function and significance, historical context, and meanings that might be derived from their artistic content.

The sensitivity and thought Bennett has given to the labels shows a deep respect for visitors’ interest in learning more about the Islamic world.

Read more: Islamic art at the National Museum is spectacular, but misses opportunities to bridge a cultural gap

In preempting visitor questions, he doesn’t leave them hanging, hoping but struggling to learn more. And by giving a glimpse into the lives of these objects and their roles in the lives of the people who used them, he humanises Muslim people.

Despite having their own sets of rituals, traditions and understanding of the world, this is a diverse group who share with everyone the same basic human wants and needs: a place among family, esteem and recognition in public life, and enjoyment of food, drink, and – above all – beauty.

This is important. As AGSA’s former director pointed out, art has a role to play beyond the merely aesthetic. For Islamic art, this role is inherently political. After the tragedy of September 11, Islam and its adherents have been under scrutiny in an ever-brighter spotlight.

Islamophobia is rife in Australia. Attacks on members of Australian Muslim communities have increased. In 2017, 25% of Australians had negative views of Muslims.

Through the display and sensitive curation of Islamic art, galleries have the opportunity to change the dominant rhetoric and counter prevailing, damaging myths.

Many hold the idea Islam is monolithic: all Muslims are from the Middle East, look the same, and hold the same interpretations of their religion with the same fortitude.

Displays of Islamic art such as this quickly expose the lie in this presumption: Muslim people historically formed large communities from Spain to Indonesia, their religious practice as varied as the countries they inhabit.

Many believe there is no place for tolerance of others in Islam, either in the present day or in history. Countless objects can show this to be false, evidencing peaceful coexistence of people with different beliefs.

On display in this exhibition is a tile from 19th century Iran depicting Jesus crucified, surrounded by the Twelve Apostles. In Islamic understanding, Jesus was a prophet, granted the same respect as Muhammad, but did not die on the cross. This is evidently a tile made for or by the Christian community in Persia under Islamic rule.

Myth-breaking is important for the Muslim community as well. The multitudes of human and animal figures in art produced by or for Muslims show this depiction was acceptable for a long period of history. 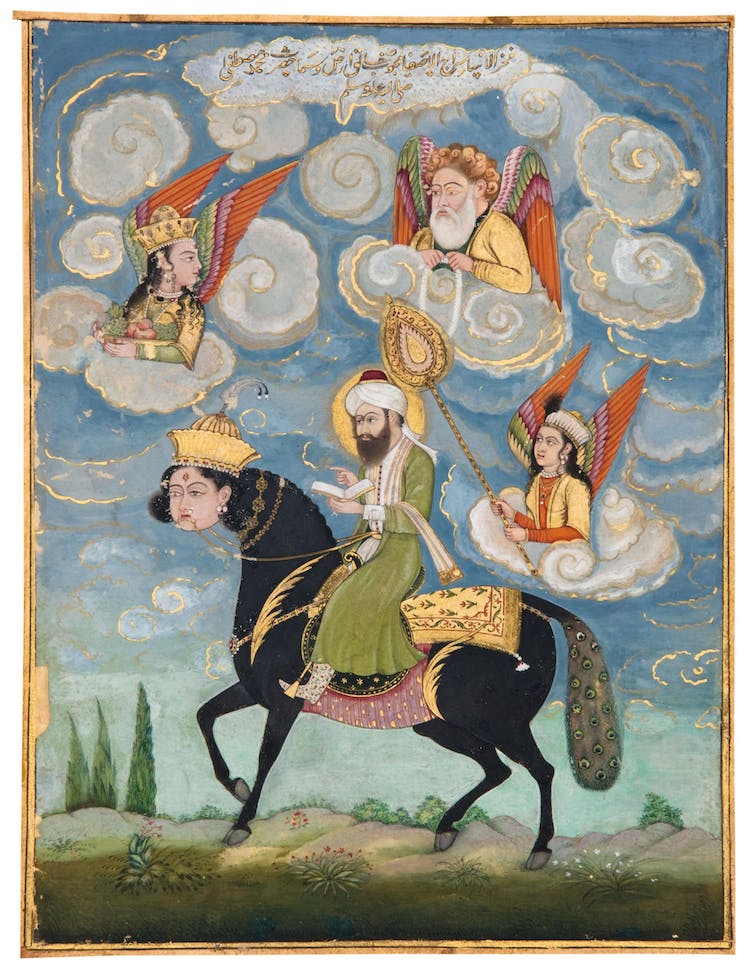 Portraits of the Prophet Muhammad are widely believed to be forbidden, but are actually part of a rich historical tradition. India, Portrait of the Prophet Muhammad riding the Buraq, 1820-30, Lucknow, Uttar Pradesh, or Dehli, India, opaque watercolour and gold on paper, 17.7 x 10.9 x 6.6 cm; Gift of Barrie and Judith Heaven 2009, Art Gallery of South Australia, Adelaide

Most striking is a 17th century illuminated manuscript folio on display featuring a depiction of the Prophet Muhammad. Widely believed to be forbidden across the modern Islamic world, this object is representative of a rich historical tradition.

Read more: Why there's opposition to images of Muhammad

While some institutions have shied away from showing objects like this, this is not the first time it has been displayed in this gallery.

“Islamic art” is used as shorthand to describe objects produced across parts of the world where Islam was a dominant religion, even if they were created by or for non-Muslims. Aesthetic styles are influenced by religious teachings and local cultural tastes.

Although “Islamic” suggests art was principally religious, many objects had utilitarian functions, more to do with everyday life than religious context.

Objects of Islamic art generally have an aesthetic value transcending cultural understanding, their motifs harmonious, recognisable and even common in our globalised world today.

In 2015, Sam Bowker wrote for The Conversation Islamic art tends to be invisible and inaccessible in Australia. To this day, Islamic art is rarely seen outside Adelaide.

Particularly remarkable in this show is the number of objects that are either new donations from private collectors around Australia or on loan from them.

Islamic art is not a strong point of Australian collecting institutions, and, as Bowker notes, exorbitant market prices of Islamic art objects render it impossible to begin large collections now.

This community of private collectors is a significant resource that could be harnessed to bring Islamic art out of the shadows. 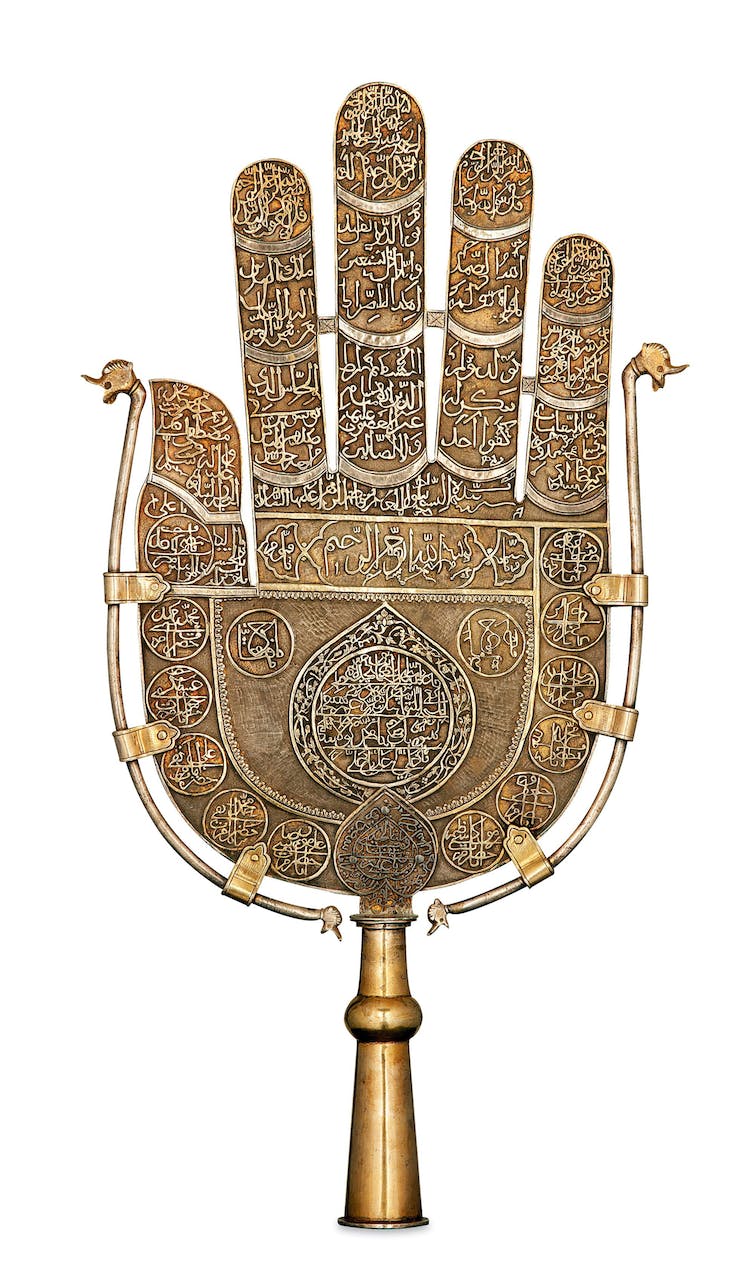 The display of Islamic art in Australia gives us opportunities for learning and understanding. India, Religious standard (alam), in the form of the Hand of Fatima , 18th century, Deccan Region, India, gilt silver, 63.0 x 33.0 cm; Gift of Geoffrey Hackett-Jones in memory of his brother Frank through the Art Gallery of South Australia Foundation 2007

Art by itself may not be the solution to all social ills, but the display of Islamic art creates opportunities for learning and cross-cultural understanding where few currently exist.

In response to Islamophobia on our streets and in our media, collecting institutions have a duty to show a counter-narrative based on historical evidence.

Constructive interpretation and the facilitation of dialogue is critical. Australian galleries should put historical Islamic art on display for the advantage of all.

No god but God shows how it should be done.