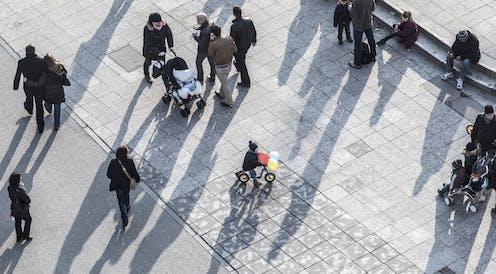 There’s a difference between a road and a street. Roads take you from one place to another, but streets are more than functional channels. They are public spaces.

The streets of downtown Auckland, New Zealand’s largest city, are about to be transformed. A masterplan for the city centre was approved back in 2012, and now a proposed design is open for feedback.

The idea behind this masterplan is to design the central city as a cohesive public space rather than simply the sum of a thousand independent decisions.

The design will include further changes in support of walking, cycling and public transport, and less space for cars. Significantly, sections of Queen Street, which runs through the centre to the waterfront, may be closed to cars completely.

We can expect to see outraged responses from those wedded to their cars, those who see the project as an expensive beautification scheme, and those who resent the idea of Auckland’s population intensifying.

This is a good time to reflect on what we mean by “public space” and what we need it for.

Streets are some of our most important public spaces, but are often managed as if they were mainly pipes for cars (or, if we’re lucky, bicycles and pedestrians). Roadways, water pipes, optical fibres and pedestrian walkways are “bundled” together.

Because it is relatively easy to assign metrics to these flows, it is easy to think of streets as technological problems. The implicit ideal is for a city to be a “sleek, efficient machine” with a “rationalised circulatory network”, as architectural historian Spiro Kostof put it. The idea is at least as old as Baron Haussmann’s 19th century rebuilding of Paris.

How to define public space

Philosopher Hannah Arendt wrote of public space as a “space of appearance”, a place where we can become meaningfully visible to one another, and where we can present ourselves on our own terms, not as data points, customers, stereotypes or debating partners.

As social theorist Michael Warner put it, “a public is a relation among strangers”. To be in public, I have to negotiate my relationship with strangers, and recognise that I am also a stranger.

Arendt believed that democracy itself could be understood as a project for public space, the creation of a shared world. Māori, New Zealand’s first people, have also long thought of our shared world as a place of connections.

In other words, there is more at stake with the council’s plan than pleasant streetscapes or well-engineered infrastructure. To make Auckland’s streets good public space, I offer five suggestions:

It helps us make sense of our relationships, and supports our self-determination. It should be a platform on which we can all build, something like the old concept of the commons. Public space is filled with people pursuing various goals, individually and collectively, according to various value systems and ways of living. To imagine new kinds of public space is to imagine new ways to enable people.

Streets, unlike roads, are not just spaces to move through, but places to do things. The famous American urban activist Jane Jacobs famously pointed to the significance of children playing in the street, and the importance of minor interactions like holding a neighbour’s mail, or leaving a key for someone at the corner store.

Similarly, the iconoclastic theorist of human-centred design Christopher Alexander even suggested that a marker of healthy public space is people feeling comfortable enough to take naps there. Informal uses of space like this should be maximised. Public space should be a bit of a mess, not a perfectly optimised machine.

Streets are places for people to gather. The Arab Spring uprisings of 2010-11, the subsequent Occupy movement, ongoing protests in Hong Kong, and Auckland’s own land occupation at Ihūmatao, may have been coordinated on social media, but were ultimately powered by the physical presence of people in public space.

Public spaces are stages where collective identities can be expressed. If we want places where people can appear authentically as themselves, we also need to recognise public space hosts difference, disagreement and potentially conflict.

It might seem efficient to treat roads, plumbing, architecture, gardens, community events, public art, planning rules, maintenance, commerce and so on as separate domains best handled by experts in each area. Detailed expertise is essential, but to design good public space we need to join the dots. This isn’t easy.

In recent years, Auckland Transport, nominally a council-controlled organisation, has asserted its independence, proposing its own plans that are in conflict with the council’s aims. We need to dissolve silos, get more people around the table, and maintain a clear focus on who and what our public spaces are for.

Public space doesn’t just happen. Arendt told us to see it as an ongoing labour, something to achieve together, not something that exists by default. Auckland’s masterplan is a step in the right direction but good public space needs public involvement.

Public consultation can be a fraught process. Typically, only a few people respond, and they are disproportionately older, wealthier and white. The council has a duty to seek public input. We as the public have a responsibility to make ourselves heard.