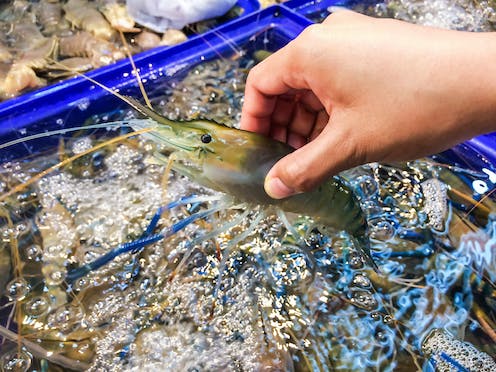 The giant freshwater prawn is native to the Indo-West Pacific from northwest India to Vietnam, Philippines, New Guinea and northern Australia. It has been introduced into many countries for aquaculture.https://www.shutterstock.com

The creation of all-male or all-female groups of animals, known as monosex populations, has become a potentially useful...

The creation of all-male or all-female groups of animals, known as monosex populations, has become a potentially useful approach in aquaculture and livestock rearing.

Researchers and those in the produce industries are interested in how we can take advantage of the natural traits exhibited by a certain gender in a species.

On the other hand, monosex culturing is already common practice for some aquatic species. In fish species such as tilapia and catfish, males grow faster, whereas in other species such as grass carp and salmon, females do. Creating monosex populations of the faster-growing gender increases production rate.

As the science develops, I and my colleagues in this field continue to find ways in which monosex animal populations can benefit humans.

Superfood, but not as you know it

During my PhD at Ben-Gurion University I developed the molecular tools required for commercial-scale production of monosex populations in the giant freshwater prawn, Macrobrachium rosenbergii. This technology is now marketed and distributed by several companies across the globe.

Enzootic is one of the companies using this technology on a commercial scale.

Besides being a commercially important species, the giant freshwater prawn has a fascinating social hierarchy. Males compete for reproductive success using different growth strategies and develop into either small or large subordinate males, or large dominant males.

While some of the dominant males grow much larger than females, they suppress the overall growth and survival of the entire population. It’s therefore advantageous to produce only females.

All-female groups use feed more efficiently, have a greater survival rate (even at a much higher stocking density), and are more uniform because there’s no unwanted breeding; the genetic breeding program is highly controlled.

When unplanned breeding occurs it results in crowding and leads to wasted energy due to sexual activity at the expense of growth. In controlled breeding, the mating is done only in specified breeding tanks, whereas prawns in the other tanks invest only in growth.

These monosex prawn populations were recently trialled in western African countries as a potential biological control of schistomiasis.

This deadly disease is caused by parasitic flatworms in freshwater snails. The snails are a delicacy to giant freshwater prawns, meaning the prawns can break the deadly parasite’s life cycle.

Introducing monosex populations of these prawns to areas where they are not native is also ecologically safe. They will not reproduce unchecked and can’t establish the next generation of prawns. Even if leakage should occur into natural waterways, it wouldn’t be viable for more than one generation.

The fact that they’re a prized food commodity also means they can help sustain villages wanting to produce and sell them.

This is done using a male-specific organ called the androgenic gland. When cells of this gland are inserted into females at an early stage (when they are about the size of a rice grain), they develop into males.

Using the genetic sex markers I developed, researchers have established these altered “males” carry a female sex chromosome, making them neo-males. When neo-males are mated with females, they produce a population of about 25% “super-females”.

The challenge with monosex populations of the giant freshwater prawn and other species is that it results in the genetic narrowing of population diversity. Diversity is crucial to combating disease in cultured populations and is a huge concern for aquaculture species.

To circumvent this issue, researchers are developing breeding programs to reinvigorate the genetic lines treated with this technology.

In other species of crustaceans we are yet to figure out how to manipulate gender the same way it can be done in M. rosenbergii. The crustacean research community, myself included, is working diligently to develop similar technologies for other species such as crabs and lobsters.

The great paradox of sex determination and making monosex populations is that while the outcome is the same across animals (separate sexes), the way these are produced varies greatly, even between closely related species. This makes it a complicated task to unravel the underlying machinery for different species.

And so the quest continues.