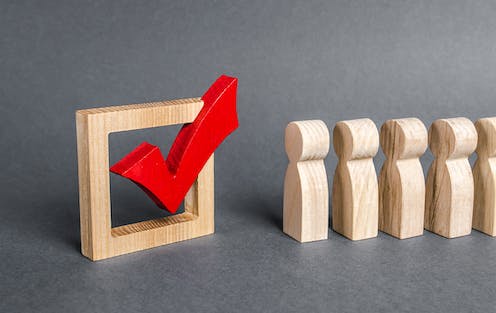 Rather than encouraging people to become better citizens, rewards and fines can actually reduce peoples’ natural tendencies to do the right thing by others.from www.shutterstock.com, CC BY-ND

Last week, voter enrolment for the 2019 local government elections closed in New Zealand and concerns about low voter turnout resurfaced. During a panel...

Last week, voter enrolment for the 2019 local government elections closed in New Zealand and concerns about low voter turnout resurfaced. During a panel discussion run by Auckland Council, the idea was raised to pay people to vote to encourage participation.

The concerns about low voter turnout are well founded. Voting rates in local government elections have been falling for at least 30 years and voter participation now rests around 40% – almost half that of general elections.

The idea that we should be paying people to cast their vote in New Zealand isn’t new. But the notion ignores the evidence that using explicit monetary incentives to induce pro-social behaviour can be counterproductive.

Read more: FactCheck Q&A: how unusual is compulsory voting, and do 90% of New Zealanders vote without it?

The suggestion to pay people to vote rests heavily on the assumption that people subscribe to the self-interested motivations of Homo economicus: the idea that people make decisions purely on extrinsic motivations often determined by financial incentives.

This type of thinking has guided political theorists and constitutional thinkers since the late 18th century; influencing policy and causing laws to be designed to induce people to act as if they were civic minded, rather than explicitly encouraging the cultivation of civic virtues.

But this approach to policy making ignores the fact that we frequently observe people making choices in the best interests of society, rather than solely on what might best financially benefit themselves. These decisions are understood to be guided by intrinsic motivations, as opposed to extrinsic motivations.

The crowding out paradox

The issue is that in situations where intrinsic motivations are ignored and substituted for market mechanisms, such as rewards or fines, we can “crowd out” intrinsic motivations. In other words, rather than enhancing pro-social behaviour, rewards and fines can actually reduce peoples’ natural tendencies to be good citizens.

Perhaps the most well known illustration of crowding out was a controlled behavioural experiment in Haifa, Israel, where parents who were late picking up their children at the end of the day were fined. Parents responded to the fine, but not as the daycare centres had hoped. Rather than encouraging cooperative behaviour the fine appeared to undermine the parents’ sense of personal obligation to avoid inconveniencing the teachers, and late pick-ups more than doubled.

In each of these cases, peoples’ natural tendencies to do good were crowded out by fines, bonuses or other incentives that put a price on their civic behaviour, and left them less inclined to act in a pro-social and generous way.

Voter turnout rates help to show how citizens feel about government, both in terms of their confidence in political institutions and whether their participation can make a difference. Because of this, the long-term trend in local government voter engagement should be raising red flags among decision makers in New Zealand.

So what to do? Although there is unlikely to be a panacea for increasing turnout, a mix of strategies that integrate structural reform with behavioural tools, such as requiring voters to opt out rather than opt in or offering “I voted” stickers, could offer incremental improvements. Likewise, investing in civic education could stimulate long-term changes in beliefs and norms, thereby increasing the scope of citizens’ intrinsic motivations and levels of voter engagement.

Read more: How lowering the voting age to 16 could save democracy

Whatever the strategies explored, policymakers need to be aware that fines, bonuses or other incentives have the potential to compromise peoples’ pre-existing civic values and intrinsic motivations. Subsequently, New Zealand decision makers need to take a comprehensive view of the things that motivate people to act when considering ways to increase voter engagement at the next election.