Even Scott Morrison, with his abundant self-belief, couldn’t have imagined that on Saturday’s first anniversary of his seizing the prime ministership, he’d be winging his way to France for a G7 meeting, where Australia has observer status for the first time.

A grim brand of luck – the spectacular collapse of two Liberal prime ministers – and a dash of cunning brought Morrison the top job. His own campaigning skills and a hapless Labor performance enabled him to keep it.

In the next three years, it might all go to hell in a handbasket, given an uncertain economy, a fickle electorate and a thin majority. But after 12 months in the position, Morrison looks the strong leader, clearly in charge, with few constraints.

It’s not just the election win. It’s that there isn’t the remotest sign of a trouble-making aspirant or a vengeful wrecker. New party rules protect a Liberal PM. Infighting has subsided. The party is generally satisfied with its leader, in a way it wasn’t with either Tony Abbott or Malcolm Turnbull.

Three months after the “miracle” victory, we’re seeing how the campaigning prime minister has morphed into the governing one, while remaining the campaigner.

To analyse Morrison’s ideology has always been to plunge into a puzzle box. He’s conservative on moral issues, driven by his Pentecostalism. On secular social issues he’s more moderate – some in the welfare sector found him unexpectedly flexible when he was social services minister. On economics, he can be soggy, lacking the true dry’s distaste for government intervention. 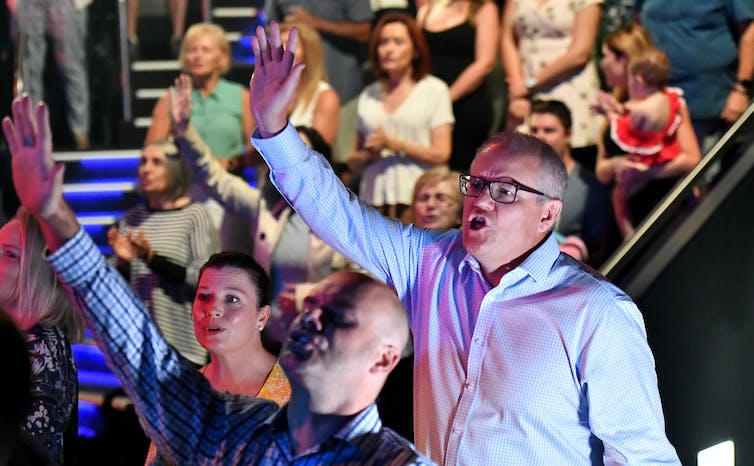 In the election, it was said Morrison looked like he was running for “mayor of Australia”. It’s an accurate characterisation in part.

The PM who’ll hobnob at the G7 and soon sup at a White House state dinner has his feet firmly planted in the local community centre, his ear tuned to his “quiet Australians”, the people he asserts are alienated because the “Canberra bubble” too often has ignored them.

We only have to observe what he’s done and how he talks. Setting up “Services Australia”. A pledge to bust “congestion” - in traffic, regulations, the bureaucracy. Badgering the public service to improve delivery. Moving to try to stop the export of plastic waste. An inquiry into the NDIS.

He dog-whistles to his “quiet Australians” - not in a racist way, but through deriding the “bubble”, and publicly putting the bureaucrats in their place.

Morrison likes the practical; he looks from the ground up. It’s all about Mr and Mrs Average from The Sutherland Shire. Indeed, that’s him and Jenny, although their address is Kirribilli House. After he became PM, Morrison moved very quickly to define himself to the public as one of them. When Sky’s David Speers asked about his image as “the daggy dad with the baseball cap”, Morrison said: “well that’s how it’s described by others, but you’re describing my life … it is who I am”.

Can he maintain the guise of separation from the Canberra elite, given he’s its most powerful member? Monash University political scientist Paul Strangio says “it will take political and image-making dexterity by the prime minister to sustain the idea that he is somehow distinct from that ‘bubble’”. 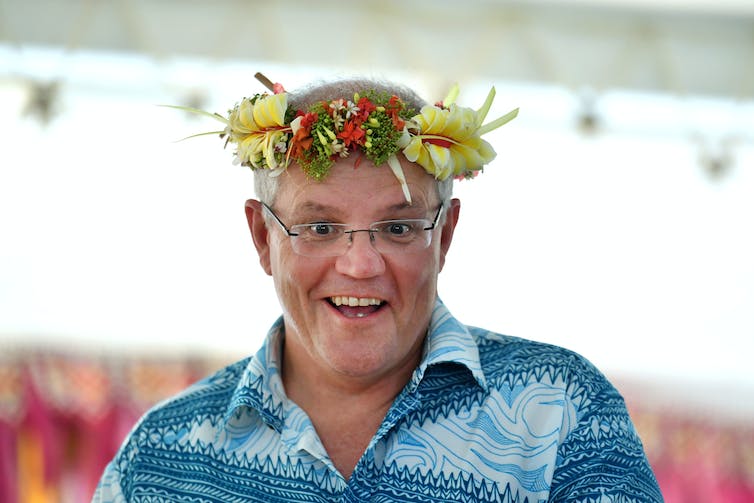 When asked about his image as ‘the daggy dad’, Morrison said ‘it is who I am’. Mick Tsikas/AAP

There’s been much claimed about Morrison’s lack of an “agenda” beyond the now-legislated tax cuts, but it’s notable that since the election he’s organised “deep dives” into policy areas.

He gets together the minister, public servants and interested or qualified backbenchers. The sessions run from one to four hours; Morrison stays through them. Topics have included recycling, youth suicide, veterans’ mental health, NDIS, water, aged care.

He’s also has reviews and inquiries in train or pending, with one on industrial relations, where he has signalled he’ll proceed cautiously. On the fraught area of religious freedom, still in the works, backbenchers have been extensively consulted, to smooth the path to decisions.

“Relative to his two predecessors, he has a much better idea of what he wants to do – he’s a better long-term planner than [they were]”, says someone familiar with all three of these Liberal PMs.

Former Liberal staffer David Gazard, a close personal friend, describes Morrison as a “pragmatic incrementalist – he will get what he can get in areas he wants to go to”. He’s fortunate that the post-election Senate is set to be easier than the last one.

The questions hang. Is the incrementalist capable of implementing major reforms that the country will need? Will he make a substantial entry in the history book of Australian prime ministers?

Given Morrison’s pragmatism, even his caution, his decision to put Indigenous constitutional recognition on his agenda sits oddly. It is becoming clear that, with his veto of any reference to a “Voice to Parliament” being put in a referendum question, the initiative is likely to fizzle into a disappointing stalemate.

Other issues are unavoidable but intractable. While the internal Liberal wars over climate and energy policy have quieted, the rifts remain. This is a self-imposed “wicked problem” for the Liberals - beyond, it seems, any leader to satisfactorily resolve - and the struggle with energy prices will continue.

Morrison is methodical, always political, perennially in action. “He would be the kind of person you’d expect to have a job list on his desk,” says a minister. “I think he’s conscious of the short time frame of the federal cycle. He’s task-oriented - he wants to get stuff done and move on to the next project”.

One source likens his work style to rugby league’s “playing moves in blocks,” proceeding systematically from thing to another. Another says he picks three or four things to drive, while putting others into “wider orbits”.

Morrison the family man has his nuclear political family. Frontbenchers in his innermost circle are Stuart Robert (Minister for Government Services and the NDIS) and Alex Hawke (Minister for International Development and the Pacific), both his factional mates from way back, as well as Ben Morton (Assistant Minister to the Prime Minister), who travelled on the campaign plane with him.

His chief of staff, John Kunkel, is a close confidant, as is Phil Gaetjens, his incoming departmental head, on whom he’ll lean heavily for advice on turning political objectives into policy outcomes.

Those who work with Morrison stress how focused he is. A close observer describes his responses to problems. “He doesn’t dwell too much on pondering the entrails. He says ‘how do we fix this?’ His temperament is his biggest asset – he’s unflappable. He’s confident in his ability to handle the situation he confronts”.

This confidence reveals at times his arrogant side. That’s always been there (as when, in events before his downfall as head of Tourism Australia, he wrongly thought prime minister John Howard would side with him rather than with the minister, Fran Bailey). The arrogance is more concealed now, but shows when he summarily dismisses awkward questions as of interest only to the “bubble”.

His natural instinct is for command and control, but this operates subtlety in managing his ministers. He gives them rein in their own areas, but tells them not to freelance outside their remit. Their “charter letters” emphasise goals and performance.

He exhorts backbenchers to shut up publicly, but can’t make them, and they’ve been speaking out on subjects from China to superannuation and industrial relations. This is messy but quite different from the destructive sniping of the last term.

Read more: Grattan on Friday: Being a Trump 'bestie' comes with its own challenges for Scott Morrison

In looking at Morrison’s positive first year it’s easy to forget how things can turn. Strangio identifies at least three risks: the party’s right could decide to “seize the moment” and make divisive demands; the electorate could, over time, become frustrated with Morrison’s tendency to incrementalism, interpreting it as inertia; or conversely, Morrison might eventually surrender to an impulse to which all prime ministers are prone - to leave some big imprint, and thereby plunge himself into political choppy waters.

There’s a bit of muttering in some Nationals’ quarters about how Morrison has intruded onto their turf. He’s dominated the drought issue, and sees as part of his constituency rural “quiet Australians”. The Nationals did well at the election, but leader Michael McCormack is treated (respectfully) as a pushover. A Nationals source contrasts Morrison with Howard, who let the junior Coalition partner be seen having a few wins.

Morrison has found himself spending a lot of time on foreign policy; with the low-key Marise Payne backward in coming forward, he is effectively his own foreign minister.

Donald Trump has lionised the PM, quite a mixed blessing (and naturally Australia has signed up to the American request to be part of the freedom of navigation mission in the Middle East).

The Pacific Island leaders gave Morrison both barrels over Australia’s climate change policy and coal, when he was wedged between them and domestic politics. Australia’s “Pacific step up” bogged, at least momentarily, in the acrimony of Tuvalu. 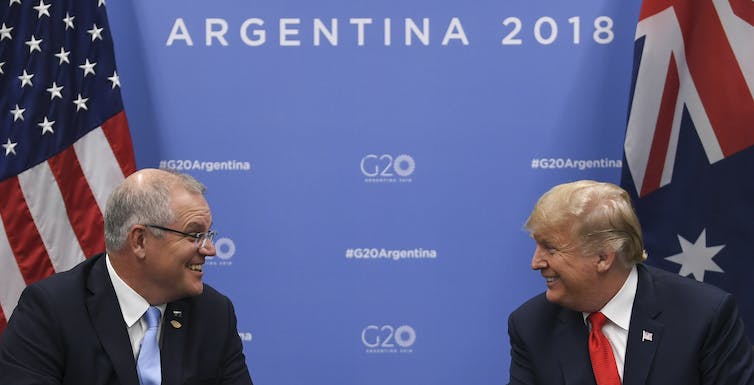 Morrison has struck up a bromance with Trump, becoming the first prime minister to score a White House state dinner since John Howard in 2006. Lukas Coch/AAP

Morrison finds himself in office at a time when managing Australia’s relationship with China is becoming increasingly challenging. Indeed, central in his current preoccupations is policy on China, which includes complex responses in resisting that country’s various encroachments on Australian sovereignty. It’s far from being all about trade.

But the most immediate worry is the economy. Will the “global headwinds” turn gale force, requiring more government stimulus, threatening the surplus? With wage growth sluggish and interest rates, already near rock bottom, cut twice since the election, the Reserve Bank prods the government to help with the load.

So far, Morrison and Treasurer Josh Frydenberg are holding back and hoping that the tax package will do enough. The quiet Australians, the people who rode with Morrison’s promises about ensuring good economic management, are watching, quietly.