Australian women want to breastfeed but many struggle. And the most disadvantaged face the biggest challenges.

Among them are mothers who are involved with the child protection and criminal justice systems, who need extra support. But such support has been lacking.

However, Australia’s new National Breastfeeding Strategy, released on Saturday, is the first of its kind in the world to directly call for health, justice, and child protection systems to support women to breastfeed.

The plan is to keep mothers and babies together as much as possible, and provide them with skilled breastfeeding support.

Read more: Babies and toddlers are living with their mums in prison. We need to look after them better

How many infants does this affect?

In Australia, 14,000 infants are involved with child protection services, and about 2,000 are in foster care.

Breastfeeding is often abandoned despite the best interests of the child and the mother’s wish to breastfeed. Milk that mothers express isn’t always transported to infants in foster care, and women can be actively discouraged from breastfeeding during contact visits.

Read more: Complex trauma: how abuse and neglect can have life-long effects

We don’t know how many Australian infants are affected by their mother’s incarceration; police, court and prison systems do not routinely collect information on whether these women even have children.

However, extrapolation from Western Australian research suggests perhaps as many as 600 children aged 0-2 years have mothers in prison nationally. These children are hidden victims of crime, punished by judicially enforced separation. While their mother’s imprisonment may be as little as a few weeks, this separation can severely disrupt the mother-child relationship, and can end breastfeeding.

Why supporting breastfeeding is important

Breastfeeding provides vital protection against infectious and chronic diseases, obesity and sudden infant death syndrome (or SIDS). All of these are more common in disadvantaged families.

Breastfeeding is also important as it affects a mother’s ability to provide care. Women who interact with the child protection and justice systems often have experienced poverty, domestic violence, and childhood abuse. These traumas can make it hard for them to look after their babies.

Breastfeeding helps by reducing stress responses, enhancing mothers’ desire to be with their babies, and promoting maternal behaviours. These behaviours include affectionate touch, eye contact, speaking gently, and responding to the baby, the types of behaviours that build healthy attachments between mother and child. In vulnerable mothers, breastfeeding can greatly reduce rates of maltreatment, particularly neglect.

A 2015 expert report for the South Australian Royal Commission on child protection highlighted breastfeeding’s important role in a “good childhood”, not only for nutrition, infection risk, and healthier development, but also for encouraging secure attachment and infant mental health.

The same evidence was provided to policymakers on women’s prisons:

“…it is clearly established that breastfeeding is in the best interests of the child”.

What can we do to support breastfeeding?

We need child protection policies that recognise the importance of breastfeeding and the role it plays in protecting child health and strengthening maternal care giving. Skilled breastfeeding support should form part of early intervention services for vulnerable mothers.

In child protection investigations, every effort should be made to keep mother and child together including in supervised mother-baby residences. Where physical separation is necessary, mothers should be given support to express milk to be delivered to their infants. 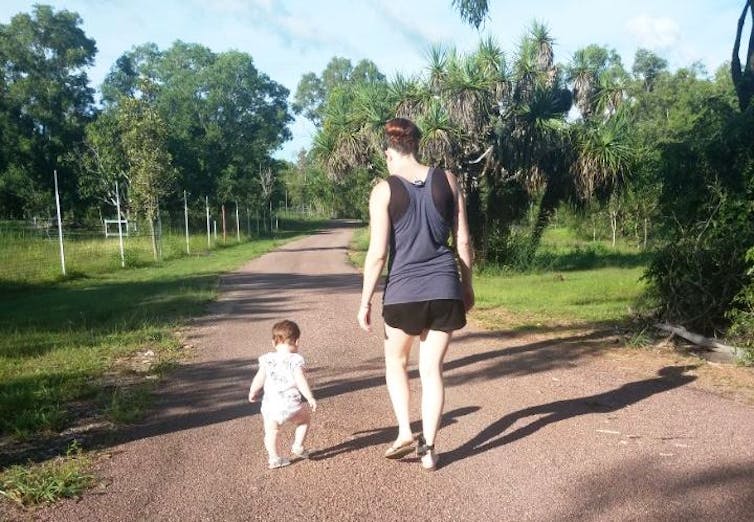 This mum was sentenced to home detention rather than prison because of the needs of her breastfed baby (image used with the mother’s permission). Author provided

In the justice system, incarceration of mothers should be avoided whenever possible. If mothers are imprisoned, mother-baby units, where women keep their babies with them, should be routinely available, including to those on remand. Crucially, programs in mother-baby units should involve intensive parenting support, including for breastfeeding. This helps infants thrive despite their mother’s history of trauma.

Mother-baby units also provide broader social as well as economic benefits; they reduce the likelihood of women re-offending saving A$90,000 per prisoner per year (the average cost of having a person in prison).

Read more: The National Breastfeeding Strategy is a start, but if we really valued breast milk we'd put it in the GDP

Yes, there are challenges

There are challenges to implementing support for breastfeeding in the child protection and criminal justice systems.

Integrating services in health, child protection and the justice system can be difficult. The logistical problems of supporting breastfeeding when mother and child are physically separated are significant. Maternal drug use (whether that’s illicit, prescribed or alcohol) can also be a concern. Although this does not necessarily mean mums who use drugs are prohibited from breastfeeding.

There may be a place for milk banks to fill gaps; even at A$200-300 a litre, donor milk for newborns may still provide ample return in social, economic and health benefits to the wider community. These can range from reduced health care costs to better child development and educational achievement, and improved child health.

Supporting breastfeeding for mothers in child protection and the justice system is not easy, but worth it. It would improve maternal health and reduce health and development disadvantage for the most vulnerable children. Evidence tells us it will also reduce reoffending, the cost of prisons, and foster care. Everyone wins.

Breaking the cycle of disadvantage, child abuse and crime starts with helping vulnerable mothers provide "good enough” care to their babies. Supporting breastfeeding is part of helping mothers to do this.