With the rise of fad diets, “superfoods”, and a growing range of dietary supplement choices, it’s sometimes hard to know what to eat.

This can be particularly relevant as we grow older, and are trying to make the best choices to minimise the risk of health problems such as high blood pressure, obesity, type 2 diabetes, and heart (cardiovascular) problems.

We now have evidence these health problems also all affect brain function: they increase nerve degeneration in the brain, leading to a higher risk of Alzheimer’s disease and other brain conditions including vascular dementia and Parkinson’s disease.

We know a healthy diet can protect against conditions like type 2 diabetes, obesity and heart disease. Fortunately, evidence shows that what’s good for the body is generally also good for the brain.

Read more: People living in rural areas may be at lower risk of Alzheimer's disease

As we age, our metabolism becomes less efficient, and is less able to get rid of compounds generated from what’s called “oxidative stress”.

The body’s normal chemical reactions can sometimes cause chemical damage, or generate side-products known as free radicals – which in turn cause damage to other chemicals in the body.

To neutralise these free radicals, our bodies draw on protective mechanisms, in the form of antioxidants or specific proteins. But as we get older, these systems become less efficient. When your body can no longer neutralise the free radical damage, it’s under oxidative stress.

The toxic compounds generated by oxidative stress steadily build up, slowly damaging the brain and eventually leading to symptoms of Alzheimer’s disease.

Read more: What causes Alzheimer’s disease? What we know, don’t know and suspect

To reduce your risk, you need to reduce oxidative stress and the long-term inflammation it can cause.

Increasing physical activity is important. But here we are focusing on diet, which is our major source of ANTIoxidants.

There are plenty of foods you can include in your diet that will positively influence brain health. These include fresh fruits, seafood, green leafy vegetables, pulses (including beans, lentils and peas), as well as nuts and healthy oils.

Fish is a good source of complete protein. Importantly, oily fish in particular is rich in omega-3 fatty acids.

Laboratory studies have shown omega-3 fatty acids protect against oxidative stress, and they’ve been found to be lacking in the brains of people with Alzheimer’s disease.

They are essential for memory, learning and cognitive processes, and improve the gut microbiota and function. 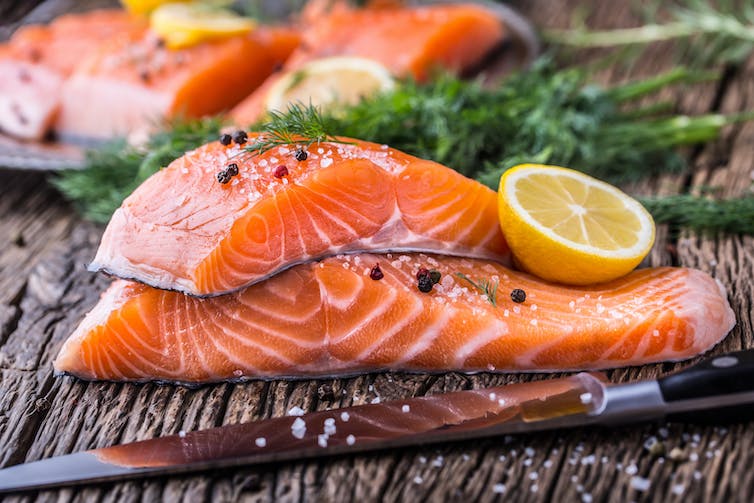 Oily fish, like salmon, is high in omega-3 fatty acids, which research shows can benefit our brain health. From shutterstock.com

Low dietary intake of omega-3 fatty acids, meanwhile, is linked to faster cognitive decline, and the development of preclinical Alzheimer’s disease (changes in the brain that can be seen several years before for onset of symptoms such as memory loss).

Omega-3 fatty acids are generally lacking in western diets, and this has been linked to reduced brain cell health and function.

Fish also provides vitamin D. This is important because a lack of vitamin D has been linked to Alzheimer’s disease, Parkinson’s disease, and vascular dementia (a common form of dementia caused by reduced blood supply to the brain as a result of a series of small strokes).

Read more: Six things you can do to reduce your risk of dementia

Longevity has been associated with a small number of traditional diets, and one of these is the diet of the Okinawan people of Japan. The starchy staple of their diet is the purple sweet potato – rich in anthocyanin antioxidants.

Studies in mice have shown this potato’s anthocyanins protect against the effects of obesity on blood sugar regulation and cognitive function, and can reduce obesity-induced brain inflammation.

The traditional Mediterranean diet has also been studied for its links to longevity and lower risk of Alzheimer’s disease.

Green vegetables and herbs feature prominently in this diet. They are rich sources of antioxidants including vitamins A and C, folate, polyphenols such as apigenin, and the carotenoid xanthophylls (especially if raw). A carotenoid is an orange or red pigment commonly found in carrots. 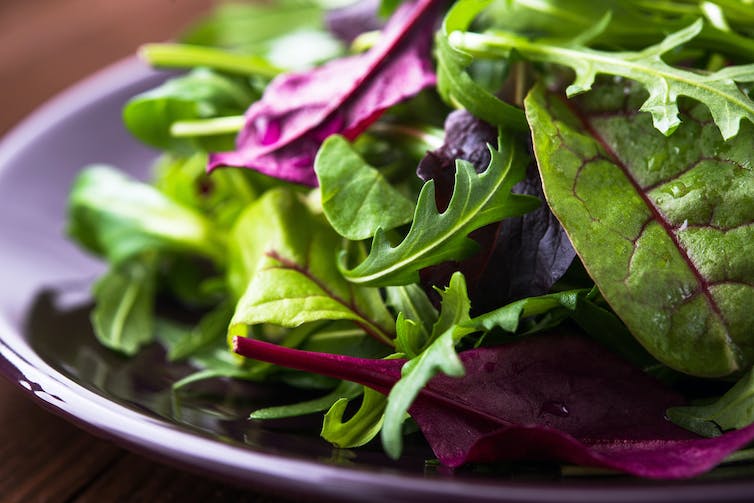 Green vegetables and herbs provide us with several types of antioxidants. From shutterstock.com

The antioxidants and anti-inflammatory chemicals in the vegetables are believed to be responsible for slowing Alzheimer’s pathology development, the build up of specific proteins which are toxic to brain cells.

Parsley is rich in apigenin, a powerful antioxidant. It readily crosses the barrier between the blood and the brain (unlike many drugs), where it reduces inflammation and oxidative stress, and helps brain tissue recovery after injury.

Read more: What is the Mediterranean diet and why is it good for you?

Beetroot is a rich source of folate and polyphenol antioxidants, as well as copper and manganese. In particular, beetroot is rich in betalain pigments, which reduce oxidative stress and have anti-inflammatory properties.

Due to its nitrate content, beetroot can also boost the body’s nitric oxide levels. Nitric oxide relaxes blood vessels resulting in lowered blood pressure, a benefit which has been associated with drinking beetroot juice.

A recent review of clinical studies in older adults also indicated clear benefits of nitrate-rich beetroot juice on the health of our hearts and blood vessels.

Equally as important as adding good sources of antioxidants to your diet is minimising foods that are unhealthy: some foods contain damaged fats and proteins, which are major sources of oxidative stress and inflammation.

Where these conditions are are all risk factors for cognitive decline and Alzheimer’s disease, they should be kept to a minimum to reduce health risks and improve longevity.