Of all the mantras for modernism, the one I think most befitting for Australian mid-century modern houses is L'esprit Nouveau – The New Spirit. These houses represented more than style; they reflected a new Australian spirit that emerged in the postwar era.

Modernism was established in Europe at the beginning of the 20th century. An intentional shift away from classical tradition, it was informed by new technology and mass production. While early modernism was weighed down by the avant garde and elitism, mid-century modernism - which includes architecture from the 1950s to the late 1970s - became accessible and was embraced internationally.

The current resurgence in popularity of mid-century modern houses in Australia has been spurred by websites such as Modernist Australia, social media groups for “MCM” enthusiasts, public exhibitions, and even real estate agents dedicated to selling the Modern House. 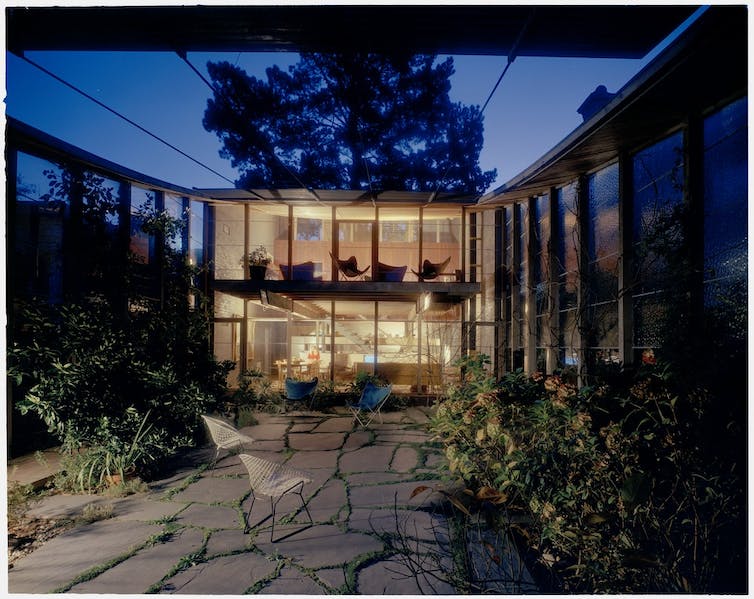 Read more: Explainer: what is modernism?

A fascination with mid-century modernism has also been explored in the two-part documentary Streets of Your Town, hosted by comedian and self-proclaimed “architecture tragic” Tim Ross. He describes how the popularity of these houses was underpinned by purpose as much as style:

Modernism may have had its birth in Europe and its glamour in America but I think it found its egalitarian purpose, unrivalled anywhere else in the world, in Australia’s suburbs.

Some enthusiasts point to the television series Mad Men as the catalyst for international mid-century modern revivalism. But visual culture has also been central to its popularity in Australia. As these homes emerged, so too did the suburbs, which became the setting for much of Australian television and theatre. 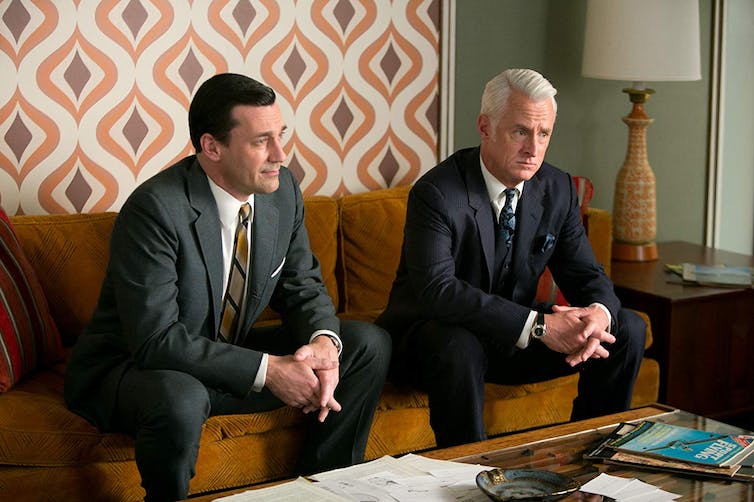 I think this is central to the popularity of these houses. Even if you didn’t grow up in one, you probably watched a family who did on television.

I grew up in a late 70s, mid-century modern home. It was designed by a draftsperson, not an architect, but featured many of the design elements commonly associated with the style. Just like the Kerrigan family in The Castle we had a pool room, complete with a purpose-built bar.

Early 20th century Australian architecture, especially during the interwar period, had been burdened with the nationalistic desire to create a distinctly Australian house.

In the postwar era, however, the cultural landscape shifted from the wide brown land to the interior of our suburbs, and especially our homes. Australian culture was motivated by the kind of self-consciousness often associated with modernism. This was reflected in mid-century modern houses, with their humble facades and efficient planning. 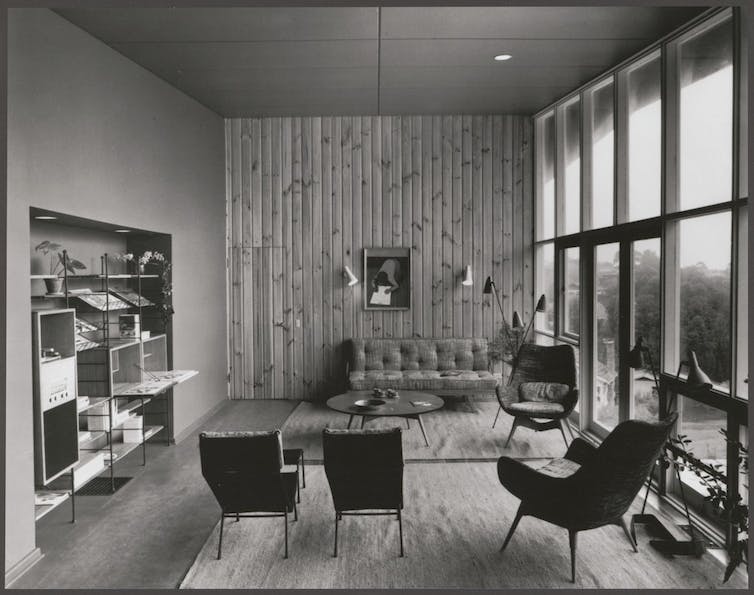 Ray Lawler’s 1955 play Summer of the 17th Doll exemplifies this shift and is considered to be the first Australian play to be set inside a house. Around the same time, in 1956, Melbourne was hosting the Olympic Games, and with a shortage of hotel accommodation, families were asked to billet athletes. This placed Australian homes, in a very real sense, on an international stage.

It was this event that inspired the character Mrs Norman Everage (later Dame Edna Everage) of Moonee Ponds. The first Edna Everage show revolved around her domestic preparations for international guests in the lead up the 1956 Games. Barry Humphries then took a satirical view of Australian domesticity to an international audience.

Humphries’ critical view on Australian life, alongside books such as David Horne’s The Lucky Country (1964) and architect Robin Boyd’s The Australian Ugliness (1960), represented a maturing of Australian culture, which emerged from critical reflections on our position in the world through art, architecture, literature and film.

Boyd and Humphries shared an enduring friendship, and there are many overlaps in their critique of Australian domesticity. Boyd’s work has undoubtedly been at the centre of the current mid-century modern revival. The attention it attracts is not just about his architecture, but also the sentiments that informed it. For Boyd, architecture was not an isolated discipline, rather it possessed the capacity to shape, and be shaped by, broader social, political, economic and cultural ideas.

Boyd was instrumental in setting up the Small Home Service in 1947, which delivered designs for modern, small, flexible, and affordable homes in response to postwar housing shortages. It is probably this aspect of his work that resonates the most – a solution to housing inefficiencies led by professionals for the greater good, not financial greed. 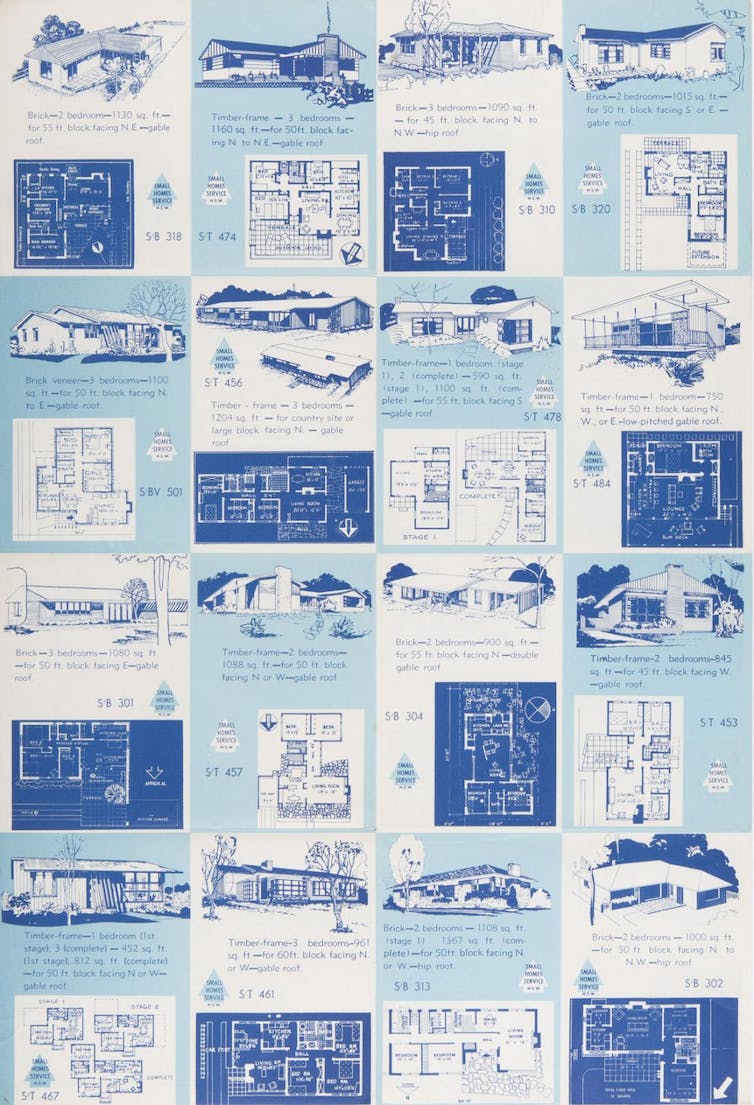 Of course, there is much to admire about Boyd’s designs, and those of the other architects working for the Small Home Service. Externally, the designs were refined and simple. Australian mid-century modern houses are unique with their pitched roofs in contrast to the flat roofs found in America and Europe. They introduced open plan living areas, a move away from a series of rooms connected by hallways.

This openness brought more light into living spaces, as did bigger windows and glass sliding doors that connected inside and outside. And, as Ross’ book The Rumpus Room, And other stories from the suburbs (2017) describes, this openness made them great Australian party houses.

Made of prefabricated elements, these houses were a builders’ delight - and affordable. By the 1960s, most large building companies, including AV Jennings offered a range of such houses for sale. 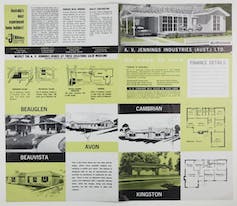 This year marks 50 years since the election party that inspired David Williamson’s play Don’s Party (1971). Williamson drew inspiration from his AV Jennings Type 15 home, built in the Melbourne suburb of Bundoora in the 1960s.

In 2011, I asked him how his home had influenced the writing of Don’s Party. He told me:

a feature of these houses was the openness and connectedness of the living, dining and kitchen areas with the bedrooms down a corridor at the back. This openness allowed one to think of a set design. It was good for the dramatic structure. I drew a floor plan and had the characters’ names on slips of paper which I slid around the floor plan so I knew who was where at any particular time.

Williamson’s reflections show how these houses were a literal backdrop to writers and performers at the time.

Cooley’s Monologue from the 1976 film version of Don’s Party.

The 1976 film Don’s Party was shot in a house built by Australian company Pettit and Sevitt, founded in 1961. Its design, known as the “Lowline”, was created by architects Ken Woolley and Michael Dysart.

Like the Small Homes Service, Pettit and Sevitt aimed to build good quality, affordable, architect-designed homes. Forty years after closing their business, they have recently re-opened it, such is the current enthusiasm for mid-century modernism.

It seems obvious that the combination of affordability and well designed homes is an irresistible quality. However, the popularity of mid-century homes, - both then and now - runs much deeper. I would argue that they are also a reflection of a nation quietly contemplating its place in the world.

The problem child of heritage

The rise of the mid-century modern house unfortunately coincided with the modernist urban planning principles that resulted in car dependent, low density suburbs on the outskirts of cities. The sprawling nature of these suburbs has contributed to the housing stress many Australians currently experience.

The location of these houses, along with their larger lot sizes, means many have now been demolished and replaced with higher density developments. There is now a sense of urgency about their protection and conservation.

Professor Philip Goad from the University of Melbourne describes modernism as the “problem child of heritage”. By this he means, it belongs to an era that has surely passed by, but is too young to be broadly admired as built heritage.

Publications such as Designer Suburbs, Hot Modernism, Australia Modern, An Unfinished Experiment in Living, and The Other Moderns have highlighted the broader cultural value of these houses. This has also been part of the mission of the Robin Boyd Foundation, which has conserved Boyd’s iconic Walsh Street House. 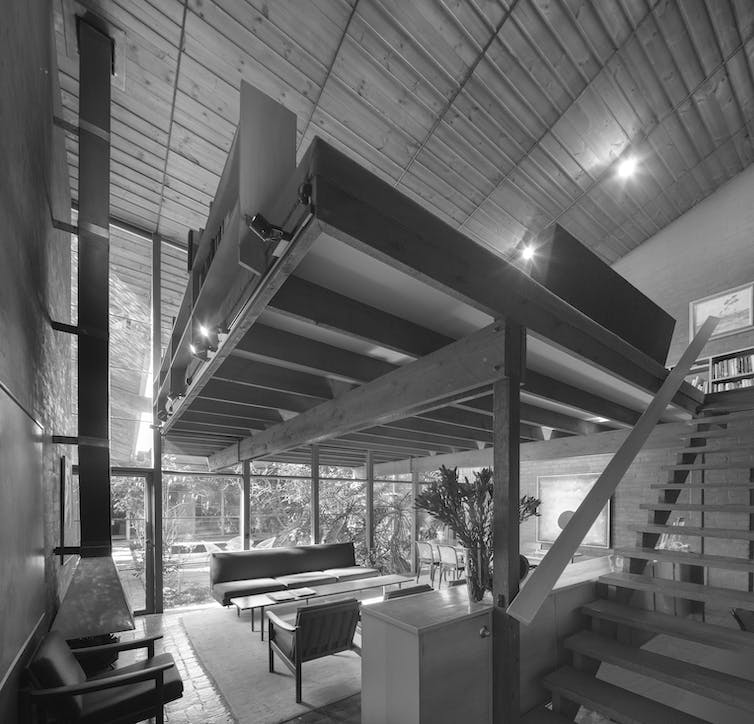 This year marks 100 years since Boyd’s birth. In August, an exhibition at Melbourne’s Heide Museum of Modern Art will celebrate ten of his most iconic houses. The exhibition aims to share Boyd’s “humanist belief that good design can improve people’s lives and the world we live in”, capturing both the ethos of mid-century modern and the sense of nostalgia that now surrounds it.

Very few surveys of mid-century modern houses in Australian suburbs exist. In 2018, Bayside Council in Melbourne started a heritage survey of them in the suburbs of Beaumaris and Black Rock. Unfortunately, less than a year later, council had abandoned the project.

The connection between Australia’s mid-century modern houses and popular culture demonstrates their cultural and heritage value. However, heritage is not simply determined by perceived aesthetic merit – it also needs to address practical issues such as the maintenance of building materials, as well as good planning principles.

The efforts of mid-century modern enthusiasts have produced greater awareness of the cultural significance of these buildings. In time, they should secure the same heritage protection afforded to other architectural styles.