Last week, Victoria Police arrested seven people who were alleged members of a professional begging “syndicate”. They were flown in from China on tourist visas.

In reporting this story, Australian media generated a considerable amount of public outrage. The idea that people who beg are somehow “faking” homelessness or...

Last week, Victoria Police arrested seven people who were alleged members of a professional begging “syndicate”. They were flown in from China on tourist visas.

In reporting this story, Australian media generated a considerable amount of public outrage. The idea that people who beg are somehow “faking” homelessness or poverty is one often used in tabloid media. Add an element of foreignness, and this story appears especially scandalous.

Most of the time, accusations of so-called “professional” begging are misleading, intended to demonise those who beg as deceitful and to legitimise the vilification of people who beg and/or are homeless.

Read more: Carelessly linking crime to being homeless adds to the harmful stigma

But in this case, it appears the label is accurate, or, more accurate than usual anyway. And given the commonalities shared by those arrested, such as age, nationality, and that they were reportedly living together in Melbourne’s CBD, there does appear to be a level of coordination involved.

Still, this doesn’t make their poverty and desperation any less legitimate, nor their exploitation more acceptable, and the use of criminal charges does not seem appropriate. 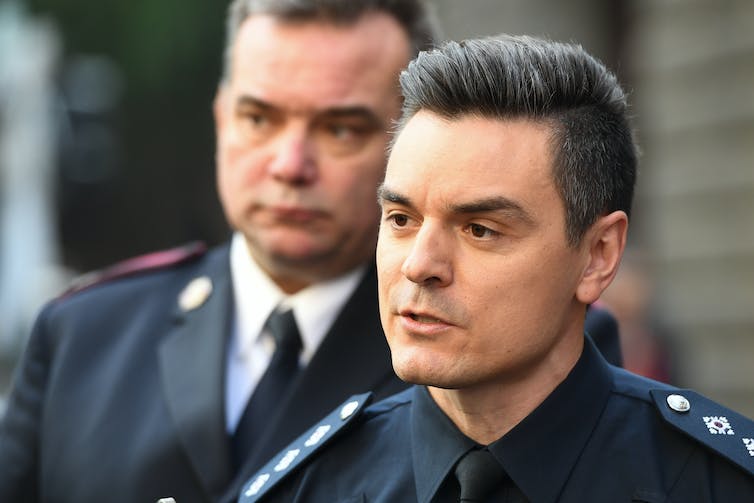 And given homelessness and begging are emotive issues prone to hyperbole and misinformation, this story highlights a few misconceptions worth addressing.

There’s no such thing as ‘professional begging’ in the law

In state law, there is no such thing as “professional begging”. Begging is a crime under Victoria’s Summary Offences Act, which makes no mention of “professionalism” or coordination other than to prohibit the procuring of a child to beg.

The people in this case have also been charged with possessing proceeds of crime. But this is only possible because begging, controversially, remains a criminal offence in Victoria, whereas other states have decriminalised the activity.

Read more: 'I didn’t want to be homeless with a baby': young women share their stories of homelessness

What’s more, it has been alleged in the past, but denied by the police, that Victoria Police has confiscated money from people begging in Melbourne.

Being homeless has a broad definition

Acting Inspector John Travaglini from Victoria Police stated that because those arrested were residing together, their claims of homelessness were “false” and “deceitful”.

But the majority of people experiencing homelessness in Australia do have access to some shelter – only a small proportion of the homeless sleep rough.

As well as rough sleeping, homelessness in Australia involves being in situations that fall below the minimum standard of housing, such as couchsurfing, staying in bedsits, hostels or boarding houses, or in living arrangements that are unsafe or overcrowded.

Given those arrested were reportedly sharing the same accommodation, they may very well meet definitional criteria for homelessness.

Read more: What’s in the name 'homeless'? How people see themselves and the labels we apply matter

You don’t need to be rough sleeping to beg

Begging and rough sleeping are not the same thing. Some homeless people beg, others don’t. Some people who have somewhere to sleep engage in begging, because they are very poor or otherwise marginalised.

Those arrested had somewhere to sleep, but it doesn’t mean they are not extremely poor.

Travaglini also claimed these people were not vulnerable, unlike others who beg. But the arrested individuals were aged in their late 60s and 70s, and allegedly flew to another country for the purpose of begging on the streets: they look pretty vulnerable to us.

So if the allegations are true, these people seem especially vulnerable. Think of the older Australians you know: how many would agree to be flown to China to beg on the streets there?

Ten years ago, the idea of people flying to Australia to beg as a scheme to make money might have seemed unlikely. But in an increasingly globalised and connected world, poverty and vulnerability have fewer geographic limitations.

It’s likely that Australia, given its enviable standard of living and economic standing, will see more examples of these kinds of activities, not fewer. And how we respond to these kinds of events will have increasing importance in the years to come.

Read more: Homelessness soars in our biggest cities, driven by rising inequality since 2001

In this case, we certainly support an intervention into this seemingly exploitative situation. But we question the appropriateness of criminal charges for those deployed on the streets to beg.

Charges may be appropriate for those coordinating this apparent scheme. But, like society’s responses to illegal drug use, levelling criminal charges at those on the bottom rungs of the hierarchy is unlikely to address anything in a meaningful way.

There is often debate about whether you should give to people who beg, and people will likely come to their own conclusions on this.

What worries us is that stories such as these further entrench public perceptions of the homeless as criminal, and of the vulnerable as exploitative and, worse, potentially dangerous.

We urge that people, should they wish, continue to give donations to those who seek them, and, more crucially, to demand action on homelessness and poverty from their politicians. Because continued inaction on these issues, whatever form they take, is the true crime.