When he founded the blog CapitalWeather.com 15 years ago in Washington DC, Jason Samenow was working for the US government as a climate change analyst. A full-time media career was probably the last thing on his mind.

But the blog – which became known as the Capital Weather Gang – gained traction, and was gradually absorbed by The Washington Post.

These days, Samenow is chief meteorologist and weather editor for the Post, where his work is driving audience growth and engagement. 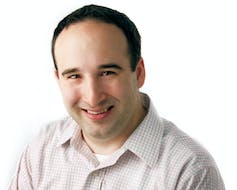 Jason Samenow began his career as a climate change analyst before transitioning into journalism. Jason Samenow, Author provided (No reuse)

Lawrie Zion caught up with him for a chat about how digital media has changed the way that we connect to the weather, and why it’s wrong for weather editors to leave climate change out of the discussion.

Podcasts are often best enjoyed using a podcast app. All iPhones come with the Apple Podcasts app already installed, or you may want to listen and subscribe on another app such as Pocket Casts (click here to listen to Media Files on Pocket Casts).

You can also hear us on any of the apps below. Just pick a service from one of those listed below and click on the icon to find Media Files.